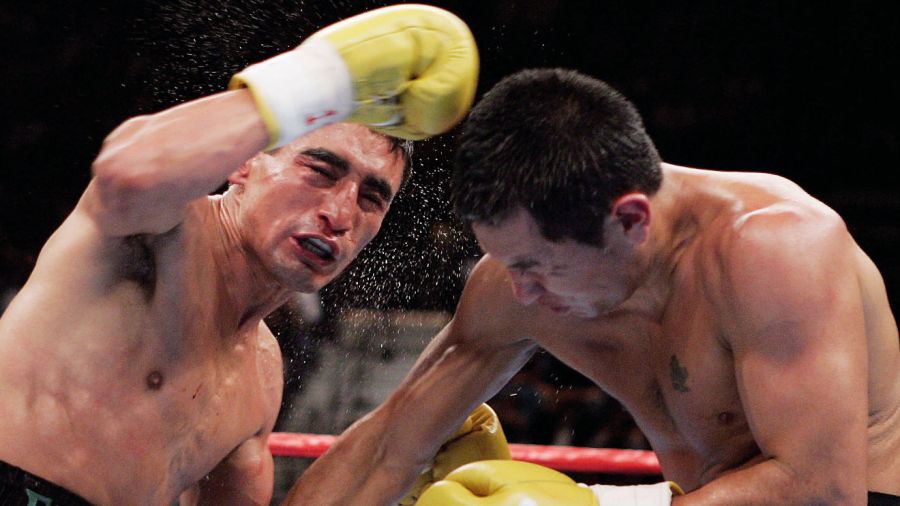 MARCO ANTONIO BARRERA w md 12 ERIK MORALES
Nov 27, 2004; MGM Grand, Las Vegas, NV
MEXICAN warriors Barrera and Morales rounded off their epic trilogy in suitably scintillating style by producing yet another memorable war. Going into the clash, for Morales’ WBC super-featherweight strap, the series stood at one win apiece. Morales won the initial meeting at super-bantam in 2000, with Barrera securing the rematch spoils in 2002 at featherweight – both decisions were disputed. Fittingly, the verdict in the rubber match also provoked debate. Just like in their previous two encounters, the bitter enemies engaged in a furious fight, with the electrifying 11th round proving to be particularly vicious. In the end, it was Barrera who came out on top and matched Morales’ achievement by becoming a three-division world titlist.

DID YOU KNOW? Then-WBO featherweight belt-holder Scott Harrison was an interested observer at ringside. He was hoping to snare a shot at the winner.

WATCH OUT FOR: Midway through the ninth, the fighters become embroiled in a clinch and Barrera cracks Morales on the back of the head with a brace of rights. Unamused by his adversary’s actions, Morales refuses to touch gloves with Barrera when requested to do so by the referee.