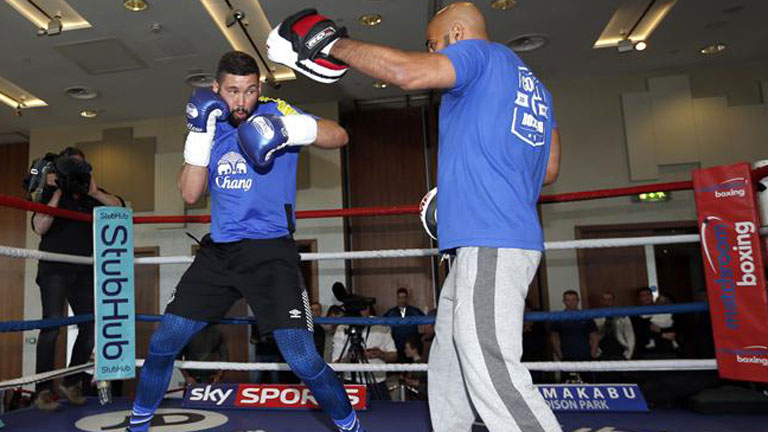 TONY BELLEW today revealed he wrote a will before his fight with David Haye earlier this month, such was his fear of being seriously hurt by the Londoner.

The Liverpudlian prevailed at the O2 Arena on March 4 when he stopped an injured Haye in the 11th round, producing one of the biggest upsets to ever occur in a British ring.

Before the fight, Haye made vile promises to leave Bellew hospitalised and that he intended to “cave his skull in,” and Tony was all too aware of the danger he faced that night.

“There’s people in situations and it’s very, very frightening. The situations some fighters have been in recently. I’ll be honest, it scares me,” he told Boxing News.

“People don’t know this but I wrote a will before that fight. It’s the only time I’ve ever done it in my whole career. I wrote a will two weeks before leaving everything to my missus in case anything happened to me because I knew he was capable of really, really hurting me.

“Don’t get me wrong, I knew I’m capable of hurting him too. That’s the extreme measure I went to. To hear this guy saying the things he was saying, I just found it absolutely disgusting.”

Haye has been called before the British Boxing Board of Control because of his pre-fight comments.

Bellew, a terrific self-promoter, knows there is a line when it comes to building interest in a fight and feels Haye went way over it this time. 2016 saw several tragic incidents in British boxing, including the death of Mike Towell, and Tony insists there is no place in the sport for the types of comments Haye made.

“I can’t even lie and tell you it’s water under the bridge because it’s not, I think he’s an arsehole,” he continued.

“I think he was wrong for saying the things he said. I could’ve forgiven him if he came out after the fight and said that he’d said things just to get a reaction out of me but he hasn’t, he’s come out and said he actually meant every single word he said. That disgusted me even more.

“It’s all done with now and the only person who went to hospital that night was that clown. Funny how it all works out.”

Haye ruptured his Achilles tendon in the sixth round but battled on until Bellew dropped him for a second time in the 11th prompting Haye’s trainer, Shane McGuigan, to throw in the towel.

He has since had surgery on the injury and intends to fight on with the hope of returning to the ring this year.

There’s always a reason not to, an excuse to put things off for another day or a better time. Set your goal and turn it into your motivation pic.twitter.com/mBH4lZSuw4

“I knew his body would fail him,” Bellew said.

“Your muscles can grow and get more powerful, the things that can’t grow are your ligaments and your tendons. When your muscles get to a certain size, they can grow at an amazing rate, but you can’t grow your ligaments and tendons and they can rupture or break or snap. He didn’t snap his Achilles, he ruptured it. If he’d have snapped it he wouldn’t have been able to walk, let alone throw a punch.

“He’s doing a good job of getting the sympathy vote but in all honesty he gets no sympathy from me after all the things he said in the build-up.”