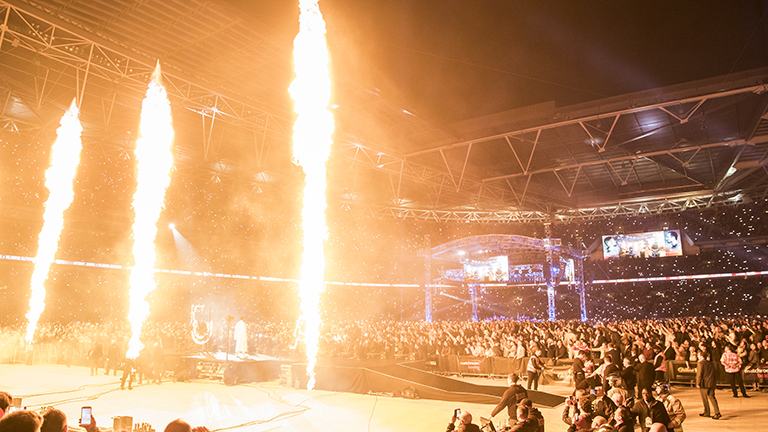 AS things stand, Sky Sports will have two key focuses for their pay-per-view (PPV) platform from September onwards – Anthony Joshua and Tony Bellew.

There are no PPV shows finalised for the rest of the year yet, but when the new season kicks in toward the end of the summer, the two heavyweights are both guaranteed to top separate cards.

Joshua is already a proven PPV commodity, and Bellew maximised his marketability back in March when he stopped David Haye in a high-profile PPV fight. He now has several options; a Haye rematch, or fights with WBC heavyweight champion Deontay Wilder and WBO king Joseph Parker.

“The two focal points of the pay-per-view from September are Anthony Joshua and Tony Bellew, whether it’s Bellew-Haye, Bellew-Wilder, Bellew-Parker, that sort of thing. Those are our two primary commitments for pay-per-view,” promoter Eddie Hearn told Boxing News.

The next steps for both men are still being hashed out, but the most likely scenario is that they are involved in rematches. While Bellew could fight Haye again, provided his terms are met, Joshua looks set to resume hostilities with Wladimir Klitschko after their record-breaking encounter in April.

Outside of Joshua and Bellew, there are other potential PPV options that Hearn is monitoring.

“Then you have the other potentials; [Kell] Brook-[Amir] Khan, although with the injury maybe push it back a bit, [James] DeGale-[George] Groves and then there’s others, [Dillian] Whyte against Wilder maybe.”

There was almost a PPV show scheduled for July 1, with DeGale defending his IBF super-middleweight title against Callum Smith. When Smith elected to pursue his mandated shot at the vacant WBC title, Hearn and Sky chose to wait until the new season to re-introduce the platform.

All three PPV main events so far this year – Haye-Bellew (March), Joshua-Klitschko (April) and Brook-Errol Spence (May) – have more than delivered and, interestingly, they all ended in the 11th round.

“I’ve done Haye-Bellew, I’ve done Joshua-Klitschko, I’ve done Brook-Spence but the good news is, with all three of those we’ve not had one complaint over value for money and that’s so important,” Hearn continued.

“You get a few complaining about the undercard but generally, when it’s all said and done, people say it was a great night of boxing. That’s massive for the sport. Once you have one stinker you’re really in a tough spot so we decided to have no pay-per-view in July and then go from September when the strategy changes. I think we have such an unbelievable stable of talent from the Olympics and over the next year to 18 months you’ll see all those guys headlining Saturday night Fight Nights.”

That change in strategy is going to see a dip in the number of regular Sky shows broadcast on a Saturday night, but an increase in international coverage.

Sky and Matchroom recently launched their NXTGEN series, designed to showcase young talent on smaller shows, and there will be a spate of these cards in the new season.

“You’ll see a massive change to our strategy come September, which is going to be more NXTGEN shows, fewer Saturday night Fight Nights – not that much fewer, but much bigger [ones] because fans will start to feel that on Saturday night they’re not getting enough,” Hearn outlined.

“They’ll see a pay-per-view show and go ‘OK, I’ll pay for that.’ But you’ve got to feed them with more quality and more international fight nights. We have to be more active in that market to give Sky subscribers the full package. [Andre] Ward-[Sergey] Kovalev is a good example, [Gennady] Golovkin-Canelo [Alvarez] we’ll also look at. We’ll look at buying, at least, one big international show a month. That’s going to be the answer to the whole package and Saturday night Fight Night should be like mini pay-per-views where there might be two or three world title fights on the card.”