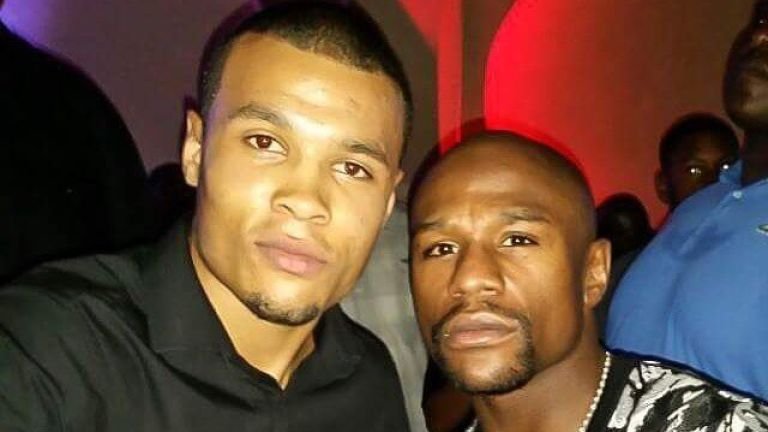 CHRIS EUBANK JNR plans to spend more time out in Las Vegas with Floyd Mayweather Jnr for future training camps but is concerned the superstar’s lavish lifestyle is giving the wrong impression to young members of ‘The Money Team’ like Gervonta Davis.

Eubank – who takes on Avni Yildirim in Stuttgart on October 7 as part of the super-middleweight World Boxing Super Series – flew out to Vegas this summer and trained alongside Mayweather and Davis as they prepared for their bouts against Conor McGregor and Francisco Fonseca respectively. As expected, Mayweather won at a canter against the MMA star but Davis lost his IBF featherweight belt on the scales after again coming in above the division limit.

Eubank – who dropped below the super-middleweight 168lb limit while out in Vegas – admitted he was surprised to see Mayweather attend his own strip club and pool parties when the McGregor contest was so close. Such behaviour shouldn’t be mirrored by Davis – whose nickname is “Tank” – if he’s going to fulfil his potential.

“Two weeks before the [McGregor] fight I watched him [Mayweather] walk out of the strip club at 5 in the morning,” Eubank revealed. “It’s surreal, it’s like ‘Jesus’, and then the next week he’s at a pool party. He’s not drinking and he’s got his section up at the top and he’s just chilling and stuff, but it’s like ‘you’re at a pool party and you’re about to fight in a week and half’s time, who does that?’ Well, Floyd does that.

“Everybody is different and the thing with Floyd is, in a good and a bad way — well it’s good for him obviously because it works for him. But then you have kids who are looking at that and thinking ‘Oh I can do that, I can go to the club and party and do whatever I want and then fight.’ And you just can’t. You just can’t. With him, I can pretty much guarantee you that lifestyle wasn’t how he got to where he is. He was doing it the right way — not the right way because he’s still winning so the way he’s doing it now is the right way for him — but the traditional way. That’s how he started and that’s how every fighter needs to start.

“And it worries me a bit with ‘Tank’ because I know ‘Tank’ is spending a lot of time with Floyd and he’s his hero and a lot rubs off and he’s great talent, a lot of potential. But I just don’t want him to look at Floyd and try to copy him too much outside of the ring because the guy lost his belt and his title.”

Eubank, who rarely takes a break from training whether he has a fight scheduled or not, has no fear that the hedonistic temptations of Sin City would turn his head.

“I’m a grown man, I’m 28 years old now,” he said. “I’ve been doing this for so many years I’ve got my routine and i’m very strong mentally. If you’re not strong mentally, if you’re young, you can get swept up, you can get sidetracked, you can see a lifestyle and that’s what you want and you start putting boxing second. So it is easy if you haven’t got the right mindset. So the guy [Davis] has to be careful.”

After the McGregor debacle, won by Mayweather in the 10th round, Floyd told the media he planned to be a trainer. Eubank would be open to being trained by Mayweather but doesn’t believe the American superstar has it in his makeup to become a full-time coach. But should the opportunity to work with Floyd Mayweather Snr present itself again, Eubank would take it.

“To be honest I don’t ever see that happening [Mayweather Jnr becoming a trainer], even though he said that,” said Eubank. “I think Floyd has way too much going on to be standing around holding pads for other fighters. But in terms of his father and training at his gym, that’s definitely something I’ve considered and I think I will start, not for whole camps, but for a period time go out there, get the sparring, get the work with Floyd. It’s a great facility there, it’s a great city to be a fighter, as long as you don’t get caught up in the distractions then it’s a great place to box. So in the future, after this fight, I think that’s definitely something I’m going to be looking to do.”

Eubank was also privy to the controversial ‘doghouse sparring’ – where two fighters take part in limitless rounds that can continue until one is knocked out or surrenders – which occurs in the Mayweather Gym.

“I’ve seen a few, I’ve been involved in a couple,” said Eubank. “It’s one of those trademark things fighters do now. ‘We’re going to go to Floyd’s gym and see if we can put on a show’ Especially if Floyd’s there. If Floyd’s there then everyone is like “I want to get in, I want to prove I’m the man and maybe I’ll get signed or maybe he’ll take an interest in me’ because he does. He takes an interest in fighters and takes them under his wing and suddenly they’re flying off to different countries with him or going to parties with him. That’s how the guy is. If he likes you and believes in you he’ll bring you along with him.

“Is it good? It’s good when it’s two fighters who are evenly matched. I’ve seen it sometimes where you get guys who are pros being put in with guys who have had one or two fights and then it’s just like a show. A show for everybody except the guy who’s getting battered. But the guy who’s getting battered doesn’t know it, they’re just like: ‘Oh I’m in Floyd’s gym, I just want to get in there and do it.’ So in those cases it’s not good but when it’s two guys who are evenly matched then it’s the toughest man wins and those types of moments of attrition, that’s what makes fighters strong. You have to go through pain and hurt in that gym to become something in the ring so it’s a good thing.”

While Vegas and Mayweather look to be in Eubank Jnr’s future, he has no plans to permanently turn his back on  his seafront set-up at Hove, where he is trained by Ronnie Davies and guided by his father, Chris Eubank Snr. And with just over a week remaining before the Yildirim showdown, the Brightonian is right on track.

“I’ve been back from Vegas for five weeks. As soon as I got back I got straight into full training camp. I actually lost weight out there in Vegas with the heat and all the things I was doing. I stepped on the scales when I got back and I was 11st 10, so I’ve actively been putting weight on since then. I’m at 12st now.

“If it is not broke, don’t fix it, right? Look at the success i’ve had in my boxing career, having this as my base, having my team as my base. So if it’s worked for this long, until it stops working I can’t really see why I would change it. And it confuses me when people say ‘Oh you need to get rid of your dad’ and you need to do this and that. Well, if I was to start losing or if I start not getting paid well, then fair enough.

“But everything is on track, I’m on track, I’m in a perfect, I’m in a great position. I’ve got got three amazing fights coming up, good amount of money coming in, training is right, facilities are right, mindset is right. So for now, Team Eubank is everything I need.”