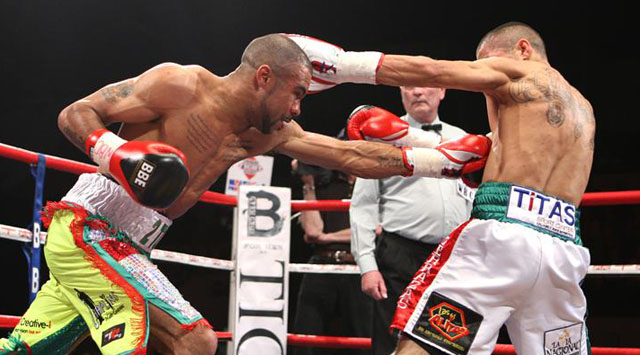 Rendall Munroe reveals five moves, and a strength and conditioning routine, to break down your opposition

IT’S a final eliminator for the world title but things are not going according to plan. Four rounds have elapsed and, even by your most conservative estimate, your opponent has won all of them. For the first third of the contest you have attempted to win a chess match, using your back-foot boxing skills to, in theory, gain check-mate, but it has not happened; in fact, it’s not even stale-mate. The ability to move into forward gear is paramount. If you cannot out-manoeuvre your rival, you must out-fight him, beat him up and break him down.
Leicester’s Rendall Munroe, a former European super-bantamweight champion who relinquished the strap after five sucessful defences, was in just such a situation in April 2010, in a WBC Final Eliminator against Victor Terrazas. The talented Mexican had built a healthy lead but Munroe’s strategic adjustment – from counter-punching to his trademark pressure-fighting – changed the fight. Rendall was relentless, applying intelligent pressure until his opponent could take no more and was stopped in round nine. While Munroe is comfortable going
backwards, pressure-fighting has proved his more effective style and, he insists, is just as technically complex as scientific warfare.
“Even though I can box, I saw in my early fights that size and strength was the key for me,” Munroe, huge for a super-bantam, explains. “A lot of people seem to think you’re just a brawler – that you just come inside and push people around – but there is a strategy and technique to doing it. You can stand in front of someone all day long and be punched around because if you’re not making the other man work, making him miss, it’ll have no effect.
“It all comes down to training. I like to push the limit all the time. I don’t want to give up. Because of that I never give up in the fight.”
With that in mind, Munroe explains five pressure-fighting moves, with explanations provided from Rendall and trainer Jason Shinfield; Jason also offers S&C advice.

1. Shinfield: You want to put them on the back foot and you’ve got to make them move a way they don’t want to go. Every time they try to get out of a position, you have to step across them to keep them there, gradually working them into a corner.

Munroe: They know they have to keep working to keep me away.

2.  Munroe: I’ve stepped across to the right and blocked his path, forcing him to move in the opposite direction, to his right. I throw a shot as I move forward, again to make him move in the opposite direction. It’s like a defender in football; he wants the attacker to move away from the goal, so you keep edging forward, making him move where you want.

3. Munroe: Now he’s trapped. I’ve shifted my body slightly to the left, blocking off his escape route and keeping him in the corner. I’ve moved him gradually into the path of my left hand which, as a southpaw, is my most powerful punch.

Offensive slipping
Avoiding their jab can help you to attack

1. Munroe (all three): You’re trying to break their confidence because if they’re jabbing and not hitting, they start to worry about wasting shots and they lose the confidence in throwing it. The jab is slowing down because of that.

2. You use your reaction time, waiting for them to throw. You start to move when their jab is only half-extended, so by the time it’s fully thrown you’re out of the way and they are still in range for your counter.

3. With their confidence dropped, they’re not sure now what to throw. If you can keep moving forward while avoiding their shots – slip, advance, slip, advance – they will start to think they are going to miss with every shot they throw.

2. Munroe: A lot of boxers don’t like fighting someone like myself because I’m always there, just inside, so they have to use double their workrate and strength to keep me on the end of their punches. I keep my hands up and my elbows tucked in so I take their shots on my guard. rolling away with the shots, taking the power out.

3. Munroe: If you’re close enough where they want to go to the left and you don’t want them to, you’re not supposed to but you can give them a little shoulder nudge to move them to where you want them to be.

Shinfield: That moves them back and you drop your back leg out at the same time to establish some range.

4. Munroe: This little shove forces my opponent to move back, knocks him off balance, disorientates him and puts me back in punching range.

5. Munroe: Then I can land my shot before he has got his defences back together.

Shinfield: You drive off the back leg, using the distance you established.

Body work
The most effective way of slowing a man down

1. Munroe: You’re making them work at a higher rate and faster pace than they’re comfortable with, making them breathe more than normal, so hitting the body takes more out of them.

2. Shinfield: The best body shot is to dip the front knee and pop it up off the front knee. Let your waist do the work, rather than your arm. Try to stick your punch under his bottom rib.

3. Shinfield: Keep your spare hand up by the side of your face.

Munroe: Body shots are better in the ropes and corners because they’re under pressure and tucking up

Combination time
Your opponent is tired: time to unload
1. Munroe (all three): I like the right hook to the body, right to the head, straight left. I feel strong throwing that and it seems to work. Again, you dip off the front leg and look for their ribcage.

2. You’re looking to bring their hand down with the first shot. That punch to the ribs makes them instinctively move their elbow and arm down and you bring your arm back for the next hook.

3. Their guard has dropped just enough for you to land the right hook to the head. This shot knocks their head over to their right, straight into the path of your left.

4. It’s a small space to work in so you use your legs and waist more than your shoulder rotation to generate the power. A lot of my work is compact and tight more than it is loose.

Rope work for slipping: You’ve got a rope across the ring, corner to corner diagonally; it’s just like a washing line. And then you dip under it in both directions continuously, sometimes moving forward as you’re doing it, sometimes back. This sharpens your reflexes. The rope is basically the opponent’s jab, so you slip it going forward and back. We get them doing two rounds a day, a couple of days a week in the last two weeks before a fight. That’s because it’s not hard work and it’s specific technique work instead of high-intensity work. When you’re in with a boxer and you utilise good head movement, you take away their jab – and that takes away all they’ve got; it allows you to get inside and pressure them to fight.

Squats/jump squats: The jump squats build explosive muscle power rather than just normal squats, which are for building general leg strength. In a six-week programme, when they’re in tick-over mode, they’ll do S&C once a week. With three-to-four weeks left they’ll be doing it two-to-three times a week. When fighting inside, a fighter is generally close up and they haven’t got the room to get leverage, so they have to create the power from their legs.