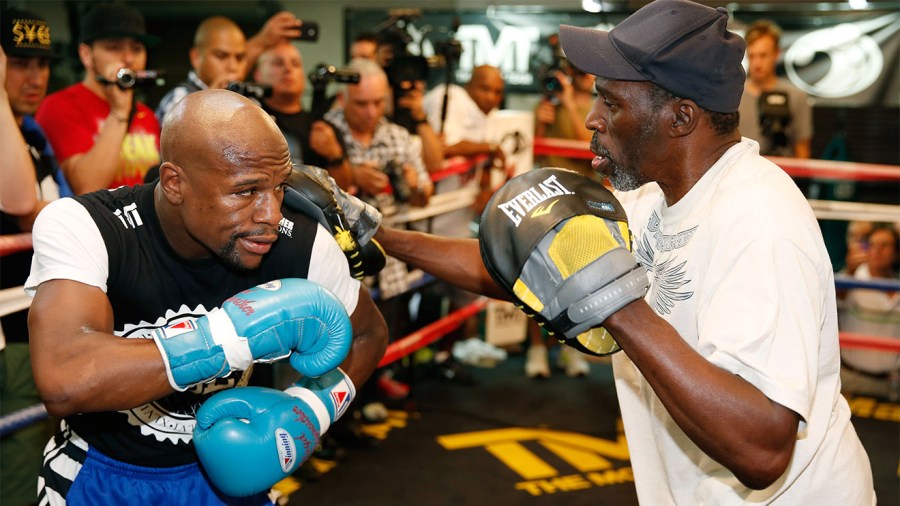 Nigel Collins pays tribute to Roger Mayweather, who died this week at the age of 58

ROGER MAYWEATHER is gone. He died March 17 at the age of 58, leaving boxing bereft of one of its most colorful and controversial characters of a generation. He claimed he got his “Black Mamba” nickname watching a nature show on television. As menacing as it sounds, he might have sold himself short. Although the snake’s bite can kill a human in about 20 minutes, it is generally shy and nervous, and uses its incredible speed to escape threats.

Mayweather wasn’t shy or nervous, and escaping was not in his DNA. Win or lose, in shape or out, he came to fight. He knew his trade and could box well behind a long jab, but it was his willingness to get in a firefight that endeared him to the fans. Risky behavior was part of Roger’s makeup since he was a kid.

“Roger was a hell-raiser,” his brother Jeff told Tris Dixon, author of Money: The Life And Fast Times Of Floyd Mayweather. “Oh my god. He was a bad, bad kid. Bad. Bad. Bad. He was never in gangs or anything like that. He was a one-man gang.”

Mayweather bought that one-man-gang attitude to the pros and things happened fast—maybe too fast. He turned pro on July 29, 1981, with a first round knockout of Andrew Ruiz. Fourteen fights later he was the WBA super featherweight title-holder, after stopping Samuel Serrano in the eighth round.

At that point Mayweather seemed to have an unlimited future, and while he eventually forged an outstanding career, inconsistency and lifestyle probably prevented him from being all he might have been. True, his lantern jaw wasn’t exactly bulletproof, but he was only stopped six times in 72 bouts, and his willingness to trade with anybody has to factor into any discussion of his punch resistance.

Two successful title defenses raised Mayweather’s profile. He was by then an adult version of the hell-raiser he was as a kid. It’s what made him the fighter he was—fearless to a fault.

It was quite a shock when Rocky Lockridge knocked him out with a sweet right hand in the first round of Mayweather’s third defense. It changed everything, and when he lost a unanimous decision to Tony Baltazar in his next bout the up-and-down rhythm of Roger’s career began. There would be more peaks than valleys, but he would never quite regain his original sheen.

“The best fight with Roger was when he beat Sammy Serrano in Puerto Rico,” his trainer Jesse Reid told ESPN.com. “He beat him in his backyard, just destroyed him. Roger, if he would’ve done roadwork, he could’ve been a champion for a lot longer, but he was never a guy who liked to run. Then he started living a little high on the hog, and that caught up with him.”

If the very best of Mayweather was indeed over, he certainly had more than enough left to accomplish a lot more before he was done. Thanks to his pleasing style, Roger continued to be a regular face on TV and on November 12, 1987, he stopped Rene Arredondo in the sixth round to regain the WBC title.

He defended the title five times in 1988, arguable the best year of his career. It was the year of his magnificent shootout with Harold Brazier, which Roger won via controversial split decision. Less than 10 hours after the fight, Mayweather absorbed more punishment when he wrecked his car in a head-on collision while driving to a press conference. Sometimes it seemed it was a miracle that he lasted as long as he did.

Then there was the unforgettable night Mayweather punched out Lou Duva. Roger had just won a unanimous decision over Vinny Pazienza in defense of the title, when Paz’s hotheaded manager, who was upset about some after-the-bell exchanges, charged across the ring headed straight for Mayweather. Duva blew his cool on a fairly regular basis, but it was usually one of those Muhammad Ali-style “Hold me back” bluffs. This time nobody held him back and when Lou got within range Roger dropped him with a right hand.

Roger lost the title to Julio Cesar Chavez in hid next defense, May 13, 1989. He fought on with some success until May 8, 1999, but he never won another major title. Quite a few of his loses were to the very best of his era, including future Hall of Famers Pernell Whitaker, Kostya Tszyu and Chavez (twice), ending with an overall record of 59-13 with 35 of those wins inside the distance.

Training his nephew Floyd Mayweather put Roger back in the spotlight. This was especially crucial while Floyd’s father Floyd Snr was incarcerated. Roger was just as salty and outspoken as a trainer as when he fought, maybe more so. He delighted in telling people, especially the media, that they “Don’t know s**t about boxing,” which became his tagline.

Mayweather never lost his combative nature. When Zab Judah floored Floyd with a low blow and rabbit punched in the 10th round of an April 2006 title fight, Uncle Roger was in the thick of the brawl that erupted, an action that resulted in a suspension and hefty fine. Still, he had his nephew’s back. That’s got to count for something.

By 2015 all the punches caught up with Uncle Roger. Floyd said that in his early 50s his uncle seemed like a man in his 80s who was fading fast. Roger didn’t recognize family members and would wander off and get lost. It was watching his uncle’s deterioration that convinced Floyd to retire after his Andre Berto fight.

Roger Mayweather was a scoundrel who lived life to the max and left a mixed legacy. There was the fighter, dressed in a black robe emblazoned with images of a snake and the skull and crossbones, the one with a rocket launcher of right hand who never ducked anybody. Then there was volatile man who, following an incident in August 2009, was sentenced to a year of probation, domestic violence counselling, community service and a fine of $1,000.

Mayweather was the sort of profane character you don’t easily forget, an imperfect man who gave so much of himself to the sport he loved. For all his faults, he will be missed.