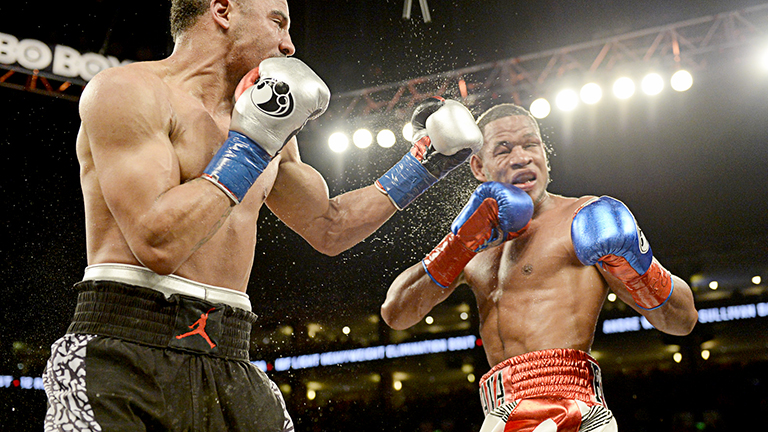 Kieran Mulvaney was ringside for Andre Ward's most recent fight. Here's his report

WITH no disrespect to Edwin Rodriguez or Paul Smith, when Andre Ward entered the ring to face Sullivan Barrera in front of his hometown crowd at Oakland’s Oracle Arena (on March 26), it felt like the return of a prodigal pugilist who had been absent since demolishing Chad Dawson in September 2012. Which is not to pretend that Ward’s wins over Rodriguez and Smith didn’t happen; more that they felt like bouts Ward had to undertake, with a half-hearted sigh, just to remind people he still existed.

The battle with Barrera felt different. Not because the Cuban émigré, now living in Miami, was expected to be the first to hang a loss on the American, but because he was big and strong and skilled enough that, if you squinted just right, you could believe that he just might. More than that, there was a sense that Ward, free from injuries and his promotional disputes with the late Dan Goossen, was now committed to going on a genuine run of fights for the first time in years; and the biggest sign of that commitment was the fact that, after years of campaigning at super-middleweight, Ward was stepping up to light-heavyweight, offering the mouth-watering promise of an ultimate meeting with Russian 175lb wrecking ball Sergey Kovalev.

Ward’s fight week demeanor – intense and no-nonsense – added to the sense that he knew what was at stake this time. “There’s no fight with Kovalev if I don’t beat Barrera,” he said, before adding slightly dismissively that, “if I can’t beat this guy then I don’t deserve a title shot anyway.”

The opening stages of the contest, in front of an enthusiastic crowd of 8,532, briefly suggested that maybe, just maybe, he wouldn’t, that the squinted-at future might conceivably come to fruition. After a cagey early round, in which Ward sought to feint Barrera out of position and the Cuban advanced slightly stiffly behind a solid jab, Barrera succeeded in cracking the normally hard-to-hit Ward in the second with a couple of short right hands. Atypically, Ward was in a real, honest-to-goodness fight, and he appeared willing to stand and trade, too. The two men swung punches at each other with venom, and although Ward generally got the better of the exchanges, he was getting hit more than usual, and on more than one occasion actually missed wildly.

It felt as if the two men wanted to do each other legitimate harm, too, each taking turns to hit each other after the bell – and drawing an admonition from referee Raul Caiz Snr for so doing – and Ward dropping Barrera hard with a left hand to the gonads in the eighth, at which point Caiz deducted a point.

Ward also floored Barrera with a legitimate punch, a left hook to the temple that short-circuited Barrera’s equilibrium and deposited him on his rear, in the third; by the fifth, perhaps with ring rust and anxiety leaving him, he had tightened up both offense and defense, slipping most of Barrera’s punches and missing far fewer of his own. Barrera retained an air of menacing danger for several more rounds, but by the ninth, the wheels had started to fall off. His offense now consisted more of mauling and holding than hitting, as Ward finally squeezed the last life out of the contest.

“I give myself a B+,” Ward said afterward. “I said I wasn’t going to use the layoff as an excuse, but I didn’t manage to do some of the things I wanted to do.”

“The shots that he was getting hit by Sullivan, Kovalev would destroy him,” Abel Sanchez, Barrera’s trainer, said at the post-fight news conference. “The Andre Ward that fought years ago is different than today. Kovalev is at the top of his game, it’s impossible to think Ward has even a slight chance.”