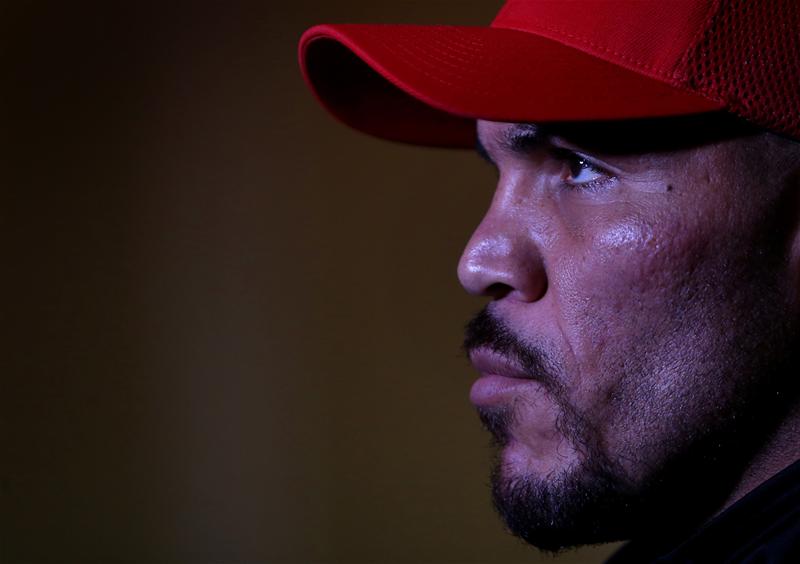 A MILD surprise added another element to Fight of the Century week.

Weighing in for his vacant WBO lightweight title fight with Takahiro Ao tomorrow night at the Cosmopolitan of Las Vegas, Raymundo Beltran scaled a pound over the 135lbs limit. Beltran had hopped onto the scales around an hour before the weigh-in began and, following the exchange of concerned looks in his team, a long delay to the official proceedings ensued. Beltran was afforded, as per Nevada rules, an hour to make weight.

Beltran returned an hour later but despite being dried off by his team and weighing in naked, still scaled 135.4lbs, a quarter-pound over the lightweight limit. The likelihood is that the fight will go ahead but with the vacant WBO title at stake for Ao only.

Before the disaster on the scales, Beltran said: “I’m happy to be part of such a big weekend. I’ve been working so hard, enjoying every day of struggle and pain. I’m ready.”

“Mine will be the first ever fight on TruTV so that’s history,” said Zewski. “I’ll bring my A-game then move on to making a name for myself. My wife is very pregnant right now, she’s due May 11 and she told me ‘Take care of this and come back as soon as possible.’ Trust me, you don’t wanna argue with a very pregnant woman!”

“This is my first fight with trainer Ismael Salas and it’s been a great camp,” Magdaleno said. “I’m ready for any fighter at 122lbs. We’re gonna make a statement this year.”

Todd DuBoeuf on Top Rank’s first Friday Night Knockouts show on TruTV added: “This is a really exciting time for boxing and us at Top Rank. The concept of this is that HBO and TruTV have the same parent company – Time Warner. The big pay-per-views are on Saturday nights on HBO while Friday night is a great platform.”

THE OUTCOME OF MAYWEATHER-PACQUIAO REVEALED