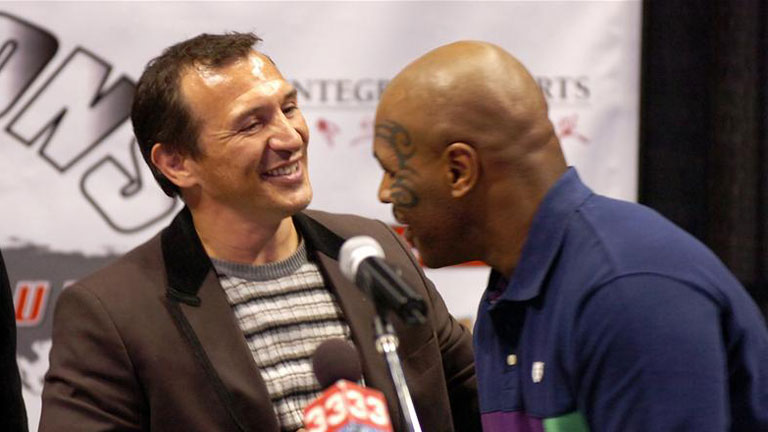 RAY MANCINI wanted to be just like his daddy. His father, Lenny “Boom Boom” Mancini, became the No.1 contender in the lightweight division in 1942 before he was drafted for service in World War II. Wounded in action, he would never fight for the title, nor be the same fighter again. Not long after Ray was born in 1961, he became transfixed with the tale, adopted the family nickname, and set out to win the title his father could not. In 1982, after a heroic loss to the great Alexis Arguello in a bid for the WBC lightweight title, he knocked out Arturo Frias to claim the WBA belt in the greatest night of his life. A United States hero was born.

Six months after winning the championship he was matched with Deuk-Koo Kim, a South Korean fighter not expected to put up much of a challenge at the new outdoor arena at Caesars Palace, Las Vegas. The fight – broadcast live on a Saturday afternoon by CBS, and watched at ringside by Frank Sinatra –
was savage. The brave challenger eventually went down in the 14th round, and died four days later. Mancini was forever altered. He lost his title two years later to Livingstone Bramble, and after two unsuccessful comebacks, he would eventually retire for good in 1992 with a record of 29-5 (23). In June 2015, 11-and-a-half years after his father’s death, Ray “Boom Boom” Mancini was inducted into the International Boxing Hall of Fame in Canastota, New York.

Your father was a huge influence on you as a child. What are your earliest memories of that relationship?

I remember when I was a little kid and I’d sneak down to the cellar to look at his fight clippings. Every month or every week he’d let me look at them, and they were these old haggard pages. When I got older I’d climb up onto the chair and be able to reach them all myself. It was a huge thing for me. One of my favourite pictures was of him with his eye swollen completely shut, his lips were bloody and he had a towel on his head. It was taken after a fight that he had won. It’s still the most beautiful picture I have of him. He looks beautiful to me in that picture. It sounds strange but that was everything I wanted to be. People saw one thing looking at that, and I saw something else.

It must have been hard that he wasn’t around to see your Hall of Fame induction?

Yeah, but I know he must have been so proud and so happy. It’s unfortunate but I look around and I believe my parents are with me, and they were looking down on me so for that, I’m very happy. They were with me in spirit.

Ramirez was such a big favourite, they wouldn’t take the bet in Vegas, and in Vegas they take anybody’s bet. They wouldn’t even put it up on the board because I was such a big underdog. But to be the best you’ve got to fight the best. It was probably one of the smartest fights I ever fought. He thought I was going to come right at him, but I counter-punched, and I boxed him. That night I was like Willie Pep [laughs].

Then came Arguello – one of the greatest fighters of all time. Was there any fear going into that contest?

No, no, no. Alexis was one of my heroes, I used to look up to him. But I thought I was catching him at the right time. I’d seen his fight against Jim Watt and I didn’t think he was that impressive. But that fight shows why experience is the greatest teacher. He would set traps early in the fight, I made mistakes in the fight, and later on I was caught out by those traps. But look, the reason that the true championship distance is 15 rounds is for that reason. If that fight was
12 rounds, I’d still have been undefeated. I wouldn’t have lost my title to [Livingstone] Bramble either. Look, against Arguello, I fought well but in the end I got caught, and I lost the fight to a true champion.

How hard was that first loss to deal with?

Oh, it was hard. Not because I had lost – anyone can lose a fight – but because it was for the world title. I thought I’d let my family down, my friends down, my city [Youngstown, Ohio] down, and I never thought I would get another shot. At that time it wasn’t like there were all these organisations like there are now. Back then, that was it [just two].

But two fights later, both wins, you did fight for the title again – against WBA champion Arturo Frias in 1982. You won in the first round.

Oh man. That was euphoric. I knew then and I know now that I will never have that feeling again. The only thing that compares to that – and only compares, it wasn’t better – was when each of my children were born. It was the greatest feeling ever. I had accomplished my lifelong dream. It was everything.

What did it mean to your father?

My father was so happy. He wanted it for me. It meant so much to him. But it wasn’t just my family, it was my city. My people are a big part of my success because they carried me a lot further than my body wanted to go at times. They cheered for me, they were wonderful for me.

The fight against Deuk-Koo Kim came later that year. He died as a result of the injuries he experienced in losing that contest. Can you put that experience into words?

When I turned pro I did it to be a world champion for my father. Then I wanted to be the best fighter I could be for my city of Youngstown. I wanted to be an honourable world champion. I fought for the love of the sport. After that fight I lost all love for it. That’s when it became a business. But I made peace with it a long time ago, I said my prayers, I had my faith and it got me through.

I still think about it. But I don’t feel bad about it. I think about Kim, his memory and his family. Sure. But I was able to move on and if you can make peace in life, and move on, that’s what is important. We all have regrets but if you hold on to things in this life it can take over. You can get stuck in the past and never move forward. Always look forward, not behind.

Two years later came the upset losses to Livingstone Bramble and, even though you were still a young man, you didn’t fight again for four years until you lost to Hector Camacho in 1989. Looking back, was your decline a result of the Kim tragedy?

Yes. I had my security and I had fallen out of love with the game. I spoke to my business partner and I knew I could retire. I was looking for a reason to get out. The reason I came back was because the Camacho fight was one that I always wanted and it didn’t happen [initially]. We talked about it and it was basically made but the WBA wanted me to fight my mandatory. But I always wanted that fight and I felt bad that it didn’t happen when it should have done so when it was offered [in 1989] I said, ‘Yeah’. I was still young enough, I was only 28. I didn’t want to live with ‘what ifs’.

You were not given much of a chance in that fight during the build-up.

Come on, I beat Camacho. Listen, fighters know and I know I won that fight. He knows he lost that fight and even afterwards he said, ‘I know I lost, but they gave it to me, so I won!’ That was his explanation but I wasn’t an active fighter, I know why they didn’t give it to me. I wasn’t going to fight after that, they knew that, so they didn’t give me the decision. It wasn’t hard to come back, but I made it clear it was one fight only.
But when I came back again three years after that [a 1992 loss to Greg Haugen], that was just my ego. I should never have had that fight.
I was happy, I was doing a play in New York and it was offered to me. I wasn’t an active fighter, and with my style, I had to be active.
It’s not like I was Sugar Ray Leonard who could go away for four years and come back and look good – for three rounds he could move around and get acclimatised to boxing again. But I was a pressure fighter. And to be on top as a pressure fighter you’ve got to be on top and be in the mix. But I wasn’t. My ego got me my butt kicked.

What’s your opinion of boxing now, and the likes of Floyd Mayweather?

Floyd is a special fighter but all that ‘TBE’ stuff? He’s delusional. Sugar Ray Leonard? Roberto Duran? Tommy Hearns? He wouldn’t beat any of those guys and it’s disrespectful to them. First of all fighters should just be humble, and if they’re mentioned with the best guys of all time, they should be honoured. You don’t turn round and say you’re ‘The Best Ever’. Ray Leonard is a good friend of mine and he came by and I said, ‘This kid [Mayweather] does a lot of things you couldn’t do.’ Ray looks at me. I say, ‘Relax, he couldn’t have beaten you, though.’ Leonard wanted to annihilate fighters, he didn’t want people to finish on their feet but this kid [Mayweather] will just slap you round for 12 rounds. He won’t
take any chances, and that’s the difference.

How do you think you’d have fared against someone like Mayweather?

Floyd is a special fighter. I like to think I would have done okay and I’m a pressure fighter but I would never say I would have beaten him. In a fight you have to see what happens, and being as though it’s not going to happen, I’m not going to say I could beat him. I’ll just say I think I’d have done pretty good.