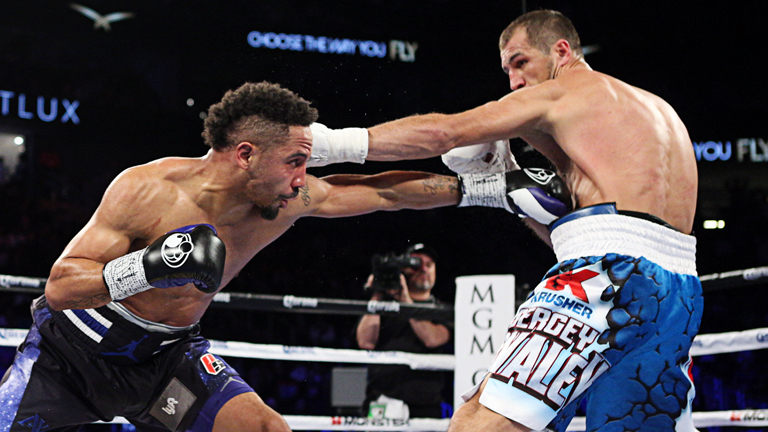 The repurcussions of Kovalev-Ward are felt

Andre Ward defeated Sergey Kovalev in a very close fight, and the win has caused some big changes. Ward – previouly ranked third – moves to No 2 with the win, Kovalev follows him into third due to how close the fight was and Manny Pacquiao (previously No 2) moves to fourth. Though Ward’s win was hugely impressive and his illustrious record is one of the best in the game, it is not quite enough to knock Roman Gonzalez off the top spot. Miguel Cotto – previously ranked eighth – leaves the rankings due to inactivity. Vasyl Lomachenko re-enters at 10th.

Marco Huck stays in third place with a 12-round decision win over Dmytro Kucher, who is unranked.

Andre Ward leaps to No 1 after dethroning division leader Sergey Kovalev. Kovalev drops to No 2. Isaac Chilemba leaves the rankings after losing to Oleksandr Gvozdyk, who takes his place.

George Groves holds onto his place at fifth with a decision win over unranked Eduard Gutknecht.

Gennady Golovkin moves to No 1. The Kazakh wrecking ball sat behind Miguel Cotto – who we ranked at No 1 due to his win over previous division leader Sergio Martinez (Cotto lost to Canelo, who recently moved back to super-welterweight, thus bringing Cotto back to the No 1 spot). Avtandil Khurtsidze enters at No 10.

No 10 Simphiwe Khonco keeps his place with a decision win over unranked Nkosinathi Joyi.