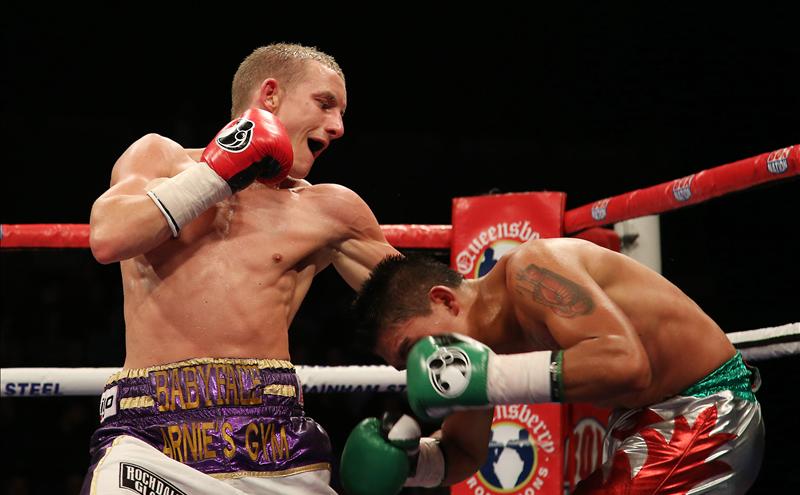 PAUL BUTLER won a world crown in a record fewest number of fights for an Englishman when he leapt up to bantamweight to capture the IBF belt from Stuey Hall. He returns immediately to super-fly to try to win a second world title from Zolani Tete.

Essential to his achievements is of course his performance in the ring and daily work with trainer Anthony “Arnie” Farnell in the boxing gym. But Butler has also been using the strength and conditioning coaches at the No Limits Gym in Liverpool, Chris Tamm and Danny Withington. They offered some insights into the support they’ve provided to help him dance through the divisions.

Butler’s boxing is at the heart of his training regime. His strength and conditioning work has to complement it, not hinder it. “We’ve got to make sure that if we do anything with him, the next day he can still go in and perform with Arnie and box because that’s what he’s there for,” said Chris Tamm. “We don’t want him to have sore legs or sore arms or anything like that. The Monday at the start of the week when he’s at his freshest, he’ll do his lifts, again the lifts are not too strenuous, it doesn’t last too long, then Tuesday he’s fine, Wednesday he’s back in with us, we’re working on minor stuff again or developing new techniques, so again he’s fresh for the Thursday and Friday. His toughest session will be the Saturday, conditioning.”

Danny Withington emphasised, “One of the major things is we have contact with Arnie often and also [Paul’s] dad. So we have good contacts with them, we work as a team together. When we first met them we had a real good sitdown and a good chat and discussed what the possibilities are and where we were going. That was discussed prior to the first camp. That was done so that me and Chris could periodise everything, prepare everything.”

They didn’t try to force new exercises on Butler until he was ready for them. “When he first came to us, he’d never even lifted anything. We didn’t straight away get him under a bar. We put him on bodyweight [exercises] first because we believe in setting a good foundation up first. If someone can’t do a press-up, we don’t understand why they should get under a bench and start trying to bench press,” Chris explained. “Then you introduce unilateral stuff, dumbbells, once they’re comfortable with dumbbells, then you introduce bars, once they’re comfortable on strength then you introduce speed and power.”

Paul progressed from bodyweight exercises, to using the TRX suspension training before getting on to lifting weights, firstly with compound lifts for strength, before eventually advancing to Olympic lifts for speed and power. Danny continued, “What we’ve started introducing now are Olympic lifts, so a hang clean, power cleans, hang snatches. Too many people start that far too early when they’re not ready. So we’ve created a solid base by doing compound lifts, so it allows us to be more aggressive with our functional training.”

“I’m not into the running at all,” Chris revealed. Long distance running can have a negative impact “on the joints, inflammation, lowering testosterone levels, actually being bad for the body because it raises cortisol, which is the stress hormone”.

“The fighters will still do the occasional run, once a week, just to know that they’ve got it in the legs to go that distance but we do sprint work and conditioning-based stuff,” he continued.

“You want to try and work at maximum effort for between 10 to 30 seconds. Obviously the shorter the time, the more related to just pure power it is. The longer time you sprint for you’re starting to cross the boundaries into strength endurance and muscle glycogen stores, which is how much carbohydrate you store in the muscle. A good mark for a sprint would be 20 seconds, then rest for a minute and repeat that anywhere between six and 10 times. Or the other way of doing it is, you can make it even more sport specific and you can sprint for 20 seconds, rest for 10, sprint for 20 seconds rest for 10 and repeat that for three minutes and that replicates what’s going to happen in a ring.”

Danny added, “We wouldn’t advise you did that for more than say one round max, you don’t need to.”

“If you’re going to be a world-class athlete, you’ve got to start sorting your food out,” Chris declared. “We worked out appropriate numbers to go up in weight comfortably without putting body fat on and maintain lean muscle.”

They used a calorie counting app (you can get one from MyFitnessPal for instance) to record what food he was eating. “People think it’s different because he’s going up in weight. He’s still actually making a weight. He’s still going up to make weight,” Danny said of his move up to bantamweight. “You’re still making the weight correctly.”

“Boxers massively under-eat. Compared to the amount of work that they’re exerting their body through,” Tamm said.

“We have a set diet plan for fight camp, then another diet plan for fight week. We have a final day’s worth of food intake for the last 24 hours before he weighs in and then we also start calculating foods on the re-feed so as he’s weighed in, we’ve got a specific drink for him with set numbers of carbohydrate, and food.”

Now Butler is moving down in weight, the challenge is to keep those strength gains. “We’re going to have to recalculate it and give him less calories and less intake of food,” Chris said. “What we don’t want to do is drop him too fast too soon and then he loses too much muscle which is what we were working on trying to build on anyway. We want him to maintain as much lean muscle as possible, go in to the weigh-in with as little body fat as possible and be in prime condition.” As Withington insisted, Butler can still become “more powerful. This is his weight now, this is where he needs to win that world title again and he knows that.”