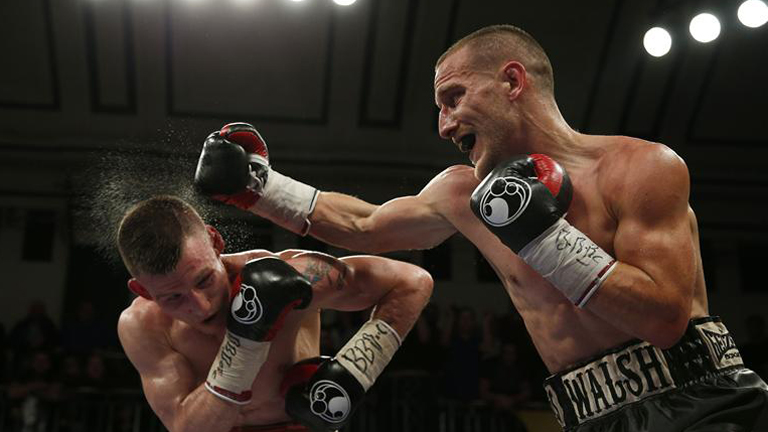 ONE week after his twin brother Liam became the IBF super-featherweight mandatory challenger, Ryan Walsh will box for the vacant European featherweight title against Dennis Ceylan at the Arena Nord in Denmark this Saturday (October 15).

The title was previously held by Ukrainian Oleg Yefimovych, who parted ways with the belt in pursuit of a WBA title shot.

Liam proved he is a cut above domestic level by dominating Andrey Klimov last weekend and current British champion Ryan will be looking to do the same against unbeaten Ceylan, who will enjoy home advantage thanks to his promoters, Team Sauerland. BoxNation broadcast in the UK.

A couple of bouts of inactivity have slowed Walsh’s progression in the past, though the Cromer slugger has come into his own in recent years. A former English super-bantamweight champion, Walsh’s first brush with top-level opposition came in 2013 when he took on current IBF featherweight champ Lee Selby.

At the time the Welshman was the British and Commonwealth champion, and he turned in a measured display to comfortably beat Walsh on all three judges’ scorecards.

‘’I don’t call it a loss, I call it a learn,’’ Walsh says in reflection. ‘’I’ve learnt so much from that one loss compared to all my other fights, and it all comes down to your attitude.

‘’If you look at a loss like it’s the end of the world, and think I’ve lost so I’ll retire, then you have lost. The only way you can truly lose is to give up. If you get back up, dust yourself down and come back, then it’s not a loss.’’

After a couple of comeback wins, Walsh won the vacant British title by dropping and outpointing Samir Mouneimne in a close encounter. The split verdict was disputed by some and certainly looked as though it could go either way, though the fifth-round knockdown was just enough for Walsh to deserve the nod.

Impressive fifth-round stoppage wins over Darren Traynor and James Tennyson followed to prove Walsh a worthy national champion. However he knows he will need to elevate himself again to claim the European crown.

‘’It will be the best possible Ryan Walsh on the night, and it will have to be as this is by far the biggest fight of my career,” he said.

“I know it’s going to be a tough, and when you’re fighting for the European title it should be a tough, but I’m ready for the challenge.

“This is the next step for me. I’ve won English and British titles, the European is next, and then I want to challenge for World honours.’’

At 27, Ceylan is three years Walsh’s junior though has been far busier in recent years. Turning pro in 2012, five years after Walsh debuted, Ceylan boxed in his first professional fight in the same arena he will meet the Brit in.

However there is a signifcant gulf in experience. First off, Ceylan has never boxed in a 12-rounder, which this title fight will be, while Walsh has boxed in four, twice going the distance.

The promising Dane has also largely fed on limited opposition in his home country and has has things predominantly his own way – though he insists he is aware of the threat Walsh poses.

“I know Walsh is a tough opponent, but there are no easy fights at this level,” he said.

“To reach the top I need to fight the best and that’s what I plan on doing. This is not just a big fight for me, but also for Danish boxing. I want to put Danish boxing back on the map and give the fans some fights to look forward to.’’

A short, stocky fighter, Walsh likes to work his way inside and let loose with crisp hooks and crunching rights. Although his head and upper body movement is decent, he has a tendency to allow himself to be peppered with shots as he moves in. His sturdy chin usually keeps him dry though.

At times it looks as though he is being outboxed, however as he showed against Traynor and Tennyson, it is usually a case of him finding his range. Traynor was dispatched with a punishing two-punch combo while Tennyson was methodically broken down.

Ceylan possesses a decent jab though he also likes to walk an opponent down and mix with them – which could make for an exicting clash with the stubborn Walsh.

It’s likely that Ceylan will build an early lead, however Walsh’s experience, hard-punching and decent engine should see him come on strong as the fight progresses. It’s difficult to measure just how good Ceylan is given his unimpressive CV, though the pick is for Walsh to land the more eye-catching blows and earn a decision on the cards.