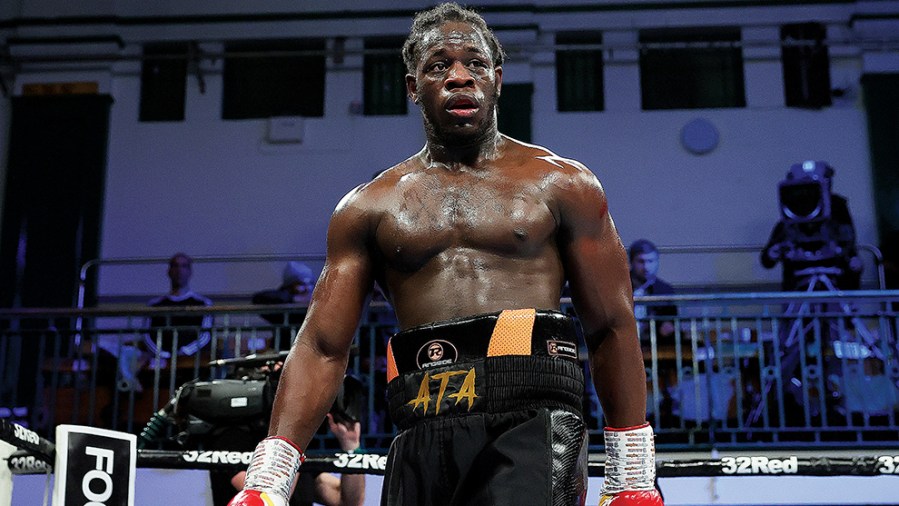 WHAT was Aloys Junior thinking?

Why would a teenage cruiserweight with ambition agree to fight a 3-0 puncher on his pro debut at only a day’s notice?

“My phone kept ringing after the fight was made,” remembered the South Londoner with a smile, “and I didn’t bother answering. I knew people would be saying: ‘You’re crazy, why are you taking this fight?’”

Junior thought his pro debut was still a week away until he checked his phone after a sparring session and saw he had missed a call from his manager, Simon Legg.

He was at the weigh-in for a Queensberry Promotions show and learned Michal Soczynski was without an opponent.

“We had asked for the fight [against Soczynski] six or eight weeks earlier,” remembered Legg, “but were told: ‘It’s his debut, it’s not a good fight.’

“I heard a Welsh lad had pulled out of fighting him at the weigh-in and the matchmaker said: ‘Would your lad take it at this notice?’

“I rang Aloys and told him: ‘He’s unbeaten, but it’s on the telly and it is a massive opportunity… If it was me, I’m not sure I would take it. I would have taken it at six weeks’ notice, but 24 hours…’ Well, Aloys didn’t think twice.

“I got pelted for it on social media. Aloys was getting messages telling him: ‘Get rid of your manager, he’s a clown.’ It was a massive gamble.”

Within 30 seconds, Junior found himself on the floor.

“My defence is usually tight,” he said, “but he threw a jab and I couldn’t catch it. The gloves were so much smaller to the ones I’m used to.

“I felt a sharp pain and the next thing I knew I was on the floor thinking: ‘What’s going on here?’

“There was so much for me to take in. I was thinking: ‘I’m not a victim, I’m not letting anyone do this to me. How do I sort this out?’”

Junior did sort it out, getting his jab working, making the Pole miss and landing eye-catching uppercuts.

“I had to learn on the job,” he said. “I was calm enough to adapt and come back.”

The knockdown was the difference between the fighters on the referee’s scorecard at the end of the four rounder. Junior was beaten 39-38, but Legg said: “Within 24 hours, I had Frank Warren on the phone to me saying: ‘Are you interested in a promotional deal?’

“We got a five-year contract – after losing his debut.”

364 days on from his debut, Junior is matched with Pawel Strykowski, 3-20-1, inside Bethnal Green’s York Hall on Friday night, a fight that will be screened live on BT Sport.

Junior, who stopped Bulgarian veteran Tayar Mehmed in a round in March, looked back on his debut and admitted: “I rushed. I could have built myself up, got used to the feel of the pro gloves and the lights, but I was only 18 years old at the time, very hungry and I wasn’t thinking too much.

“I saw something I wanted and didn’t think about it too much. I was trying to sprint when my career is a marathon. I would definitely think about it more if I got the same sort of call now. I need to think long term and how I can progress, but I’m happy with the decision I made.

Junior made headlines locally by winning NABGC and Youth honours in a 21-bout amateur career with Double Jab and Repton ABCs. He soon became known around pro gyms for his willingness to spar anyone. He was 16 years old when he sparred Daniel Dubois at the Peacock gym.

“I asked Martin Bowers to spar him,” remembered Junior, “and they were hesitant because he was knocking everyone out and Daniel doesn’t know how to control his power.

“They kept saying no, until they finally agreed and when I felt one of his jabs I thought: ‘If that’s what his jab feels like, what’s his right hand going to be like?’ I had to work go in and out, work out his feints, learn how to handle him.”