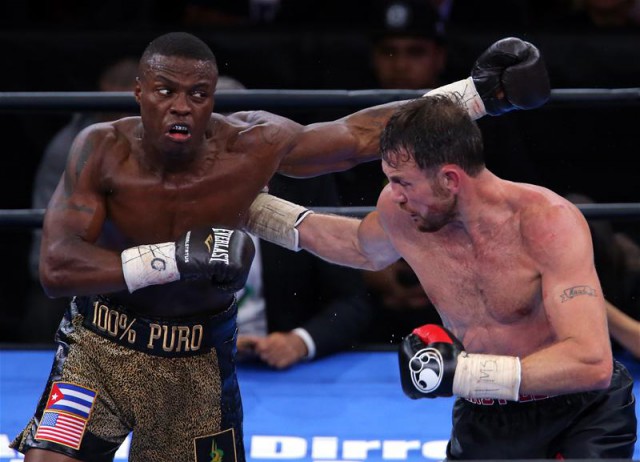 Cornelius Bundrage defends his world title on the same bill

FORMER world middleweight champion Peter Quillin returns to the ring on September 12 when he takes on Michael Zerafa at the Foxwoods Resort Casino in Mashantucket, Connecticut.

Quillin vacated his WBO belt due to personal reasons and was scheduled to fight Andy Lee for it in April, though failed to make weight so the title was not on the line.

The pair traded knockdowns while fighting to an exciting draw, and Quillin is looking forward to fighting for the first time since on this Premier Boxing Champions (PBC) show.

“I’m ready and excited to return to the ring on September 12,” he said.

“I’m already deep into training camp and preparing to be in the best shape of my career. I know my opponent is dangerous and he’s coming to make a name for himself. I’m at the top of my game and I plan to stay there.”

Australian Zerafa’s sole reverse came to Arif Magomedov last year and the 23-year-old plans to upset the odds in his first trip to the US.

“I’m excited for this fight. This sport is all about fighting the best and giving the fans what they want to see,” he said.

“This is a great opportunity and I’m looking forward to coming over there and putting on a show.”
Cornelius Bundrage defends his IBF world light-middleweight title on the card when he faces unbeaten Jermall Charlo.

The 42-year-old has not fought since winning the title from Carlos Molina last October, but is relishing the challenge.

“It’s a blessing to be the junior middleweight world champion,” he said.

“I want to thank my entire team for making this fight happen. I’m looking forward to my debut on PBC and successfully defending my second world title. Detroit is where the title is at, it’s not going anywhere. I will be ready to give my supporters all around the world a great performance, in victory.”

For Charlo this is a long-awaited title shot. He and his identical twin brother, Jermell, are both top prospects in the 154lb division.

“This is my time, I’ve never been more ready for a fight,” he said.

“I’ve dreamed about a fight like this for a long time and it’s here in front of me. I will be spectacular and I will finish Cornelius Bundrage.”

“Peter Quillin is coming off the toughest fight of his career. We are looking forward to him getting back in the ring, in anticipation of the long-awaited showdown with [WBA world champion] Daniel Jacobs later this year,” said Lou DiBella, President of DiBella Entertainment.

“Young, hungry Michael Zerafa is looking to upset the apple cart. With no pressure and nothing to lose, he will try to throw a wrench into Kid Chocolate’s lofty plans. Young Jermall Charlo looks to put his name on the 154-pound map by taking a world title from veteran champion and puncher Cornelius ‘K9’ Bundrage.