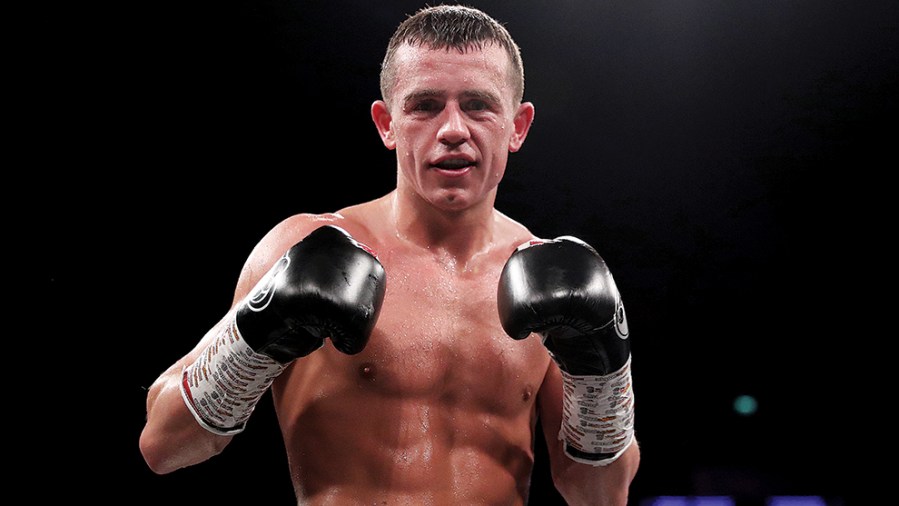 Excitement building as Peter McGrail steps up to 10-round level, writes Oliver Fennell

“YOU can’t judge a boxer off one three-round fight,” says Peter McGrail who, despite such pragmatism, a burgeoning undefeated pro career and an amateur trophy cabinet creaking under the weight of other accomplishments, is still – for now – defined by the mere nine minutes he spent in a ring at the Tokyo Olympics.

In what was the first upset of the Games, and one of the biggest, McGrail – considered among Team GB’s brightest medal hopes – was outsmarted by Chatchai Butdee of Thailand in August last year.

McGrail has been nicknamed the “Scouse Lomachenko”. It speaks to his slick, elusive defensive manoeuvres and unorthodox, spiteful counter-punching, and while the natural southpaw admits to being inspired by the Ukrainian’s style, the moniker was not of his own making.

“I never called myself this. A friend at the gym said it, and it sort of stuck,” he says. “But it is a good compliment, someone saying I box like him, one of the best in the world.”

As such, it was a surprise to see such a famously slick boxer approach his opening Olympic assignment as a straightforward aggressor.

“No excuses,” he says of the heartbreaking featherweight Round of 32 exit on the very first day of the Tokyo boxing tournament. “I just got the tactics wrong on the day

“I’d done everything perfect; I’d done the weight right, I was getting PBs on everything, I was flying in the sparring. I just pushed the fight too much. I was too eager.

“I’d sparred Butdee loads before and he’s very experienced, but I was confident I could beat him. I just didn’t box the way I usually box, weren’t as clever as I usually am. I played into his hands. He was more relaxed than me and picking me off as I was coming in.”

Going out in the first bracket, and especially by a 5-0 unanimous decision, might be seen by some as ignominious, but the stats alone offer neither a fair barometer of McGrail’s standard, nor the full context of the match. As McGrail was unseeded, he was not afforded the luxury of a comfortable opening bout. Whereas the R32 fixtures tend to be characterised by realistic medal hopes easing their way in against underdogs who’d qualified in groupings of minnow nations, in Chatchai, McGrail was meeting a three-time Olympian and one of Thailand’s finest ever amateurs.

“I was gutted, and always will be, because that was the only medal I needed to complete the set – I’d won one at every other major tournament,” says McGrail, which indicates how his Olympic experience does his reputation a disservice. The 26-year-old Liverpudlian has, after all, won gold at the European Championships (2017) and Commonwealth Games (2018), as well as bronze at the World Championships twice (2017 and 2019), Youth Olympics (2014) and World Youth Championships (2014), as well as seven ABA titles from schoolboy to senior level (the latter in 2016).

No wonder he was still a hot property when he turned pro, despite things going south in the Far East.

“Everyone knows how good I am,” McGrail says. “Promoters already knew what I’m gonna become. Probably if I’d got a medal I would have been worth more, but it’s pointless dwelling on that. I was still happy with my deal.”

That deal, which came after he made his debut for Matchroom as a free agent a year ago, was signed with Probellum, for whom he boxes in his first main event, at Liverpool Olympia, on Saturday.

Headlining a card, and stepping up to 10-round class, in just his fifth pro fight suggests McGrail is being put on the fast track by Probellum – and that’s exactly where he wants to be.

“Yeah, a million percent, I’m happy with progress so far,” he says. “It’s a bit of a step up, so I’m happy with how things are going. I want to climb the rankings as soon as I can, work towards world titles. I know I’m good enough to mix it at a good level. I want to get to the top as fast as possible.”

Opposing McGrail on Saturday night will be 21-4-2 Nicaraguan Alexander Espinoza at super-bantamweight. The Managua man is no world-beater, perhaps, but he has performed with credit against the likes of Mikhail Aloyan (dropping a split decision in 2018) and, in a previous visit to the UK, Kash Farooq, who won unanimously but left the ring cut and bruised after a hard-fought encounter. And, importantly, Espinoza has been 10 rounds or more five times.

McGrail has never boxed more than six, and that was in a comfortable shutout on his pro debut. But the prospect of 10 tough rounds against seasoned opposition doesn’t worry him.

“It’ll be sound. I spar 10 rounds a day in the [Everton Red Triangle] gym with quality lads,” he says.

“Me and Paul [Stevenson, his coach] have been working on the inside game loads. I pretty much box [in the pros] the same way as I’ve always boxed, trying not to get hit, but the difference in long fights is you might end up on the inside more, rather than in the amateurs over three rounds when you’re constantly in and out.

“I’m expecting a good, tough fight. It would be good to get the rounds in, but any boxer will prefer to get a stoppage and I’ll be coming to get that. I believe I can beat anyone inside the distance at super-bantam.”

As well as facing veteran opposition in a long fight in the main event, McGrail is also enthused by the setting.

“The Olympia is a historic venue, but I’ve never boxed there,” he says. “I remember going there as a kid years ago. When I’m older, people will ask ‘did you ever box at the Olympia?’ and I can say ‘yeah, I headlined’. That’s special.

“Any Scouse fans won’t want to miss it. The atmosphere’s gonna be a belter in there.”

Even more so because McGrail will be joined on the bill by his younger brother, Joe, who’s also undefeated (5-0) in the same 122lbs weight class. And Peter believes both he and Joe will become world champions.

“Our Joe’s been in the gym since he was seven,” says McGrail. “Now he’s 19 and he’s flying. He had the opportunity to be part of Team GB and try for the [2024] Olympics too but he turned pro [in December], and looking at the way he’s settled in to the pros, that was the right decision.

“We live together, train together, run together, eat together, and he trains with Paul [Stevenson] too. It’s just a winning formula. He’s already fought on big shows, getting that experience.

“When I think about it, the journey we’re on together and what we’re going to achieve, it gives me goosebumps.”

Oliver Fennell began writing for <em>Boxing News</em> in 2000, having populated his contacts book in the late '90s and early '00s while running a boxing website during the pioneering days of the genre. A boxing PR stint followed in the mid-'00s, before he returned to the <em>BN</em> fold by covering the Thai scene during a lengthy spell as an expat. He is now a regular contributor since relocating the UK in 2018 and otherwise has been published by a variety of newspapers, magazines and websites. Oliver is also a BoxRec editor as well as a panel member on the Transnational Boxing Ratings Board.