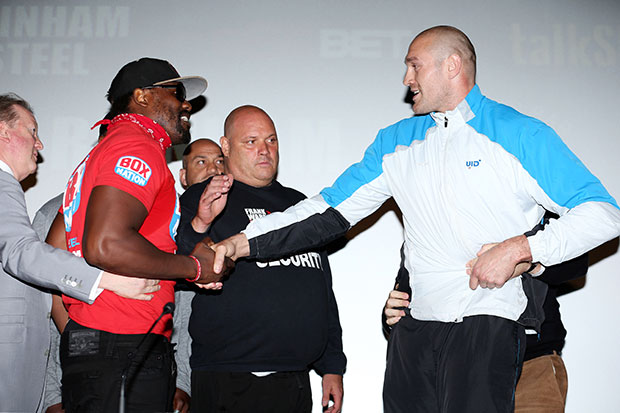 FOR the past two years, Peter Fury has used an iron fist to transform nephew Tyson from a playboy into a serious player in the upper echelons of heavyweight boxing.

The reformed con and ex-pro has drawn huge plaudits for developing both the frame and the brain of the outrageously gifted 6ft 9in traveler from Wilmslow.

‘Uncle Pete’ knows that a crushing repeat win over European champion Dereck Chisora at Manchester’s Phones 4u Arena on Saturday July 26 will almost certainly cement a challenge for one of the four major world heavyweight belts.

And despite the emphatic margins of victory in their first spat, Peter insists that his ward will arrive for the replay with ‘Del Boy’ in the best fettle, physically and psychologically, of his six year pro career. With Team Chisora promising likewise, we might just be served a battle for the annuls.

Presumably you’ve known Tyson for his entire life. What qualities did you see in him as a youngster that suggested that he might be a successful prizefighter?

From the age of 13 or 14, working on the pads with his dad (former knuckle champion and ex pro Gypsy John Fury), you could see Tyson had a real natural gift for fighting. Even then, he had a good boxing brain plus he had good speed and lateral movement for such a big lad. He was naturally loose, not stiff like most young heavyweights.

To be honest, he boxed more like a lightweight. He was capable of throwing a heck of a lot of punches. And he always had a lot of confidence in himself.

A lot has been made of Dereck’s (lack of) conditioning but they were both in poor shape. Tyson only trained 14 days for that fight himself so, fitness wise, it was pretty much Even Stevens.

Tyson won because he had better attributes; his size and superior co-ordination, and it’ll be a repeat of that on July 26. He’s half a foot taller, has quicker hands and more skill. Tyson’s just the more talented fighter. Given all the advantages Tyson enters with, it really is his fight to lose.

Clearly Dereck will enter as a significantly lighter and fitter opponent on July 26. Will that present Tyson with different problems to last time?

Maybe. We’ve got our tactics sorted but we’ll play it by ear, see what unfolds. It’s a different fight altogether. Both athletes have come a long way over the last three years. This is going to be a helluva lot better quality fight than their first one.

In what ways, both technically and as an individual, have Tyson developed since there first fight?

Tyson’s developed in every way, as you’d expect of a rising young fighter over a three-year time period. He’s now a proper fighting man.

People credit him regarding his heart, for getting up when he’s dropped, but he has to get up because he’s so frustrated with himself for getting things wrong. That’s just the warrior inside of him.

Whilst Tyson had an awful lot of natural talent three years ago, he also had a lot of flaws that needed ironing out. Hopefully, we’ve now taken care of those. His footwork’s improved, his condition is much better and, particularly, he’s more mature mentally, more focussed.

Previously, he viewed boxing as a bit of a pastime. Before, he just wanted to see how far the boxing would take him. He’d fight until he first got defeated then he’d jack the sport in and sell cars. He’s since had a 360 degree turn around. He’s now of a mindset that boxing, and nothing but boxing, is his life for the next 10-15 years. He does nothing but study boxing. He’s totally focussed.

And in what ways has Dereck evolved as a fighter?

Dereck, too, has grown up and become far more seasoned. He’s had several very tough fights at the highest level. He might’ve come up short a few times, but only against the very top ones. You can’t help but improve from having those experiences.

He went back to the drawing board and he’s got himself right up there, winning the European title. He gets in your face, grinds you down and has learned to pace himself better. Right now, he’s as ready as he’ll ever be. On July 26, win or lose, you’ll be seeing the best Dereck Chisora there’s ever been.

While Tyson remains unbeaten and Chisora has lost four times, ‘Del Boy’ is the reigning European champion and is ranked above Tyson with all four major sanctioning bodies, largely because he’s fought a higher grade of opposition since the first spat. Does that irk with you?

Not remotely. Ratings mean very little. They’re just to do with the power of the promoters. Ratings, words, interviews all mean very little. When Tyson gets inside the ring I’m very confident that he’ll back up all that he says.

You’ve gone on record as saying that Tyson is presently in the best shape of his career. What will he be capable of doing against Chisora on Saturday week that we’ve not seen before?

There’s been a lot of changes and Tyson’s come through a very hard camp. This fight, you’ll see the best ever Tyson, see what he’s really all about. He’s still only 25 but I’d say he’s already 90 per cent of the finished article and he’s got a long career ahead of him.

We’ve had a perfect camp, no injuries, nothing has gone wrong and Tyson has looked fantastic in every aspect. Regardless of the result, there’ll certainly be no excuses from our end afterwards. The best man on the night will win the fight.

Given the erratic behaviour of both Dereck and Tyson in the past, as a coach I’m sure you’ll be happy when the final pressers and weigh-in are done and dusted and we can get on with the fight?

Well, above all it’s a business as well as a sport. This is a really big fight so these conferences and head-to-heads have to be done for the media to help drum up interest but it’s not ideal. Personally, it’s not a part of the game that I’m comfortable with or like to dwell on. It’s all bullshit and I’m not into it.

It’s the respect that I have for all fighters that makes me want to be involved in the game. I’m not a man for having arguments. I always train my fighters to do their talking inside the ring. I’d rather just have the fight.

What are you anticipating that Team Chisora will bring this time?

I’m expecting that Dereck will bring the fight, bobbing and weaving forward, trying to force Tyson to work, to open up. He’ll be looking to bury himself into Tyson’s chest. He’ll not have to look far!

Tyson could make the fight far easier for himself by standing off and boxing but you know how Tyson likes to entertain the fans, give them a show. I expect they’ll meet square in the centre of the ring and slug at one another until one falls to the floor!

How and why does Tyson win?

Look, we’re taking nothing for granted. This is heavyweight boxing. Anything can happen. Nothing is set in stone. This is certainly not an easy fight for Tyson to win. Dereck is a proven world class operator and his team know what they’re doing. Dereck’s a tough nut. This is no walk in the park.

But I’m picking Tyson by stoppage. Tyson’s naturally a much bigger man and needs to capitalise upon that. It’s a smaller man up against a giant who also happens to be a serious athlete.

In addition to size, Tyson has more God-given tools and, right now, he’s hitting with tremendous power. It won’t be a technical fight and I don’t think it’ll last long but there’ll be a lot of punches thrown. Though we’ve trained for 12 hard rounds, I don’t think it’ll go past eight.

Having beaten Chisora previously, how important is it that he wins spectacularly this time and sends out a message to the other leading heavyweights?

I think that’s very important. He’s been out for a while now so we need to get people talking about him again. If he comes through on Saturday week, in the style that I expect him to come through in, then he’ll be ready for the cream, ready to be unleashed against your Klitschkos, Stivernes, Wilders, all comers.

Come July 26, people will finally realise that Tyson is the future of heavyweight boxing.

Tickets and VIP packages are available through Eventim on 0844 249 1000 or eventim.co.uk