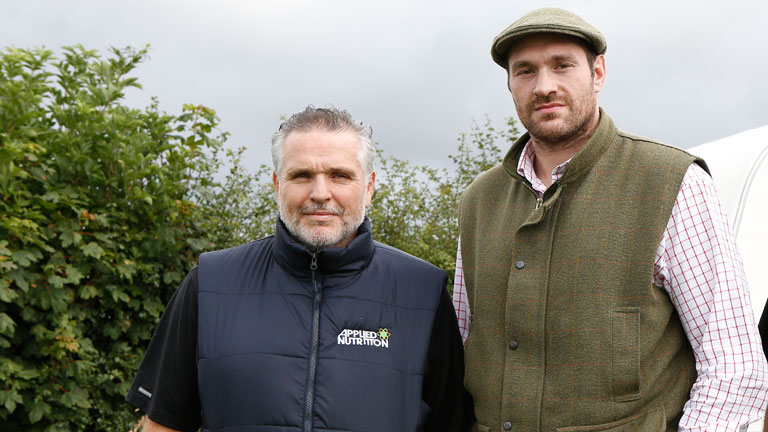 PETER FURY, uncle and trainer of former world heavyweight champion Tyson Fury, thinks his nephew can return to boxing once he’s recovered from the mental health issues he is currently struggling with.

Tyson recently vacated his WBA and WBO world titles and is seeking professional help to deal with his depression. His boxing licence has also been suspended pending further investigation into his admission of taking cocaine and he also faces allegations of doping (which he denies) from VADA after a failed test.

Peter, who also trains Tyson’s cousin Hughie Fury, confirmed that Tyson is receiving formal treatment though is not able to put a timeframe on his recovery.

“I don’t see much of him, I speak to his dad on a daily basis,” he told BoxNation.

“He’s doing alright, he’s with his wife and kids and as far as I know he’s receiving his treatment. I think he’s have some one to one stuff with psychiatrists.

“I think he’s improving as time goes on, it’s very hard to say but I imagine he should be OK in a couple of months.”

Last November Fury pulled off one of the finest performances by a British fighter in a foreign ring in history when he dethroned Wladimir Klitschko in Germany.

However he has not fought since and has been lambasted in the media for airing his controversial views on women and homosexuality.

“Winning that world championship was, for me, one of the best highlights of my life,” Peter recalled.

“To see a young man train so hard, be dedicated, put their whole life and trust into you and everything you’re telling them comes true – it was a dream come true. Post-fight, everything after, it’s not been good at all, we’ve not even had a chance to celebrate the world titles.

“It’s been a mess, to be honest. The only good part for me was winning the title and the next morning Tyson thanked me and we had a bit of a hug, the happiest times of my life. The rest of it is all bulls***. It’s just been about money, about this, about that, it’s just sickly, boring stuff.”

His comments led to a petition being set up urging the BBC to remove him from last year’s Sports Personality of the Year shortlist. The petition failed, though Tyson did not receive the accolade on the night.

Peter has frequently commented on what he calls a ‘witch hunt’ against his nephew and feels Tyson does not get the respect he deserves.

He said: “What I will say about this country, everybody goes on about free speech but we don’t have it, do we? You’ve got a young man openly talking about his beliefs and he gets shot to pieces. Tyson hasn’t got a bad bone in his body. A lot of people are happy to jump on his back about anything, but that also is self-created isn’t it? It’s a balance, it’s what you create yourself.

“He’s gone against a lot of advice, that makes him who he is, that’s what makes him intriguing to people. Ultimately, when he steps through that [gym] door I’m only interested in him doing what I want him to do, win world titles. If he wants to go home and shout from the rooftops and do whatever he wants, I don’t advise anymore because he doesn’t take it. He took advice as a young lad coming through the pro ranks, he hung onto every word and done everything right. He’s performed and done everything properly and he’s won that world title the hard way, not by cheating, he’s won it through blood, sweat and guts. Hours and hours in the gym, dedication personified.”

After his win over Klitschko, negotiations soon began to secure the contracted rematch. After drawn-out talks, it emerged the pair would meet in Manchester, though two dates were subsequently aborted after Tyson pulled out.

The first time was due to an ankle injury and the second was down to him being ‘medically unfit,’ though it was later confirmed he is suffering from depression.

Peter admits that Tyson has not had the hunger he had when moving through the ranks before he fought Klitschko.

“He’s not been motivated, a lack of interest was there. He’s got his own things to deal with, Tyson, so hopefully he comes round,” he said.

“The world’s at his feet, he’s turned down a lot, he’s turned down millions of pounds. His foot’s at the top of the mountain. Imagine you’re in the desert, you’ve been there for 10 days and you need water, you climb over a rock and there’s the water, someone offers you a cup and you turn it away. It’s one of those. To me, it’s not logical, what’s happened, which says to me there are underlying issues.

“He’s won the linear title and now he thinks ‘well what can I do to better that?’ There are all kinds of emotions running through his mind.”