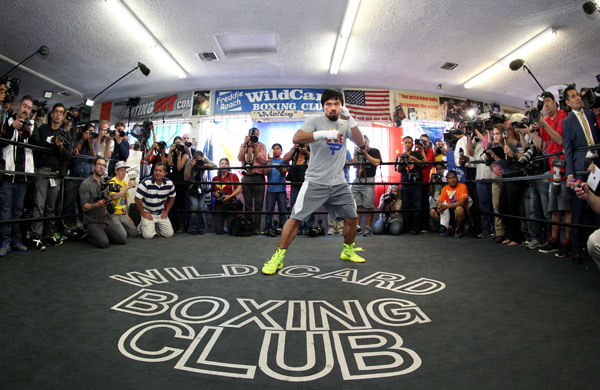 But would defeat to Mayweather define Pacquiao, wonders John Dennen

AHEAD of their mega-fight, Floyd Mayweather warned Manny Pacquiao that he would take advantage of the Filipino’s “reckless” approach (click here to read the article). Pacquiao however insisted, “The reason I am so loved by fans is because of my reckless style of fighting. People like exciting fights with actual punches being thrown.”

Mayweather however, an imperious defensive master, unbeaten in 47 fights, is a hard proposition to prepare for. But “Pacman” believes he is ready. “I have a lot of sparring partners that are similar to Floyd’s fighting style, we have done well. We know what to expect,” he said. “I have watched tape on Floyd to make sure that our strategy and technique in training camp is correct.”

Pacquiao had a warning of his own. “Style wise, I am the same fighter I was five years ago. My determination, inspiration and killer instinct is the exact same as it was five or six years ago,” he said. Only the fight is bigger now than it would have been in 2010. “More people are interested and informed about this fight now than they would’ve been five years ago,” he added.

He couldn’t deny that “beating Floyd would be the biggest victory of my career”, though he suggests that defeat wouldn’t define him. “My entire career defines my legacy,” he argued, “I have already accomplished great achievements in my career while excelling in different weight divisions. This fight is an additional achievement in my career; it’s the biggest fight in boxing history.

“For me, boxing is my passion. I enjoy boxing and giving honor to my country of the Philippines. My concern is to bring an exciting fight to my fans. My first concern going into every fight is how will I be able to entertain my fans, give them enjoyment and make them happy.

“I feel very excited for the fight.”