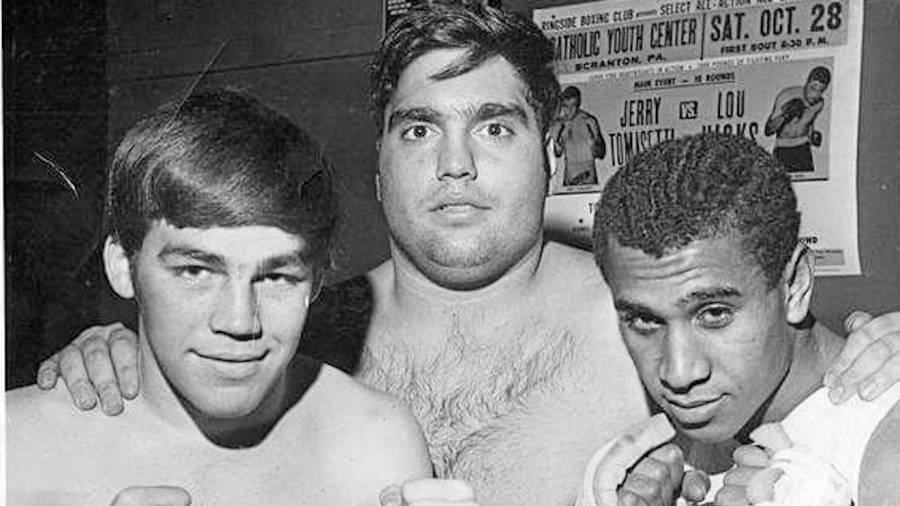 PAUL SIMONETTI answers the phone with a degree of suspicion. In this day of robocalls that attitude is to be expected. But his demeanor quickly changes when he realises why he is being contacted. The flood of wonderful memories start to come back to Simonetti, now 71, as he gushes over the details of the most exciting night of his life.

Simonetti [pictured above centre] was a small heavyweight from Pennsylvania, who only had one amateur contest before turning professional. As a pro he compiled a mediocre 11-12-2 (5) record. Of his dozen defeats, seven were inside the distance. Yet he holds a distinction that so few can claim, having shared a ring with Muhammad Ali and Joe Frazier on the same evening of their “Fight of the Century” at Madison Square Garden. It was the highlight of Simonetti’s career and one he is darn proud of.

Simonetti’s four-round contest against John Clohessy was the second of the five undercard matches that historic night, but he was no stranger to boxing at MSG, having fought there just a few months previously on an undercard featuring George Foreman’s second round stoppage of Boone Kirkman. Simonetti won a four-round decision over another club fighter, Brian O’Melia who had stopped him in four earlier that year. It was Simonetti’s sixth victory in eight fights. In his next one he would not make history but become a part of it.

Everyone who was around and old enough to view the “Fight of the Century” has a story of where they were that night, but few are as compelling as Simonetti’s. There are many boxers who have had greater careers than Simonetti, but only a select few have been fortunate enough to perform on a stage as big as he did that March 8, 1971 evening. Simonetti won his fight, but that was nearly an afterthought to him when he talked about the night.

At that time the weigh-ins took place on the day of the fight. Ali and Frazier weighed in separately to avoid an altercation, but the undercard fighters were all together waiting to get on the scales.

“What I most remember about the weigh-in was a heavyweight named Roosevelt Eddie having a run-in with Ali’s brother, Rahaman,” recalled Simonetti. “Maybe because he needed to be with his brother they had him cut the line and weigh-in ahead of the rest of us. Eddie started screaming at Rahaman because he felt he was getting preferential treatment. He told Rahaman if he didn’t like what he was saying he could tell his brother. Eddie was scheduled to box Ken Norton in the walk out bout that night but it never came off. I never spoke to Norton, but we made eye contact and nodded to the other as a sign of respect. Little did I know that one day he would be world heavyweight champ.

“’Two-Ton’ Tony Galento was heavily involved in my career at the time. He had a hard time climbing the ring steps to be directly in my corner, but would sit ringside and give me advice from there. I don’t know whether he was showing off or trying to give me added confidence, but he took me to Jack Dempsey’s restaurant on Broadway on the way to the Garden. I was introduced to Dempsey, ‘The Toy Bulldog’ Mickey Walker, and would later meet Jake LaMotta. Everyone was nice, polite, but the champ who impressed me the most was ‘The Cinderella Man’ Jimmy Braddock. He was a down to earth guy who had all the time for me I needed.”

You can find the result of Simonetti’s bout with Clohessy on BoxRec, but beyond that there are no other details of his four-round unanimous decision victory. I attended the fight and purchased an unofficial fight program outside MSG from eccentric newsletter publisher Malcolm “Flash” Gordon. The memorabilia craze had not been fully born yet. Naive to such things I wrote the results of the undercard matches in there. Referring to it all these years later it said Simonetti won it by two scores of 3-1, and another 2-1-1. A relatively close match, then, but one that Simonetti claims he dominated.

With Ali and Frazier on tap the undercard fights were designed to pass the time before the big one, but on reflection Clohessy-Simonetti was a quality matchup. The blond-haired Clohessy was a New York Golden Glove champion who was undefeated in five fights (three inside). A sanitation worker by day he had built a bit of a following in the New York area.

“It was a good fight for me,” says Simonetti. “Clohessy had the perfect style for me. I got inside easily and landed body shots. That might have surprised people because I was a little paunchy and John looked like an Adonis. It was a good fight and we both came out of it okay.”

Simonetti rushed back to his dressing room after the fight, showered, changed, and went back into the arena as excited to see the big fight as everyone. The only problem was that he had no ticket to the show and conceivably could have been forced to leave had security stopped him. “Yeah that could have happened,” he said, “but I was only 21 and didn’t think of such things. I couldn’t wait to see the main event. I stood in the corridor behind ringside and watched from there. My style resembled Frazier’s and I thought he clearly won the fight. There was electricity in the building the whole night, a humming sound which never seemed to stop. Magical is the only word I can use to describe it.”

Simonetti was in for more thrills when the fight ended. He saw one of his heroes, Joe Louis. “I went over to say hello and he was very nice. I said, ‘Joe, you would have beaten them both.’ He smiled, then told me not to say that because Ali and Frazier were great fighters. I also bumped into [football great] Jim Brown.”

Simonetti would never box at MSG again, spending the rest of his career in obscurity. There were fights in Italy and South Africa, but there as with everywhere else, the losses piled up.

“I never dedicated myself to boxing,” he admits. The biggest name on his record was future world title challenger Lorenzo Zanon who outpointed him over six rounds.

“I was supposed to box Duane Bobick, but he pulled out. There was also talk of me fighting Larry Holmes in Scranton, early in his career. We know how that would have probably turned out,” chuckles Simonetti. He retired after losing a four-round decision to Joe Hathaway in Scranton in November, 1974. In Simonetti’s post-fighting days he worked in construction and as a restaurant chef.

In the half century since, Simonetti has been no more than a footnote in the tale of The Fight of the Century. According to him no reporters have called to get his story, but he doesn’t really care.

“It was the signature moment of my career,” he says proudly. “It didn’t sink in until the fight was over that I was a part of history.”