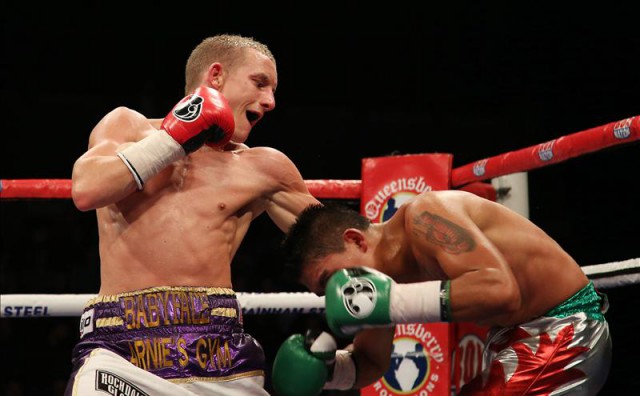 PAUL BUTLER is determined to carve out a piece of history when he fights Zolani Tete on March 6. If he defeats the IBF super-flyweight champion Butler will become the first Briton in 104 years to win a second world title in a lighter weight division.

Paul has had to wait longer for this fight than expected after Tete broke his hand and couldn’t make the original date in October. That postponement has only fueled Butler’s determination. “I can’t wait to get in there now. It seems like one big, long camp. Obviously I boxed but my mind was still set on Tete then [in October]. As it’s getting closer and closer, I can’t wait to set eyes on him for the first time. I’ve got so much frustration but [I need to] not to let it out in such a wild way that I go in all guns blazing. It’ll be some controlled pressure. I can’t wait to get in there now. It’s been a long, long camp just to finally get my hands on Zolani Tete.”

He has been diligently preparing for the South African’s style. “I’ve had a lot more sparring for that than normal, because of the southpaw stance and how tall he is. We’ve had a lot more sparring. When I first got matched with him and I was sparring southpaws it looked a bit awkward as I was trying to deal with them. Because I’ve got more and more of them [for sparring] it’s basically just like I’m boxing an orthodox. I just get in the ring and it all comes naturally, slipping to the left and throwing the backhand, it’s like an orthodox to me now,” Paul said. “It’s natural to me now.”

“As an amateur I boxed so many southpaws,” he continued. “I hadn’t boxed one for four years because I’ve been a pro and I haven’t boxed one. So it was just getting used to the southpaw stance again and getting my foot on the outside and manoeuvring them into the ways that I wanted to move them and not letting them settle. Hopefully we’re putting all that into practice now and hopefully it works.”