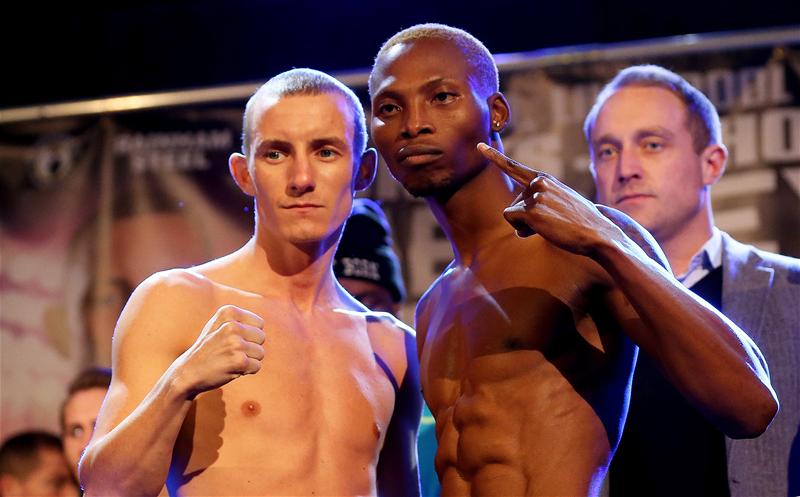 After linking up with trainer Joe Gallagher, Paul Butler tells John Dennen how he will reclaim a world title

How’s it all going at Joe Gallagher’s gym?

It’s going well. Training’s hard, harder than I’ve ever done before. I’ve done swimming or track after my first session in the morning. I wasn’t a great swimmer anyway.

Because it’s a big gym full of big characters some times when you’re training it doesn’t even feel like you’re training because you’re having a laugh as well. But there’s a limit. Joe won’t let you overstep that mark.

There’s always good sparring sessions going off in there, you’re always learning. There’s not just Joe giving me advice, there’s Stephen Smith, there’s Scott Quigg, there’s Anthony Crolla, all sitting there watching you because they’re about to spar next or their waiting to train.

I’ve watch the Stuart Hall fight since I’ve joined Joe and there are things I was doing, just habits, like throwing the right hand and overextending because the shots not quite there but I’m trying to lean for it and my chin’s coming up in the air and world class opposition will come over the top with a left hook or wait for me to extend. It’s just about setting traps really so we’ve been fine tuning little things like that.

You were on the cancelled Cardiff show, but you’re still boxing on October 22 (against Alexis Ruiz, televised on BoxNation).

Yeah, in Bolton. All the lads had booked hotels trains, I hate stuff like that, letting the lads down. There’s quite a few [supporters] that had booked trains hotels… There’s a few missed out not being able to get their money back and I hate all that.

It costs your fans, it costs them money so I wasn’t too pleased about it but at least I’m out on the same night.

Do you feel a bit like people are forgetting you were a world champion?

You know what I do. Actually coming back for this fight I feel like I’ve been coming back after a loss because I’ve been out for that long. I just want to get back in the ring.

I’ve got itchy knuckles, I want to get back in that ring, it’s doing my head in. I’ve boxed once this year. Once. I’m a former world champion. It was my fault on the eliminator where I couldn’t make weight.

I was on the Tyson Fury bill in the summer, that got cancelled, so I asked to go on the Cardiff bill [in July], they said it was too packed.

It’s been frustrating for me.

What’s the plan for getting back to a world title?

There was talk of getting straight back in, there was talk of Jamie McDonnell. But he had to go and box Rau’shee Warren, but that’s not happening now, I don’t know why. I don’t think Warren will leave the States. So they’ve gone with someone else in Monte Carlo. Then there was talk of the WBO champion straight away this year, Marlon Tapales… I fancied that fight but that just fizzled out and didn’t happen. There’s a little bit of talk on Haskins at the moment for next year.

What do you think of Lee Haskins?

You’d want to box him in a phonebox wouldn’t you? I thought against Stuey Hall, on the night I had it a draw, I couldn’t really split them. I watched it again and I thought he doesn’t deserve to keep hold of his title. The first four or five rounds he was tricky, [Hall] couldn’t really pin him down. Stuart Hall didn’t really work enough, the story of his losses really. He never gets going till rounds five or six. I thought if Stuey Hall started hitting the body, straight right hands through the middle and when he got close letting left hooks go and driving the right uppercut into the pit, I thought he could have got rid of him. But he headhunted with the straight right hand down the middle. I thought Lee Haskins gassed big time. For a world champion at that level you can’t be gassing. Especially on such a big stage like that, on the Golovkin-Brook card. He must have trained hard for that because you want to perform on cards like that and he just gassed, he gassed after six seven rounds and it was all Stuart Hall then.

So would you be confident you could beat Haskins?

I would. Obviously the first few rounds he’s dangerous and he’s tricky. Because of his style really. I don’t think he knows where he’s throwing his shots from himself really.

Then exactly what Stuart Hall done, just take over the fight, he bullied the fight out of Haskins in the end. I think Haskins was glad to hear the final bell.

Do you think a fight with Jamie McDonnell could happen?

That is the fight I’d take straightaway. There was talk of it when I beat Stuart Hall and then obviously I went down to super-fly. But if I was to box any of the world champions it would be Jamie McDonnell. He’s beat some good names. He’s Britain’s best bantamweight with a world title at the moment. If I was to pick any of them I would pick Jamie McDonnell.