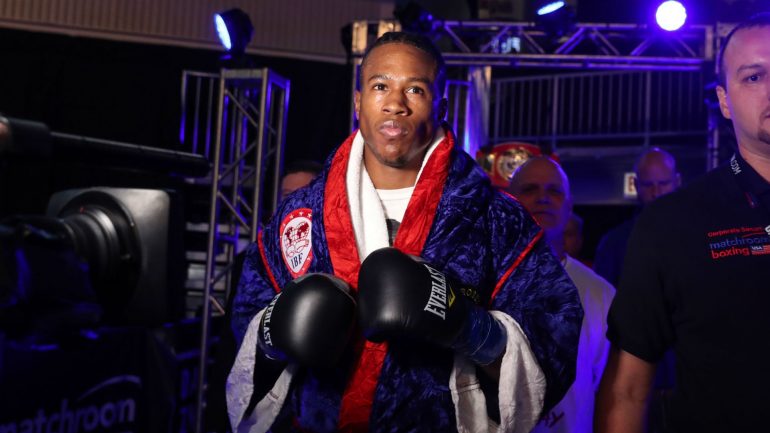 Patrick Day has died at the age of 27, four days after being knocked out in the 10th round of a super-welterweight bout in Chicago.

Following the loss to Charles Conwell, at the Wintrust Arena on the undercard of the heavyweight bout between Oleksandr Usyk and Chazz Witherspoon, Day was taken to Northwestern Memorial Hospital.

Day was dropped twice during the fateful bout before a left hook knocked him out in the final round.

His promoter, Lou DiBella, confirmed that Day had died on Wednesday.

“He was surrounded by his family, close friends and members of his boxing team, including his mentor, friend and trainer Joe Higgins… we are grateful for the prayers, expressions of support and outpouring of love for Pat that have been so obvious since his injury.”

Conwell, Day’s 21-year-old opponent, has been badly affected by the tragedy.

Day was a well-educated young man and exceptionally popular both inside and outside the boxing community. Though his good upbringing and happily family life meant that boxing was far from a necessity, Patrick chose to box for the love of the sport and the competition.

According to his trainer Joe Higgins, also a neighbour of the Day family, Patrick found other sports “awkward” yet was soon hitting a bag in Higgins’ garage.

At amateur level he won two national titles, the New York Golden Gloves (where he won the Sugar Ray Robinson trophy as the outstanding boxer of the tournament) and was an alternate for Errol Spence Jr on the Olympic team in 2012.

The fighter, from Freeport in Long Island, made good progress as a professional, winning his first 10 bouts, and as recently as June this year – prior to losing a 10-round decision to the heavy-handed Carlos Adames – he was rated in the world top 10 by two major sanctioning bodies. He had also been out to Japan, where he sparred Ryota Murata.

“He was smart, educated, had good values and had other avenues available to him to earn a living,” DiBella said about Day. “He chose to box, knowing the inherent risks that every fighter faces when he or she walks into a boxing ring. Boxing is what Pat loved to do. It’s how he inspired people and it’s something that made him feel alive.”

Matchroom’s Eddie Hearn, the show’s promoter, added on social media: “Devastated to hear the news of the passing of Patrick Day. I met him for the first time last Thursday, what a charming young man with a dream and a smile that lit up the room.”

Here in the UK, for example, some newspapers reported on Patrick Day falling into a coma but failed to mention that Josh Warrington – a world champion from Leeds who embodies everything that is good about the sport – made a triumphant defence of his title in his hometown on the same night.

Such reporting is understandable to an extent when one considers that Day’s death is the fourth as direct consequence of boxing this year. Boris Stanchov, Hugo Santillan and Maxim Dadashev died before him, each within the last four months. It’s a grim statistic.

For a sport that walks a perpetual tightrope due to its brutal nature, its imperative that steps are taken to investigate this latest tragedy.

DiBella, a tremendous ambassador for boxing, will ensure such steps are taken. For now, he rightly urges the media to let the memory of Day settle. Behind the scenes, though, DiBella will be striving to make the sport a better place.

“It becomes very difficult to explain away or justify the dangers at times like this,” the promoter said. “This is not a time where edicts or pronouncements are readily available. It is, however, a time for a call to action. While we don’t have the answers, we certainly know many of the questions, have the means to answer them, and have the opportunity to respond responsibly and accordingly and make boxing safer for all who participate.

“This is a way we can honour the legacy of Pat Day. Many people live much longer than Patrick’s 27 years, wondering if they made a difference or positively affected their world. This was not the case for Patrick Day when he left us.

“Rest in peace and power, Pat, with the angels.”