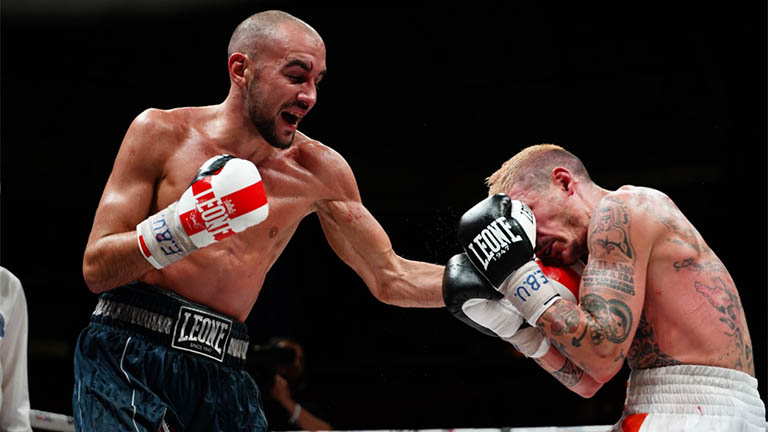 Valentino and Dixon both robbed of deserved victories against Patera and Prodan, writes Vittorio Parisi from ringside

SAD to say but two of the three main fights of the Allianz Cloud Arena, on a show presented by Matchroom and OPI Since 82, were marred by awful decisions.

Italy’s former amateur star Domenico Valentino, a 35 year old from Marcianise who won the AIBA World Amateur gold in 2009, was on the wrong side of a very bad decision rendered in favour of the Belgium’s European lightweight champion Francesco Patera, 26 and from Genk but of Italian heritage.

Underdog Valentino dominated the first half of the fight, simply making a half-step back and countering with the straight right – he timed Patera every time.

Both fighters were cut over their right eyebrow as the result of a head clash in round three. The Belgian missed the target many times and only in the second half of the fight did he find a better rhythm – thanks also to the fact that Valentino slowed down a little bit.

Fighting a pure excellent boxer with limited power, Patera did not impress like he did against Paul Hyland Jr last June in the same venue when he scored a stoppage. But the Belgian somehow started to target his foe, working the body, but he surely did not level matters on the unofficial scores of ringsiders.

Valentino in the last few rounds fought In spurts, forcing also Patera on the ropes. But the Belgian was able to counter effectively and in the last round a perfectly timed left hook to the jaw found Valentino open, flooring him. The challenger was not really hurt and regrouped very well, ending the fight on the front foot and pushing Patera back.

Valentino, despite being the Italian fighter, was in the guest corner probably because Patera has a link with the promoters since his win over Lewis Ritson last year. In other words Valentino looked like the visitor, scoring included.

The same destiny happened to Welsh visitor Tony Dixon, 27 and from Merthyr Tydfil, who lost a very debatable split 10-round decision to Romanian welterweight Maxim Prodan, 26,  born in Ukraine but living in Milan where he has built his fighting career followed by a big group of raucous supporters.

Dixon started by dancing in the ring and pumping out a good left jab. Prodan, who needs to have a static foe in front of him, ate that jab throughout, not finding a solution and insisting only on hooks to the body easily blocked by the Welshman, who used very good lateral and body movements.

The Romanian likes to fight in a phone booth, pressing his rival, and in this fight was out of his element.  He tried to work the body to make Dixon trade punches, with no results.

Prodan had some good moments in the last rounds but Dixon was very often able to counter, answering with flurries even though they had with limited power.

Judge Enrico Terlizzi, Italy, had Dixon ahead 96-94 but was overruled by judges Francesco Rega, Italy, with 97-93 and Ammar Sakraoui, France, who had it 98-92! Referee was Grzegorz Molenda.

Super-middleweight Daniele Scardina, 27, from Rozzano in the Milan suburbs but living in Miami, Florida, won a comfortable decision over Belgian Ilias Achergui,  26-year-old from Tournai.

The 10-rounder was almost stopped in the second when heavy hitter Scardina stunned Achergui with a right hook to the jaw and floored him with a double left hook.

Achergui bravely regrouped thanks also to a problem Scardina had with his right hand from the third round on. The Belgian fought mostly on the front foot, trying to open the Scardina’s guard but the Italian fighter never lost his composure.

The Belgian tried until the end, deserving the applause of the crowd.  Judge Enrico Licini, Italy, scored 97-92, while judges Grzegorz Molenda and Francesco Rega had it 98-91.

The Verdict Valentino and Dixon can count themselves very unlucky.