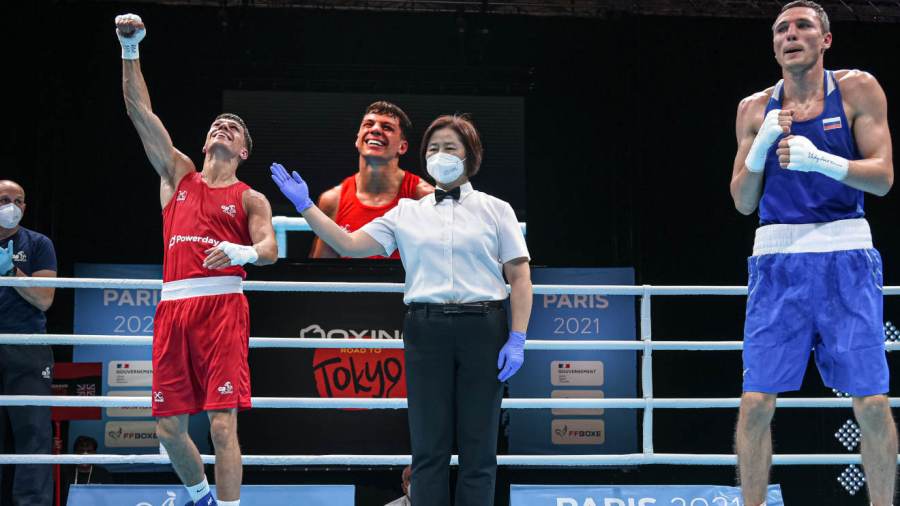 WITH 11 British boxers having secured their place at the Tokyo Olympics, GB had a strong showing on the last day of the European qualification event with seven boxers reaching finals at the Le Grand Dôme in Villebon-sur-Yvette on the outskirts of Paris, France on Tuesday (June 8).

Wales’ Price had to contend with a towering Zenfira Magomedalieva in the middleweight final. The Russian is the reigning light-heavyweight World champion and somehow brought her frame down to 75kgs, the division where Price in turn is the World gold medallist. Lauren was once a welterweight herself and so the size difference between the two was pronounced. Magomedalieva tried to make full use of that physical advantage. She charged after Price with real ferocity, especially in the first round. But Price relied on her speed, her movement and composure under pressure to weave away from those attacks and pick off Magomedalieva with shots to the head. Price won an assured unanimous decision.

“I knew she was going to be strong, stronger than the others I’ve fought this week. So it was just about keeping my shape, and same tactics really, about speed,” Price said. “Because I’m quite short, most people think that I’ve got to slip and box my way in. But I’m quite the opposite, I wait to counter.

“I felt a little bit tired in there today, but it’s expected, obviously four fights in five days. The main aim was to qualify, and I’ve topped it off by winning gold, so over the moon.”

Price advanced to the final after beating Aoife O’Rourke. The Irish middleweight had impressed in this competition but couldn’t deny Price a unanimous decision win.

Another epic Britain vs Russia final saw Pat McCormack get revenge over Andrei Zamkovoi, who beat him in the final of the 2019 World championships. The Russian is a superb southpaw, an excellent Olympian all the way back at London 2012. But McCormack was even better, padding down Zamkovoi’s jabs and launching his cross with wicked speed. He drifted in and out more easily, finishing combinations with solid left hooks. But Zamkovoi was always dangerous, lining up heavy lefts, fast enough himself to catch McCormack. As well as their aggression both boxers remained intensely focused, thinking throughout and adapting to each other. In the third round McCormack showed his determination as he slammed his own gloves together, bellowing as he delivered a big finish and a unanimous decision win, the most significant victory of his career so far.

“I’m feeling great, European champion going to go to the Olympics, probably with the number one seed. I’ve just beaten the World champion, who beat me in the final of the Worlds and cut me in Russia as well, so it’s been on my mind a lot. I got the win, and put it on him at the end and made sure. I’m just over the moon,” said Pat, who unanimously outpointed Ireland’s Aidan Walsh to reach the final. “I heard my brother shout, ‘Make sure, how much do you want it?’ And then I just felt a fire inside me and a release of energy, and I just let it out, roaring like a lion.”

Pat’s twin brother Luke McCormack came away from the 63kgs semi-final the previous day (June 7) with the bronze medal, but only after an excellent, close contest with France’s Olympic silver medallist Sofiane Oumiha. The two are evenly matched and both opened up with well-judged aggression. Luke worked his shots through with style, jolting Oumiha with solid lead lefts. But the Frenchman’s connections from longer range saw him edge a split decision.

Ireland’s Kellie Harrington showed her experience and her strength just to tame young Londoner Caroline Dubois in the 60kgs final, dictating the action enough through each round to record a split decision win. Both will be contenders by the time the Tokyo Olympics come round. In the semi-finals Dubois had taken another seasoned international scalp when she unanimously outpointed Sweden’s Agnes Alexiusson. Harrington had beaten Turkey’s Esra Yildiz unanimously on the other side of the draw.

GB had five silver medallists overall. Ben Whittaker’s semi-final with Croatia’s Luka Plantic grew increasingly wild. He won a deserved split decision but was withdrawn from his final. Charley Davison confirmed that she belonged at the top level with a unanimous victory over Italy’s Giordana Sorrentino in the 51kgs semi-final but Turkey’s Buze Cakiroglu, the top seed in France, took the final on a 4-1 split decision.

In the men’s flyweight final Galal Yafai engaged France’s Billal Bennama in a furious war, clipping him with his southpaw hooks. But Bennama stood his ground and banged hard crosses into Yafai’s chin as they both tore into each other with gusto. The Frenchman was ahead on the cards but head clashes saw Bennama receive two cuts round his left eye, so bad he had to be stopped early in the third round. These looked purely accidental but harshly the referee disqualified Yafai. At the other end of the weight spectrum super-heavy Frazer Clarke also lost to the Frenchman in the final, Mourad Aliev taking a split decision. It was a measure of vengeance for Aliev, whom Clarke has beaten in the World championships and the recent Bocskai.

Ireland’s Michaela Walsh was forced to settle for the silver medal in the 57kgs final, Italy’s Irma Testa outpointing her on a unanimous decision.

Watch highlights from the European Olympic qualifier at 11.30am on Sunday on BBC Two.