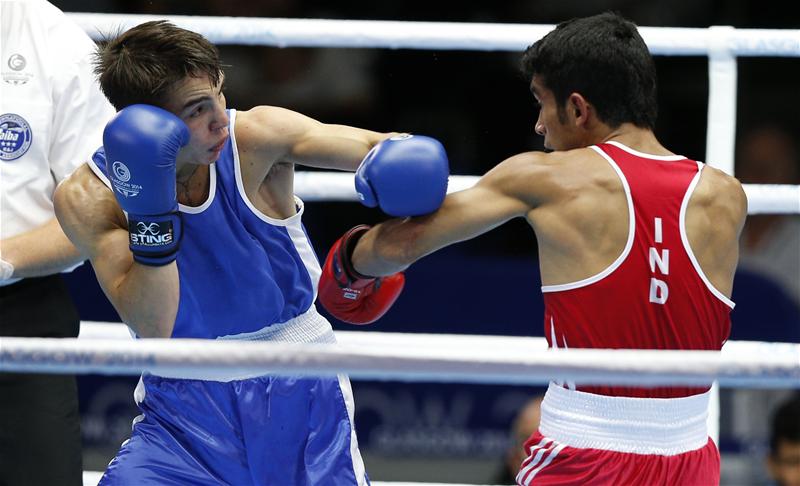 But qualification standards for this tournament do need to be addressed, writes John Dennen

OLYMPIC medallists Paddy Barnes and Michael Conlan were expected to reach the later stages of the Commonwealth Games and they are now assured of a podium finish. But the rest of the Northern Ireland team has followed their lead magnificently, guaranteeing themselves an astonishing nine medals out 11 athletes. That’s a lot of medals. England for example have got seven, in itself a pretty healthy return. The semi-finals tomorrow (August 1) and finals on Friday (August 2) will determine whether those medals become gold, silver or bronze (the losers of the semi-finals all get bronze medals).

Barnes said, “I think it’s because we have so much self-belief. We fear nobody.”

Conlan took up the theme. “It’s bred into you. We’re always fighting as kids. The team at the minute is pretty inexperienced but they’re all hungry. They’re out for medals,” Michael said. “The work we’ve put in has been top notch.”

Conlan dealt with the 56kgs representatives of Nauru and Uganda easily enough (although he picked up a cut against the former in his first bout). He did however have a tough contest with India’s Shiva Thapa on his hands.

“It was always going to be quite a tough fight, world number two against world number three. I was quite nervous,” said Conlan. “He came with different kind of tactics to what I thought he was going to come with… He tried to come in and roughhouse, which doesn’t probably work for him. Works more for me I think, but he was quite dirty.

“I knew I was getting to him. I knew it was annoying him. When he started using his head I knew he was going to get warned because he was using it like mad.

“He was really dirty to me so I had to be really dirty back to him. That’s just part of the game, that’s just the way it is. If you’re not first, you’re last.”

He has hard bouts ahead of him too, Sean McGoldrick in Friday’s semi-final and the winner of Qais Ashaq and Kenya’s Benson Njangiru in the final. Paddy Barnes in contrast was far too much for his first two opponents at these Games, battering and stopping Charles Keamu from Papua New Guinea and Hamadi Furahisa from Tanzania.

Paddy said, “It’s harder to win the Irish championships than the Commonwealth Games, except you have the likes of England, Scotland and Wales, and the likes of India who are very strong too.”

Not that he’s worried about the disparity. “I enjoy beating up people,” he said with a smile.

But in some other cases the gulf in class has been too much. That is a worrying issue at these Games. No club coach would put a boxer into a potential mismatch. Yet a competitor could enter Glasgow 2014 when she had never had a bout before. Not one. I appreciate it’s an endearing story that Taoriba Biniati has come all the way from Kiribati to have her first amateur boxing contest. Before she came to Glasgow she had never been in a ring before, training under a breadfruit tree on her island. She had only sparred men before, and they didn’t like hitting her.

We all enjoy the story of an unlikely underdog but, sorry to be a killjoy, this is boxing and you have to get real. People get punched in the head and that’s exactly what Isabelle Ratna did to her, a lot, until the lightweight from Mauritius exhausted herself after a couple of rounds. Biniati made the final bell but it was not an edifying spectacle.

“We were a bit fortunate with the draw, but the girl from Mauritius was a bit of a novice as well and I would have been concerned if she had been fighting someone like [Natasha] Jonas from England,” said Kiribati team manager Derek Andrewartha.

As well we all should, Jonas is a highly experienced international, who can punch too. But if they had been drawn together, the bout would have gone ahead. Andrewartha said, “I probably would have been very close to the ring with a towel.”

That sounds potentially disastrous. There needs to be a basic qualification standard for this tournament. (Surely if someone’s had less than 10 bouts they’re too inexperienced.) Biniati was the best female boxer on Kiribati, by virtue of being the only one. That meant they could put her into the Games. AIBA, the world governing, body sets the qualification standard for the tournament and the Commonwealth Games can increase it. The boxing tournament this year has reached its final stages with no crises, there are some top quality boxers left in the competition and some great bouts to come. But in future that potential for terrible mismatches needs to be eliminated.

To read the action report from the preliminary stages of the Commonwealth Games don’t miss this week’s issue of Boxing News. Available on iTunes, Google Play and in shops.