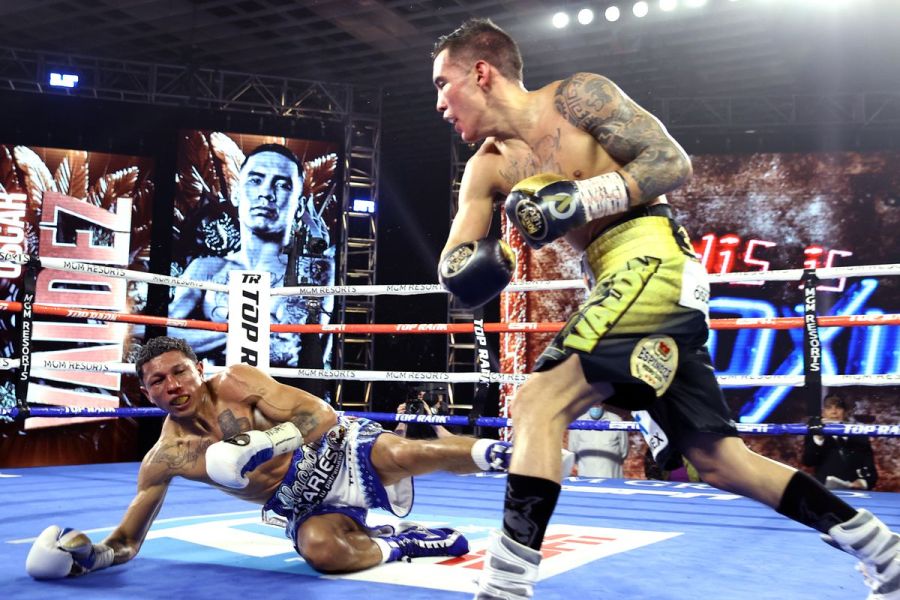 AFTER four rounds of an all-Mexican super-featherweight title fight, Miguel Berchelt, the champion, seemed to have lost his chin… that’s because it was on the canvas somewhere, splintered into a hundred glass shards. His legs were still beneath him, although they were reduced to a mere decorative function. Berchelt was in that airless purgatory known by distressed boxers as Queer Street, about to land head first, prone into a rainwater-filled gutter. The challenger Oscar Valdez had just curb-stomped him for the better part of three minutes.

Somehow the 29-year-old Berchelt managed to regain his senses, replaced glass with a chin made of brass, and, what’s more, put on an offensive rush during the sixth and seventh rounds that had Valdez, 30, retreating along the ropes, his head bobbing furiously like an ocean buoy during a storm. Berchelt was coming on, a Mack truck on a downward slope.

Yet the momentum would shift again, and this time Berchelt would have no stopgap solution at hand. With a few seconds remaining in the 10th round (set for 12), Valdez ducked a pair of punches before answering back with a whistling left hook that cleared away the last bits of rubble from his adversary’s mangled chin. It had all the percussive force to leave a shell crater in the middle of the ring. Berchelt was out. He pitched forward and and fell on his face in lurid slow motion, thus completing the motion that he had been flirting with for seven ungodly rounds. As if anything could be more superfluous, referee Russell Mora waved off the carnage with one second left in the round. Valdez howled with joy as he lapped around the ring inside the MGM Grand. The only thing that was missing on this night, alas, was a flesh-and-bone crowd.

Valdez, a former featherweight titleholder who vacated his title in that weight class to compete at 130 pounds, was thought to be too small, too fragile to stand up to the two-fisted onslaught of the bigger and badder Berchelt who, with seven successful title defences under his belt, had been chopping down opponents recently like firewood. From the Las Vegas oddsmakers to Mexican great Julio Cesar Chavez, the majority of observers predicted a late Berchelt TKO.  “There’s nothing better in life than proving people wrong,” Valdez said postfight, who scored knockdowns in rounds four, nine, and 10. “I have a list of people who doubted me. My idols doubted me. Boxing analysts doubted me. They said Berchelt was going to KO me. I have a message to everybody: Don’t let anyone tell you what you can and can’t do.”

The doubt was justified given that Valdez, who resides and trains in the vicinity of Los Angeles, recently appeared to be at a stylistic crossroads as of late, trying, on the one hand, to maintain his inborn propensity for brawling – those same instincts that once left him battling with an unhinged jaw against Scott Quigg in 2018 – while, on the other, implementing the somewhat more alien defensive and counterpunching sensibilities drilled into him by his ascendant coach Eddy Reynoso, the same man who rears the likes of Canelo Alvarez and Ryan Garcia.

It all came together beautifully for Valdez on this night, however. There was no hemming and hawing in the ring. The offense flowed into defense. The heart listened to the brain. He fought a complete fight.

In the early rounds, Valdez started cautiously, but smartly, using his quickness to score ramrod left jabs. By the second, Valdez had drawn blood from Berchelt’s nostrils. Just as it seemed as though Berchelt was gaining control in the middle rounds, Valdez showed timely poise – and creativity. On more than one occasion, he switched to southpaw – a new wrinkle – and landed head-snapping blows.

After the fight, Valdez, having just put out a massive conflagration, stoked the flames for his first title defence.

“I want to take this belt home, and I’m happy for that,” he roared. “Any champion out there… I heard [130-pound contender] Shakur Stevenson wants to fight. Let’s do it. I just want to keep on fighting and give the fans what they want.”

On the Top Rank undercard, 20-year-old rising prospect Gabriel Flores Jnr of Stockton, California looked to be in for a long and challenging night against Jayson Velez of Puerto Rico, but he made it a surprisingly early night by stopping the solid veteran with two knockdowns in the sixth round, the second of which compelled referee Ton Weeks to halt the fight at 1-47. It is certainly the most significant win on Flores’ budding ledger. Velez, who is no world beater, was coming off a spirited effort in his last fight against Oscar Valdez last July, before succumbing to a stoppage in the ninth round.

Flores scored the first knockdown with a left hook that landed directly on the temple, sending Velez noodle-legged to the canvas. Flores then pounced on Velez with a slew of combinations to score the second knockdown.

In a dreary all-southpaw battle, undefeated middleweight contender and 2012 Olympic silver medalist for Brazil Esquiva Falcao battered Russian gatekeeper Artur Akavov so badly that he was seeing double vision by the conclusion of the fourth round, at which point Akavov’s corner told referee Mike Ortega that they were throwing in the towel.