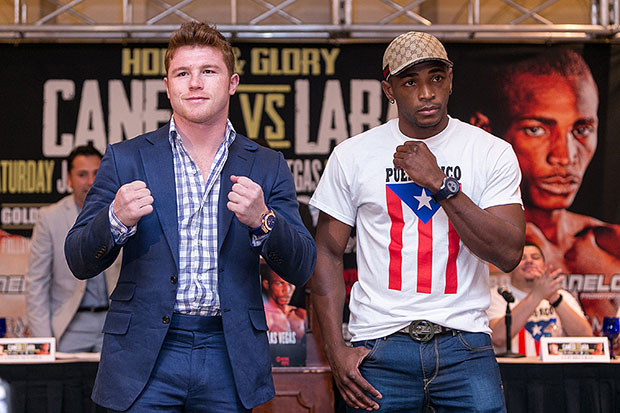 OSCAR DE LA HOYA has labelled this weekend’s clash between Mexican superstar Canelo Alvarez and Erislandy Lara as a battle for ‘honour and glory’.

The boxing legend, and boss at Golden Boy Promotions, will see his premier charge Alvarez take on one of his toughest fights to date when he steps in against the slick Lara at the MGM Grand in Las Vegas, live this Saturday night on BoxNation.

The Hall of Famer is well aware of the challenge that faces Alvarez, and despite no title being up for grabs between two of the world’s leading light-middleweights, it was a fight both men wanted as they look to establish their legacy in the sport.

“This fight is not about a title. This fight is about honour and glory,” said De La Hoya. “When people say I didn’t want this fight for Canelo, obviously it wasn’t the first choice. As a promoter you don’t want the most difficult fight out there for him.

“But this is what Canelo’s all about, ultimately it’s his decision, and his decision is a very calculated decision. He’s confident in his abilities, and he wants to fight the very best. That’s the bottom line,” he said.

Though this is anticipated as the 23-year-old Alvarez’s hardest fight since his loss to Floyd Mayweather last September, De La Hoya believes that the former unified 154-pound champion has seen something in Lara, like he did before his victory over Austin Trout.

“Yes, he’s very difficult and it’s a difficult style, it’s a tough test in front of him, but like we saw something with Austin Trout you always see something with Erislandy Lara, you see things that obviously Canelo can do and take advantage of.

The fiery red-headed Alvarez is coming off an impressive stoppage win over Mexican rival Alfredo Angulo.

He suffered a setback when he was convincingly beaten by pound-for-pound star Mayweather but has shown great resolve as he looks to re-establish himself amongst boxing’s best with victory this weekend.

“I improve on every fight and I gain experience, I get better and without an exception this isn’t going to be anything different. We feel very confident and very comfortable,” said Alvarez.

Throughout the promotion Alvarez has refused to be drawn into the perceived mind-games of the tricky Cuban, who has said that the Angulo he fought and beat was a lesser fighter than the one his younger foe overcame in March.

“I’m not going to get into his games. If I didn’t want the fight [with Lara], the fight wouldn’t be happening. The fight is here because I wanted the fight. And on July 12th we’re going to see who hits who,” he said.

“It doesn’t matter what they say [about Angulo]. They can say whatever they want. I’m not going to lose sleep over that. I know what I did. I know I did a very good fight. But that fight’s behind us. That fight’s in the past. Now I’m preparing for the next fight and for the future,” said Alvarez.