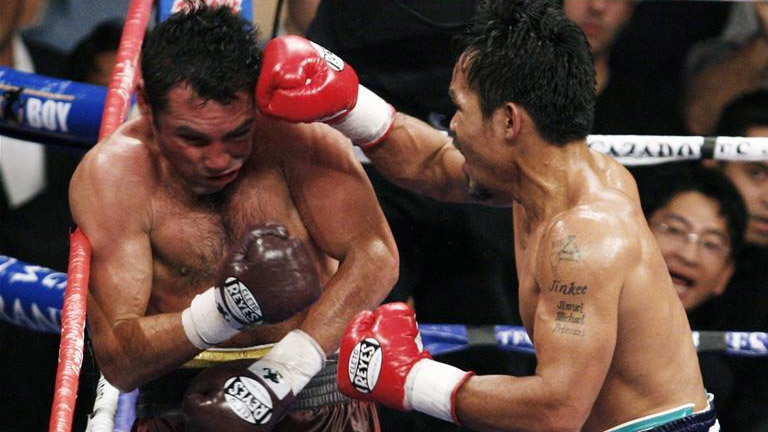 FORMER world champion Oscar De La Hoya has warned Canelo Alvarez to beware of the pressure being such a huge favourite over Amir Khan will bring. De La Hoya himself was on the wrong end of an upset defeat when Manny Pacquiao hammered him into retirement in eight rounds in 2008. Like De La Hoya was back then, Alvarez is being tipped by almost all observers to triumph in Saturday night’s WBC middleweight title clash, where Khan – like Pacquiao – will jump two weight classes for the opportunity.

“This is what he [Alvarez] wanted, Cinco de Mayo, headlining in the first fight at the T-Mobile Arena,” said De La Hoya. “How is he going to handle it? Imagine all the pressure on his back.”

De La Hoya dropped from 154lbs to meet Pacquiao – who started out as a flyweight – in the welterweight division. Many thought the contest was absurd when it was announced such was Oscar’s size advantage.

“No writer gave Pacquiao a chance before that fight,” De La Hoya said. “You start to believe the hype when you listen to what people are saying. If you are the favourite, a lot of times it affects you, gives you false confidence. In that fight, I drained myself, it was my last fight, but he still beat me. He still threw a thousand punches. I was still over-confident. I thought I was much bigger and I was just going to wipe him out.”

With that in mind, De La Hoya insisted there would be a rematch clause written into the contracts for Saturday’s showdown.

“We’ve put a rematch clause in for a reason,” De La Hoya explained. “I can sense something. Amir can throw punches in bunches and can create a lot of problems for a fighter like Canelo, who does not have his amateur experience.

“Amir is motivated. Being the underdog changes his whole frame of mind and takes him to a whole new level. If he’s running two miles regularly, he will want to run five or 10. He wants to win, he wants to shock the world.”