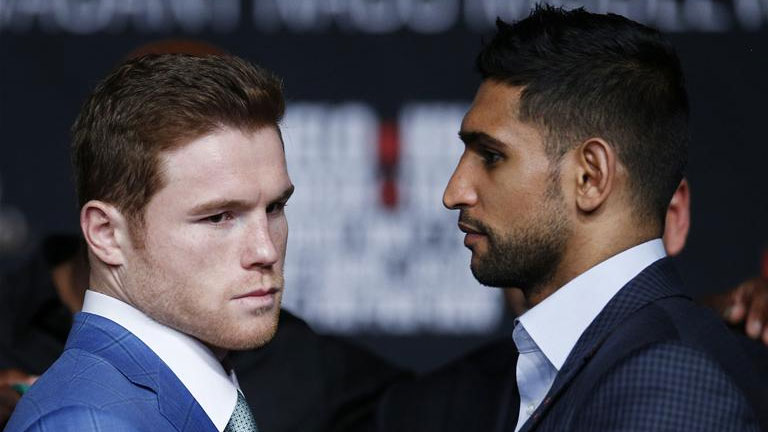 OSCAR DE LA HOYA declared that the winner of Saturday night’s contest between Canelo Alvarez and Amir Khan will “establish himself as the biggest star in the sport today.” And at the final press conference – inside the KA Theatre in the MGM Grand in Las Vegas – the two fighters certainly looked the part. Dressed in sharp suits and shiny shoes, the two handsome protagonists would not look out of place in a Hollywood movie.

Alvarez, perhaps the most marketable fighter in the world following the retirement of Floyd Mayweather and Manny Pacquiao, is aware that he is a star attraction.

“I’m very honoured to be in this position, but it doesn’t come easy, because there is a lot of pressure with this position – and that’s why I work so hard,” said the Mexican. “I keep training and I work hard so that I will be No.1 [pound-for-pound] but when that moment comes it will be for you [the media] and the fans to say. I will never call myself the face of boxing – that is up to you.”

Khan, markedly taller than his opponent, looked intently at Alvarez, and as they turned to face the cameras, confidence shone from his eyes. After years chasing fights with Mayweather and Pacquiao, he at lasts gets his chance to prove his skills at the very highest level.

“On May 7 you’re gonna see the best Amir Khan,” said the Englishman. “He’s a great champion and a credit to boxing but it’s my time. It’s been my dream to be in a fight like this in Las Vegas and I’m not going to let it go.”

His father and manager, Shah Khan added: “All the hard work is done, this is a dream for Amir. We didn’t go looking for this fight – they [Team Canelo] brought it to us. Amir wanted it, and training camp has been brilliant. We’ve never had a smooth camp like this before. The way Amir looks now is incredible.

“He’s the underdog but he’s going to prove everybody wrong.”

Khan’s trainer Virgil Hunter described his admiration for the way the underdog has rebuilt his career after three defeats.

“It’s an honour to be beside Amir in this situation,” said Hunter. “He’s been counted out and criticised for his supposed weaknesses. But here he is, moving up two weight classes.

“People that have gone through what he’s been through can get gun-shy, but I was surprised when I first saw him spar. He is fearless.”

Promoter  De La Hoya attempted to compare Khan’s mission with Leicester City’s recent Premiership triumph, but someone may have given him some duff information.

“Whoever thought that Leicester City, at 5,000-1, would win the UEFA Cup?” he asked, days after the Foxes were crowned league champions.

WHO WINS AND HOW? Get the full in-depth Boxing News preview and prediction

De La Hoya’s Golden Boy partner, Bernard Hopkins, also spoke of his admiration for Khan and insisted any talk of matching Canelo with Gennady Golovkin was disrespectful to the Englishman.

“Let’s deal with this fight before we start talking about other fights,” said Hopkins. “If you spend too much time looking down the street, you’ll miss what’s right front of you. We want to put Alvarez in with the best and this fight proves that. Oscar [De La Hoya] fought the best, I fought the best, Alvarez will fight the best, and credit to Amir Khan for putting himself forward for this fight.”

“There’s not too much more to say,” Alvarez concluded. “The fight is near. I’m very happy with the work that I’ve done, I know what Amir Khan brings and I’m very confident that I will break him down.”