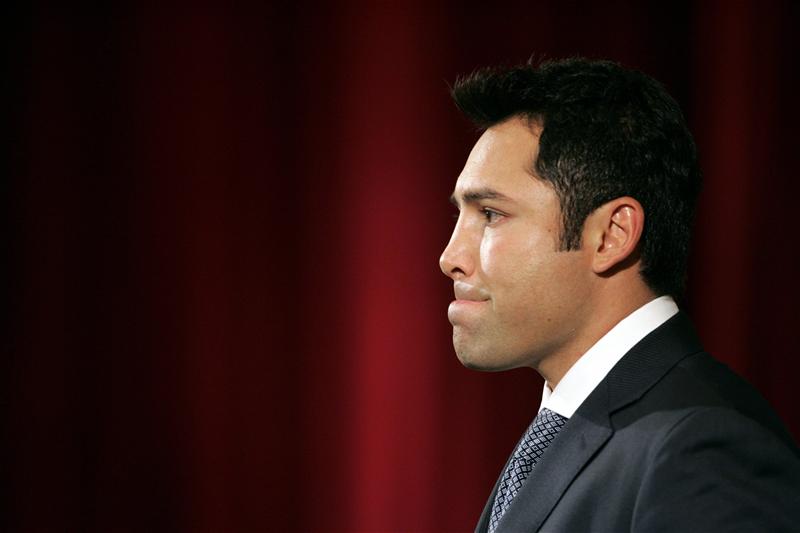 OSCAR DE LA HOYA says a Floyd Mayweather-Manny Pacquiao fight should still be made because it will see “the very best going in against the very best.”

While as a promoter he hopes to pair either one with Amir Khan, his client from Bolton, he said he still wants to see the fight that – so far – never has been.

Like almost everyone, however, he remains cynical about its prospects despite announcing on social media that he was prepared to offer both the largest guarantees made in the history of the sport to make it happen.

When asked why it hasn’t happened, he reeled out a number of party lines before perhaps hitting the nail on the head by mentioning “egos”.

“It’s very complicated,” he added. “I mean, first of all, you have one fighter with HBO and another fighter with Showtime. You have sponsors. But most importantly, you have egos and egos can get in the way of making big fights happen. I truly feel that, yes, this fight should happen, but the world will believe it when they see it.”

De La Hoya’s relationship with Mayweather has been far from rosy over the years, with animosity stemming all the way back to their fight in 2007.

Mayweather has taken shots at the “Golden Boy” on social media, and he also said he wouldn’t work with his company once they parted ways with former CEO Richard Schaefer earlier in the year.

He did, though, working with Golden Boy on his last fight, the rematch nobody wanted with Marcos Maidana.

“Well, I mean, obviously we did promote his last fight with Maidana,” said De La Hoya, “so we’re always happy to be working and promoting Mayweather. We’ve done it for the last ten fights, I believe.”

For more from Oscar De La Hoya on the path he hopes to map out for Amir Khan, click here.