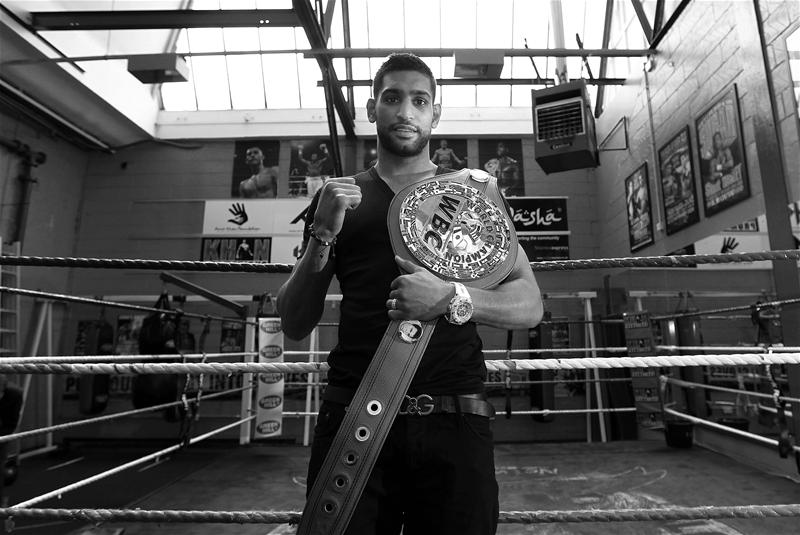 That is the view of his promoter, Oscar De La Hoya a few days before the Bolton contender meets Devon Alexander here in Las Vegas as he hopes to manoeuvre his man into fights with either Floyd Mayweather or his old Wild Card stablemate Manny Pacquiao – two fighters who hold victories over the “Golden Boy.”

“Amir Khan is going up against, once again, a very difficult, tough fighter in Devon Alexander,” said De La Hoya. “​We strongly feel that fighting in the welterweight division, Amir Khan is a force to be reckoned with. He is a threat to everyone in the welterweight division. He not only proved that against Luis Collazo but he’s ready to prove it once again on December 13th.

De La Hoya, who holds faint hopes for Mayweather-Pacquiao ever happening, says his job is to bring those names to Khan.

“I am pushing for a Manny Pacquiao fight,” he went on. “I do want to push for a Mayweather fight, because Amir Khan deserves those type of fights. But first things first, Devon Alexander is a very tough, tough opponent in front of him; it’s a very tough fight, but we’re definitely looking forward to it because Amir Khan always creates exciting fights for his fans.”

In a possible shot at his former Golden Boy colleagues, he continued saying, “I mean, look, for Amir Khan it really, it really kind of rubs me the wrong way that Amir Khan has been promised fighting the likes of Mayweather and Pacquiao and it hasn’t happened yet. You know, after this fight, I would love to really put Amir Khan with the very best. Again, we’re going to try to get Amir Khan with either Manny Pacquiao or with Floyd Mayweather because that’s what he deserves.

He insisted Khan-Alexander was doing well at the MGM Grand Box Office and that Khan’s popularity in the UK is another strong selling point.

It is all well and good promising Mayweather. But nobody tells Floyd what to do, and if the American wants the Pacquiao fight, Khan will be left in a line looking at other options. Fortunately, De La Hoya has another high-profile contingency.

“Well, we obviously then would have to go back to the drawing board,” he said. “One fighter that comes to mind, for instance, would be a Kell Brook. I can see that type of fight happening at a Wembley Stadium, for instance, in front of a hundred thousand people. So that would possibly be Plan B.”

Not a bad Plan B, but De La Hoya has this week been focussing on Plan A being Mayweather or Pacquiao.

“I truly feel that Amir Khan fighting a Mayweather, Amir Khan’s style can give a lot of trouble to Mayweather. And Amir Khan fighting Manny Pacquiao can give Manny Pacquiao a lot of trouble, because Amir Khan is not only a boxer, but he’s also a fighter. He’s a fighter that will stay there in front of you and exchange, but he’s very smart. He can box you, he can punch you; he’s a smart boxer-puncher, and those are the most dangerous.

“Not only because he’s smart, but because he believes in his ability. He believes that he can knock anybody out. He has a great combination going for himself. He can punch and he can box. That’s one thing about Amir Khan is that if he hurts you, he’s going to finish you.”

De La Hoya also reckons, however, that Khan not only needs to defeat Alexander but he needs to win well.

“Look, I truly feel that let’s say if a Manny Pacquiao fight doesn’t happen next year for Floyd, then he has no choice but to fight Amir Khan, especially if Amir Khan has a spectacular performance. I mean, the public is demanding it. The fans are demanding it and that’s how we have to push it, through the media, through the fans. It’s been a long, frustrating road for Amir Khan waiting for that big fight against Mayweather, so that’s the fight that I’m going to push for.”

“Amir Khan is a superstar,” he concluded. “Amir Khan is a fighter who everybody wants to fight, he’s in a great position. Amir Khan has been promised major fights now for a while against Floyd Mayweather. You know, the time is now for him. I truly feel that 2015 will be Amir Khan’s year.”