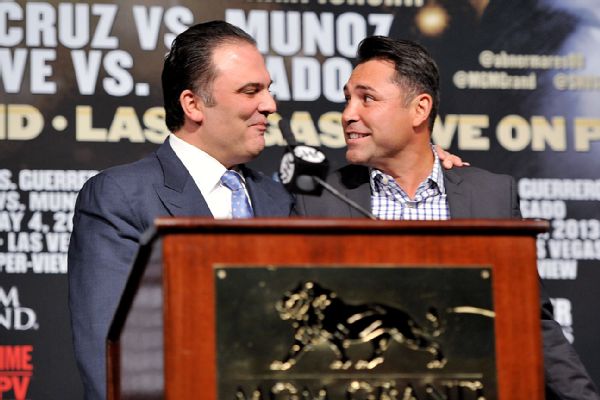 THE president of Golden Boy Promotions, Oscar De La Hoya, and his former CEO, Richard Schaefer, have reached a settlement on their arbitration case. As part of the deal, De La Hoya will cut ties with a string of top fighters managed by Al Haymon.

It represents a bittersweet conclusion to the feud for De La Hoya, whose company will likely be awarded millions of dollars but also be forced to relinquish involvement with some of the sport’s biggest money earners – some of whom have been on Golden Boy’s books for all of their careers.

However, not all of Haymon’s stable will no longer work with De La Hoya. Fighters like Amir Khan, Lucas Matthysse and Leo Santa Cruz all have existing contracts with GBP that will remain.

It is believed that the cracks in De La Hoya’s and Schaefer’s relationship started to appear when promotional contracts were with Haymon’s fighters were not renewed.

It’s likely that Schaefer will be forced to give up his 8 per cent share in Golden Boy, and not work within boxing promotion for a while. At the time of writing, his contract with De La Hoya’s organisation runs out in 2018 and his involvement in boxing maybe stalled until after that date.

Pacquiao expects Mayweather fight to be confirmed this month