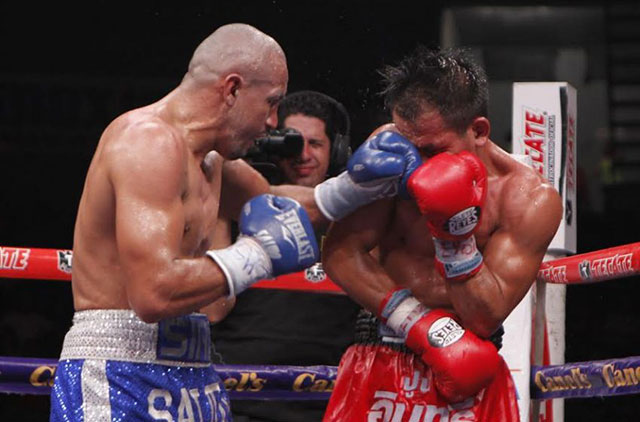 The warriors tede seven knockdowns before Salido triumphs in the 11th round, writes James Slater

THE fact that Mexican warrior Orlando Salido captured the interim WBO super-featherweight title with his stoppage win over Thai southpaw Terdsak Kokietgym on Saturday night (September 20) was almost a side issue, so utterly dramatic was the fight. Trading vicious punches and hurtful knockdowns throughout, Salido and Kokietgym gave fight fans a definite Fight of The Year candidate in Tijuana.

Kokietgym drew first blood, flooring the 33-year-old warhorse, who was moving up to super-featherweight after defeaing heavily hyped amateur star Vasyl Lomachenko in March, with a left hand counter to the jaw in the opening session. Hurt but up quickly, “Siri” returned the favour, albeit with an intended body shot that strayed below the beltline (with referee Eddie Claudio missing the unintentional foul). The war was now on and plenty of white-knuckle drama ensued.

Floored again in the second and fifth rounds, Salido, at times looking his age and a little older, nevertheless also showed his toughness along with his heart and determination. Kokietgym, who had the peculiar habit of leaning backwards over the ropes at the start of each round, was dangerous throughout, yet he too hit the deck a number of times, going down again in the fourth-round (going down twice here, his first trip south being ruled a slip) and in the seventh. Finally, after some mesmerising toe-to-toe action, Salido closed the show with a brutally hurtful four-punch combination to the head that left Kokietgym down and out after just 16-seconds of the 11th-round.

In all, the two traded seven knockdowns and, with scarcely a clinch in sight, plenty of leather. Mexico aside, the fight flew largely under the radar on a Saturday night that saw a number of fight cards taking place, yet it’s quite likely Salido-Kokietgym will get plenty of attention when 2014’s year-end awards are given out – this fight being in with a shout of receiving Fight of The Year, KO of The Year and maybe even mid-fight Comeback of The Year distinctions.

Salido has a distinctly average looking record at 42-12-2(29), yet as those fans who did witness his fantastic battle against the now 53-5-1(33) Kokietgym know, there is nothing average about Salido’s grit, heart and sheer fighting ability. Some critics may well argue that Salido should not have been pushed so hard by the Thai who is known as “Pit Bull,” and Salido’s long and hard career may perhaps be coming to an end (he’s been a pro since 1996 and has engaged in a number of wars). For now, though, this somewhat underrated slugger can bask in the glory of a truly great fight and victory.