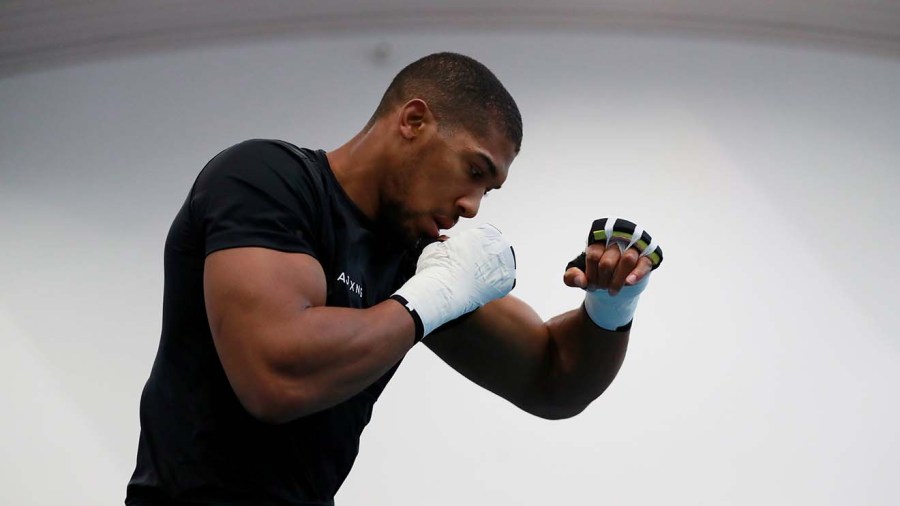 NOTHING looks right in the heavyweight division these days. The bodies, once regular sized and almost relatable, don’t look right and the belts around wider waists don’t look right. There are too many of them, their meaning devalued, and too many fighters, because of this, have licence to call themselves champions.

Then there’s the schedule. That doesn’t look right, either. On it are fights, title fights, but not the ones anybody really wants to see. Title fights in name only, they tend to feature undefeated champions eager to remain undefeated against unheralded challengers eager to get paid. It’s a recipe not so much for clarity as ambivalence.

Another thing that doesn’t look right is Andy Ruiz Jnr, the next contender out to try and shock the world. To the casual observer, his face doesn’t fit, not as a heavyweight title challenger, nor as Anthony Joshua’s equal on a fight poster promoting a WBA, IBF and WBO world heavyweight title fight at Madison Square Garden, New York on June 1. His face is quite round, you see, only not as round as his stomach, and Tyson Fury even went so far as to compare Ruiz to a nine-year-old wilderness explorer from a Pixar movie. Cruel though it was, many saw the likeness.

Those more familiar with Ruiz, 32-1 (21), know his belly belies his skillset, but that’s beside the point. Cast as a heavyweight title challenger, he doesn’t look right, and the fight itself, Joshua’s US debut, doesn’t feel right as a result.

Much of the reason for this is because, in an ideal world, it would be Deontay Wilder, owner of the WBC heavyweight title, welcoming Joshua, 29, to America this weekend with four belts on the line. That’s the direction in which the heavyweight division should be moving and how the picture should look.

That it won’t look this way is hardly Andy Ruiz’s fault, though. After all, the Mexican-American didn’t even appear on the first run of posters used to promote this weekend’s event. Rather than Ruiz, on the right-hand side of the original was Jarrell Miller, the disgraced Brooklyn heavyweight who misunderstood the meaning of a cheat day at the end of a week’s hard training and failed three performance-enhancing drug tests. It cost ‘Big Baby’ a reported $6 million payday, as well as the chance to become heavyweight champion of the world, and it threw the promotion into disarray.

The choice of Miller was hardly compelling, not when Wilder and Fury loiter, but it did have some appeal on account of the fact the American could spin a yarn, didn’t hold back when he pilloried Joshua, and was undefeated in 24 professional fights. Though he talked his way into a title shot, Miller did so in a manner that at least made things interesting and stirred something in Joshua, a champion whose demeanor is forever measured and on-brand.

But, in the end, Miller jabbered too much. He spoke out of turn, he lied to us and, worse, he tried talking his way out of it. Only when sensing it wouldn’t wash did he own up.

Of the names bandied about to replace him, the good ones appeared too good to be true and the not-so-good ones appeared alarmingly feasible, borderline unwatchable. More concerning, though, was the rate of opponents apparently turning down the shot, with some suggesting their reluctance perhaps owed to an inability to flush their systems of illegal substances rather than a lack of interest in a multi-million dollar payday. Jarrell Miller, it seemed, opened the door for colleagues to get rich yet was responsible, too, for reminding these potential replacements to watch their step and get their dates right. He giveth, he taketh away.

Then along came Andy Ruiz, the unlikeliest of heroes, fresh from a fifth-round stoppage win against Alexander Dimitrenko. That fight happened on April 20, so not long ago, and this not only strengthened his case but means Ruiz is busy, ambitious and presumably free from the sort of treats ‘Big Baby’ consumed on cheat days. It also means Ruiz, often criticised for his wavering discipline and physical condition, should be in decent shape and arrive well prepared.

If he is, Ruiz has the ability to surpass the lowly expectations of those judging him solely on looks. Because looks can be deceiving and, in this case, they probably are.

Defeated just once in a 10-year professional career, Ruiz typically wins fights because he is too fast for opponents, both with his feet and his thinking. Better yet, he demonstrates no aversion to standing in range and is aggressive in a way many heavyweights aren’t, so conscious is he of honouring his Mexican heritage.

At six-foot-two and 260 pounds, Ruiz perhaps shouldn’t be as successful as he has been, nor any better than he looks. But it’s a testament to his natural ability and fighting spirit that most men his size – and plenty bigger – can’t stick with the 29-year-old once he finds his groove.

“It’s not about what you look like – it’s a craft, a skill,” Joshua, 22-0 (21), said when attempting to promote the virtues of his next challenger. “What’s in your heart and head matters in the end. Andy has shown he has all that. He can fight and box. That’s what matters. I think Andy is a great challenger and will bring it on 1 June.”

While there’s no doubting he will, it could be argued Ruiz’s lauded speed – his key attribute in this fight – owes as much to the lumbering habits of his opposition as it does his capacity to quickly pull the trigger. It’s rare, for instance, that any fighter opposing Alexander Dimitrenko or Siarhei Liakhovich or Ray Austin or Devin Vargas or Kevin Johnson would be considered the slower of the two. To these men, Ruiz will have seemed as though he was operating on fast-forward, whereas against Joshua the disparity might not be so evident. That’s something worth keeping in mind.

The real knock on Ruiz, more so than his shape, is the sole pro defeat on his 33-fight record. That came against Joseph Parker in 2016 and was admittedly a close one, the kind of fight decided more by its location than anything else. It took place in New Zealand, home of Parker, and Ruiz, despite a bright start, eventually succumbed to Parker’s work-rate, the fervour of his countrymen and the generosity of three judges. A majority decision was awarded to Parker, who then lost his WBO heavyweight title, the belt acquired in beating Ruiz, in a 2018 unification fight against Anthony Joshua.

The year after he lost to Parker was a quiet one for Ruiz. He didn’t fight at all. But he did return in 2018 to beat Americans Vargas and Johnson and then did the same to Dimitrenko in 2019. Now he has a shot at three of the four heavyweight titles.

Thanks to this unconventional route, many will question how someone unable to beat Joseph Parker, regardless of the circumstances, has ended up landing a shot against the man who then went on to relieve Parker of his world title. It’s an obvious point to raise, of course, but let’s not forget that this is boxing, fights happen and then fall apart, nothing’s fair or deserved, and often it is the safest of the available options – either in terms of the fight or the promotion – a champion will seek when desperate.

Ruiz, if nothing else, is reliable. With him, you know what to expect. You know his good points as well as his bad points and you have seen him fall short at world title level, albeit narrowly. The promoter would prefer it if he was unbeaten, if only because it makes him an easier sell, but, equally, comfort can be taken from knowing Ruiz has succumbed to a man Joshua bested with relative ease.

“From the outside they think that anyone can box, so how is the guy who doesn’t look like a fighter able to box?

“I always say that if you put 10 bodybuilders in the ring, not one of them could fight for a regional title in boxing.

“Take me out of my body but keep the same attributes – height, jab, chin, heart and mind – and I’d still get to the same position I am in because it’s what’s within you that makes a champion.

“He’s keen, he’s game and you cannot knock him. He can fight and he’s got hands. He gave Joseph Parker, a world champion, lots of problems. Andy is championship level, for sure, and I have not underestimated him one bit.”

Again, it comes back to image, that is, the image of Andy Ruiz and what it means to be a world heavyweight title challenger in 2019. Should a challenger resemble Ruiz, the fun, bubbly type, all soft edges and boy-next-door appeal, or would we rather they looked more like Jarrell Miller, someone whose dubious training regime left his neck as wide as his backside?

“I think the fight is going to be toe-to-toe – two guys smashing each other’s faces,” Ruiz said. “I’m going in there to throw combinations like I’ve never done before.

“When I pull out this win, everything is going to change. I’m going to bring the titles back to Mexico. It’s a win-win situation, but the main thing is to win the fight and make history.”

Because nothing looks right in the heavyweight division these days there is something quite fitting about Andy Ruiz’s emergence as world title challenger and potential party-pooper. A refreshing change of pace, his imperfections are not a patch on those of the weight-class, while his hunger, no pun intended, is entirely at odds with the entitled and laidback attitudes of his more illustrious peers.

If in doubt, remember how he got this shot. He was awake when the rest were sleeping, he was clean when they were dirty, and it was earned not because he necessarily deserves it – based on recent form – but because he wanted it and because, unlike the others, champions included, there is an intensity to Ruiz, in keeping with his fighting style, most welcome and unusual at this moment in time.

Forget looks. The others would be well-advised to simply look and learn.