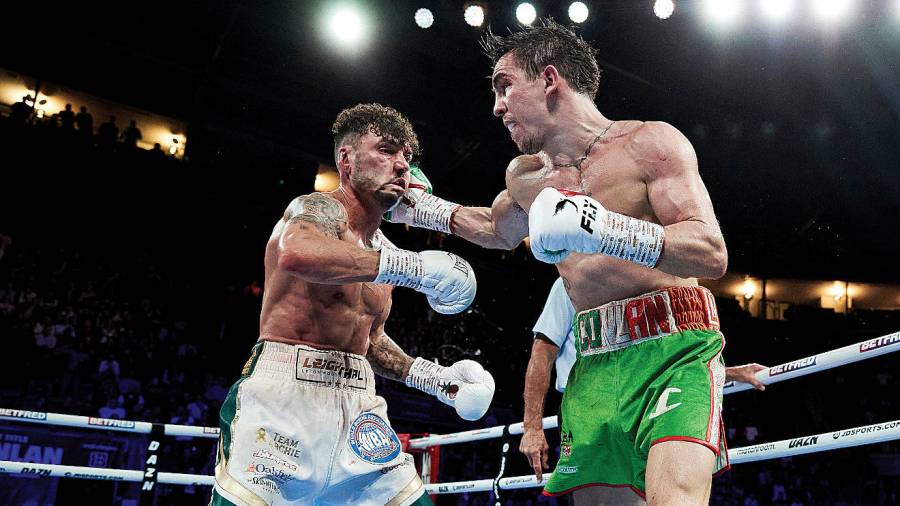 Both fighters covered themselves in glory during an unforgettable fight destined to live long in the memory. Andy Whittle was ringside for Leigh Wood vs Michael Conlan

LEIGH WOOD made his way to the ring to the strains of Labbi Siffri’s Something Inside So Strong after former Olympian Michael Conlan strutted into the supercharged atmosphere with All Along the Watchtower booming through the Nottingham Arena. To the uninitiated, the Jimi Hendrix song opens with the words, ‘There must be some way outta here, said the joker to the thief. There’s too much confusion, I can’t get no relief.’ Wow. How apt both tracks were considering what was to come.

Local favourite Wood fully lived up to his “Leigh-thal” tag in front of an incredibly noisy crowd, rallying from a heavy first-round knockdown and several subsequent minutes in a daze to sensationally halt Belfast’s Conlan with just 95 seconds of the pair’s titanic and unforgettable 12-rounder left to run.

Conlan, with several thousand cheering him on, made a cracking start. He sent Wood over backwards with a looping left hand just as the bell sounded to conclude the opener. Referee Steve Gray looked carefully into Wood’s eyes before the WBA ‘regular’ featherweight belt-holder wobbled to his stool. It seemed likely that Conlan would win with his first attack of the second but the ensuing moments were about to prove that the man from Gedling is made of stern stuff. He bit down on his gumshield and weathered the storm that he knew was coming his way. Conlan raided the body and a booming hook rocked him to his heels momentarily once more

That second session also saw the Belfast man pick up a cut above the left eye, almost an inch across, with the man in the middle telling the corners that a clash of heads was the cause. By the third Leigh was starting to regain his composure, the crowd were getting behind him again as he ventured onto the offensive. He was able to unload a little after backing Conlan to the ropes on several occasions, not that Michael wasn’t replying and Leigh was soon nursing a bloodied nose.

I gave Wood the fourth but Conlan wasn’t about to let things slip. He came back strongly again in the fifth, slamming home a pair of weighty lefts to the head early in the round before a spell of exciting trading, with no prisoners being taken by either man. Wood suffered a cut when their heads bashed together.

Another improved spell at the half-way mark might have been enough to win Leigh the sixth and while the pace eased a little in the next it culminated in a particularly feisty last 10 seconds.

Despite 33-year-old Wood pressing and looking to take it into the trenches, Conlan – working behind the jab – was still getting through to the body regularly and hurling blows upstairs. The majority of the eye-catching shots were being crafted by Conlan but Wood, to his great credit, still refused to buckle.

The 30-year-old Northern Irishman looked to have a handy lead going into the 11th. Yet more left hooks whipped into the target zone as Conlan tried again to apply the finishing touches. The bell was not far away when, with the pair standing and trading yet again, Leigh sent his supporters into raptures when he caught the already off-balance Belfast man with a flashing left and sent him over.

Conlan, tiring and with blood still trickling down his cheek from that wound above the eye, claimed a slip but a punch certainly landed. The 12th began with the atmosphere white-hot and the Nottingham crowd roaring Wood forward. With time running out, the buoyant underdog reacted to the bell to start the final round like a man on a mission. A warning to not push his opponent slowed him only momentarily. An unseen right hand clumped into the head of Conlan and his gloves immediately dropped to his sides. Initially sitting on one of the ropes, he was already unconscious as Wood attempted to follow-up. Conlan tumbled backwards from the ring and onto the floor at ringside, almost at the feet of his older brother Jamie and promoter Eddie Hearn. Referee Gray, who made a valiant attempt to grab the stricken fighter, waved an immediate halt to allow paramedics to attend. The harrowing scene was complete when Michael was whisked from the ring and away on a stretcher as Wood, hands on head in centre ring, looked on in horror. Wood showed as much class in that grisly aftermath as he had in combat, as he signalled to his fans to quieten down and he refused to celebrate the best win of his career.

All three scoring judges had Conlan ahead going into that last round, Bob Williams and Panama’s Guillermo Perez Pineda by 104-103 while Poland’s Leszek Jankowiak had it wider at 105-102.

It came as a relief to all when a few hours later Michael sent a couple of tweets from the nearby hospital, initially reassuring everyone with, “I’m all good folks” , followed by, “Definitely want a re-match lol”. After being given the all-clear he returned to the fight hotel the following morning where the two bravehearts embraced. It was a see-saw, oft-brutal affair, albeit with the kind of finish that makes even the most hardcore of fan wonder why they love this sport so much. Thankfully, Conlan’s quick recovery means everyone can now reflect on this contest with pride. A sequel seems likely and outdoors in the summer at City Ground, home of Wood’s beloved Nottingham Forest, would be huge.

“She’s back in the saddle,” said Stefy Bull after a visibly emotional Terri Harper secured a wide 10-round points victory over Argentina’s Yamila Belen Abellaneda, all three judges scoring 99-91.

Ignoring a diagonal cut to the left eyebrow suffered as early as the third, the Denaby Main girl, just four months after a brutal one-punch loss to Alycia Baumgardner in Sheffield, handed the visitor something of a lesson. It illustrated she is far more comfortable at lightweight and is carrying no ill-effects from her recent defeat.

Confident from the outset and on the front foot from the word go, Terri didn’t take long to force Abellaneda onto the retreat. Regular combinations delivered by fast hands set her on her way to victory and, while she switched stances regularly in the second half with varying degrees of success, she had sufficient cushion for it not to particularly matter that Yamila became more offensive late on. Referee was Watford’s Bob Williams.

The 10-round contest between Derby’s well-supported Sandy Ryan and Argentina’s Érica Anabella Farías ran its course before being declared a split decision victory for the latter. Farías, previously a two-weight belt-holder, was certainly a step up for the confident Clifton Mitchell-trained fighter. After a stellar amateur career this was only her fourth outing as a pro and she will have learned hugely from the experience despite her disappointment at the outcome.

I had the busier visitor well ahead by the halfway mark but Sandy, buoyed after getting through with several lefts downstairs, reduced the lead in the second half. Judges Steve Gray and Bob Williams scored 97-94 and 95-94 for Farías at the finish while Mike Alexander was generous to Ryan, tallying 97-93 for the home fighter. Newark’s Kevin Parker refereed.

Heavily-tattooed Naas lightweight Gary Cully secured a career-best fifth-round knockout victory over Mexico’s fading former IBF belt-holder, Miguel Vázquez. Vázquez was cut in the second, dropped in the third before the end came at 41 seconds of the fifth. A combination had the veteran rocking before a punishing left finished the job. Vázquez made it up as far as one knee as the count reached five but could rise no further.
There was an Irish inside the distance victory too up at heavyweight when Dubliner Thomas Carty, increasingly in charge and on course for a wide victory over six against Poland’s Michal Boloz, was deemed the winner with 33 seconds of the penultimate session still to run. The end came after a second inspection of the Pole’s badly swollen and rapidly closing left eye. Referee Mr Parker called a halt.

Belfast’s Caoimhín Agyarko, nicknamed “Black Thunder” had to settle for a distance victory over 10 against crafty southpaw Juan Carlos Rubio. The Mexican was not particularly offering much on the offensive side but did prove a tough cookie nevertheless. Two scores of 100-90 (Mike Alexander and Guillermo Perez Pineda) and one of 98-92 (Leszek Jankowiak) told the right story of just how one-sided this one was.

Liverpool light-heavy Thomas Whittaker-Hart went in against Bolton’s Ben Thomas in the evening’s curtain-raiser and needed just 43 seconds of a scheduled six to get the job done, a left to the body sending the boxer dubbed “Big Ben” to all-fours in front of his own corner. Clearly distressed, Thomas made a half-hearted attempt to rise but then thought better of it and referee Mr Dean completed his count.

Bedecked in the yellow and blue of his favourite Mansfield Town FC, former two-time elite champion Nico Leivars ditched the vest for the first time and went in over four against Gerona-based José Hernández and secured a one-sided victory. Under the tutelage of Grant Smith, the man from the Nottinghamshire town landed frequently with both hands. Solihull referee Chris Dean scoring Lievars a 40-34 winner with the visitor being docked a point in the last for holding before being floored in the dying seconds by a left to the chin.

The Verdict Wood-Conlan destined to be remembered as one of the best fights to take place on British soil.