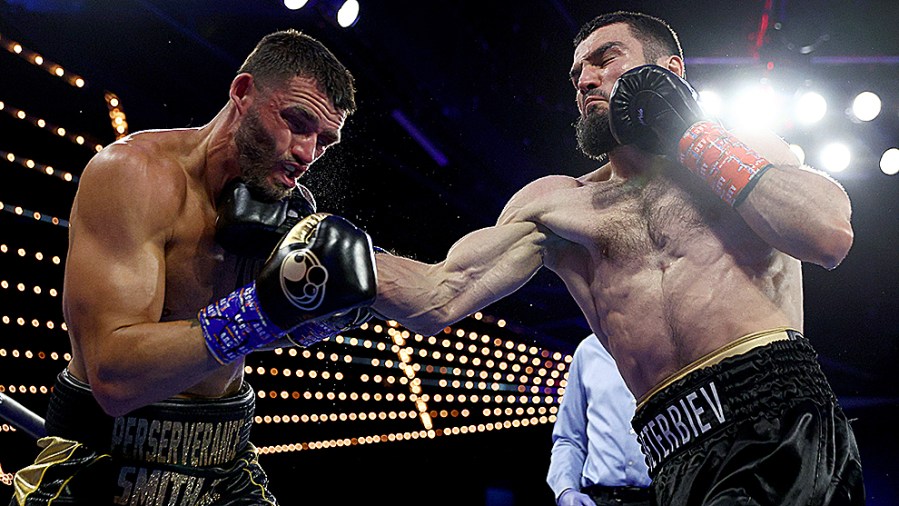 WHILE it wasn’t quite on par with Peter McNeeley’s sterling effort in ’95, Joe Smith Jnr’s cavalier and kamikaze approach to fighting monstrous puncher Artur Beterbiev tonight (June 18) in New York was, alas, destined to only end one way: the same way.

The approach, which Smith actioned from the very first bell, ended in tears for Smith and a big KO victory – yet another one – for Beterbiev, a scarily powerful light-heavyweight from Khasavyurt, Russia. More accurately, the approach resulted in Smith being stung by a Beterbiev right hand as early as 15 seconds into the fight, then dropped once in the first round and twice in the second before being stopped on his feet before the third had even entered the equation.

The official time of the stoppage was 2:19 of the second round, yet the fight, in truth, was over long before that. In fact, one could go so far as to argue it was over the moment Beterbiev landed his first right hand, the one thrown to the side of Smith’s head after just 15 seconds, for the impact of this punch was starling, especially in hindsight.

What might have been an innocuous blow thrown by daintier hands had, in this instance, the effect of panicking Smith into action, with his own right hands immediately turning loopy and desperate and his jab now pumped out frenetically, almost as though by virtue of it being active he would somehow reduce the likelihood of Beterbiev throwing punches of his own. He was, in other words, reduced to a picture of tension and nervous energy. The more Beterbiev attacked, the more Smith’s anxiety increased.

Nonetheless, Smith’s approach was bold, no doubt. Some might even say the approach to fighting Beterbiev was the only one, given his limitations, available for Smith, 28-4 (22), to try. Yet, whatever the rights and wrongs of it, at no point, despite his aggression, did Smith offer anything other than an illusion of control and dominance. At no point, for example, did he ever do anything with the positions in which he found himself, or, for that matter, trouble Beterbiev with punches of his own.

Instead, with Beterbiev someone accustomed to harassing opponents and doing most of the instigating, all Smith’s strategy ultimately did was allow Beterbiev the chance to relax and prepare, for once relieved to have his prey come to him for a change. Briefly, he would move, with his hands held high to protect himself from Smith’s roundhouses, and occasionally, too, he would pop a series of jabs at Smith, just to let him know he wouldn’t be allowed to invade unopposed. But this, for Beterbiev, amounted to little more than a waiting game; a rigged game; a one-player game.

Still, if you knew no better, it would be easy to see Smith marauding forward and think, for at least the first 90 seconds, he was on to a good thing. He was rough, he was active, he was determined. Even if unable to convince himself, he was at least courageously trying to convince others.

One man unconvinced, of course, was Beterbiev. He, at that same 90-second mark, sprung into life again with a right hand and Smith, falling into it, reacted by lunging towards his opponent to secure a clinch. It was another sign Beterbiev was merely waiting for his opportunity to strike.

After that, something had changed between the pair. The dynamic had shifted. Their positions had switched. Now, rather than Smith eagerly galloping forward, it was instead Beterbiev who claimed the centre of ring, instinctively knowing his earlier right hand had damaged Smith. In response, he simply threw more of the same, over and over again, causing Smith to cover up. It then wasn’t long before Smith went down, albeit ruled not a knockdown but a slip.

Regardless, the writing was on the wall. Hurt or otherwise, Smith was now unsteady and cautious, his ambition all but gone, and once upright again he found himself wounded by both Beterbiev’s jab and a couple of vicious rights ripped into his midriff. Those were merely setups, though; setups for more right hands, one of which, thrown by Beterbiev in the dying seconds of the opener, finally dropped Smith to one knee, marking the first time the American had been knocked down as a pro.

In all the commotion that followed, he bravely bounced back up but, tellingly, could be seen jogging on the spot as the referee, Harvey Dock, administered the count. It was a sign, to these eyes at least, not that Smith was ready for action but more that he was desperate to restore life to legs that, via a series of clubbing Beterbiev blows, no longer felt like they belonged to him.

Going into the second, the pattern could not have been any more different. Whereas before Smith had placed blind faith in his own power and chugged forward, hoping to get Beterbiev before Beterbiev got him, now it was Beterbiev who initiated the exchanges. Now it was Beterbiev whose presence in the middle of the ring overwhelmed that of Smith.

Indeed, it was following one particularly brutal exchange that Beterbiev stepped back and caught Smith again with that same cuffing right to the side of his head, the shot having exactly the same effect as before. Down on one knee, it was clear, even if he carried on, Smith’s final moments in a fight still in its infancy were to be nothing more than a last stand; the last stand of a man not only waiting for his fate to be sealed but eager for the axe to fall sooner rather than later.

Luckily for him, with Beterbiev the one in possession of it, that was never in doubt. Soon enough, left hooks and uppercuts, followed by another right, sagged Smith against the ropes, where he was once more protected by the referee and given a count.

More than protection, though, what Smith needed was saving, a fact never more apparent than when seeing Beterbiev across the ring bouncing, jumping up and down, menacingly so. Now everyone who saw it, Smith included, understood what was to happen next and Beterbiev, striding forward, duly delivered on this, cracking Smith with two uppercuts, a left and a right, both of which so badly discombobulated Smith he turned his back and the referee intervened to wave the fight off.

Afterwards, Beterbiev, whose record now stands at 18-0 (18), said: “I wanted to be a good boxer today. That’s why I was a little bit better than I was in the past.

“Joe is a little bit open and it was more easy for me to get him. It was two fighters who both have a good punch and both were trying to get there first.

“This time, I got lucky and got him first. Unification fights are more interesting, more motivating. I want to be undisputed.”

To become undisputed Beterbiev, 37, will now set his sights on a fight against Dmitry Bivol, his countryman. Bivol, however, unlike Smith, is not so open, will not “try to get there first” and, moreover, following a tremendous win against Saúl ‘Canelo’ Álvarez in May, is a man whose self-belief is currently more than justified. Match Bivol with Beterbiev – which, let’s be honest, is the only fight at light-heavyweight that makes sense – and we could see something quite special.