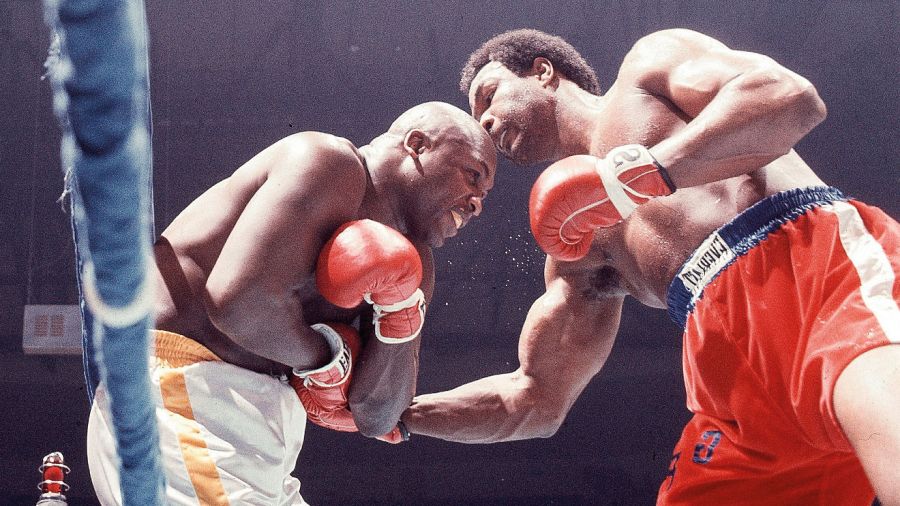 GEORGE FOREMAN w rsf 5 JOE FRAZIER
June 15, 1976; Nassau Coliseum, Uniondale, NY
THE marketing for this not exactly eagerly awaited rematch – there were 7,000 empty seats in the arena – promised: “No dance steps. No stalling. No stick and move. No clowning. No time to catch a breath.” Yet Frazier had other ideas. Past his best and acutely aware how dangerous his opponent was after being blown away in two rounds by Foreman three years before, Frazier, who shaved his head on impulse just hours before the fight, came out dancing, sticking, moving and clowning as Foreman found ample time to catch his breath. Frazier had more success with his newfound approach, particularly in the fourth, but his reactions had faded and in a mature and underrated display Foreman brutally stopped him in the fifth.

DID YOU KNOW? At the time, Foreman lived at his Texas ranch with nine German shepherds, a bulldog, a Doberman, 18 horses, two hounds (he liked to hunt and eat raccoons), a lion, a tiger and a parakeet.

WATCH OUT FOR: The moment when commentator Howard Cosell realises Frazier, as he enters the ring, has shaved his head for the fight. You’d think he’d plucked his own eyeballs out. “Look what he’s done! Look what Joe Frazier has done!”