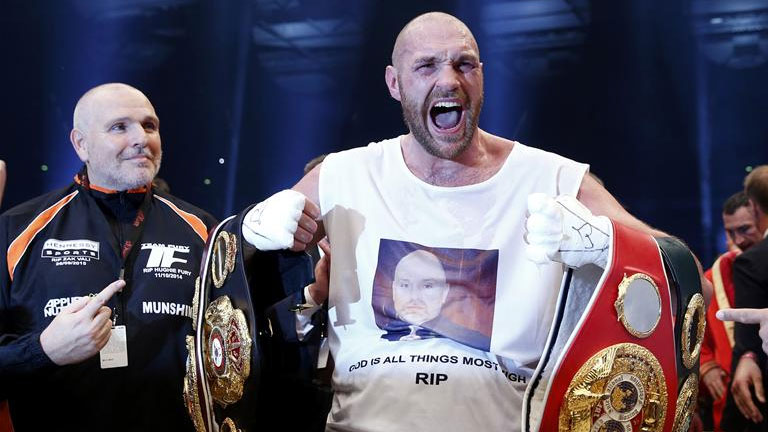 One year ago today Tyson Fury dethroned Wladimir Klitschko. John Dennen was in Dusseldorf for that fateful night

TYSON FURY made the surreal become real. He stands in the centre of the ring, belting out an Aerosmith number to the stadium, to his own wife, to Lennox Lewis. The crowd joins in to take up the chorus. This is the new heavyweight champion of the world and he’s doing things his way.

Fury did near enough everything his own way. After a delay to proceedings to start the fight, which obliged Wladimir Klitschko to wait, Tyson strutted to the ring, swinging loose arms by his sides. Aware of the crowd, he played up to them as he sauntered across the ring canvas. If he wasn’t six foot nine you would call him a scamp. Klitschko, vastly experienced, the elder statesman of the division was meant to teach him a lesson. Yet he could never get Fury under control, while Tyson maintained a cavalier attitude from the first to the last round of the fight.

It’s scarcely believable that Klitschko, with all his experience, never settled into the fight. Fury in contrast was impertinently relaxed. The spark of madness, that had seen him roam through a press conference dressed as Batman, taunt Klitschko, proclaim his own greatness and more, might have been extinguished by the cold truth of stepping in the ring with a technical master. Fury instead weaved his own reality. Two days before the fight Tyson insisted it would be easy. It was never straightforward, but he made it look easier than it should have been.

As early as the first round, Roy Jones-style (bet you never thought you’d read that in a sentence about Tyson Fury), he put his hands behind his back, daring Klitschko to come for him. Wladimir didn’t accept the invitation.

The champion couldn’t figure out the showboating dervish in front of him. Wladimir crept closer, but even when in range, he simply didn’t throw enough punches. The main reason for that was Tyson’s constant movement. He sidled from side to side, he wouldn’t allow himself to be pinned down. The punches he didn’t throw, his feints and jerky twitches, did the most damage. They lulled the Ukrainian into an unnerving rhythm. Only occasionally did Klitschko manage to steer him into a corner, but Wladimir didn’t seize those chances to unleash an assault. He should have done.

Tyson slung his fists more freely, cantering forward he stabbed in a hard left at the end of a combination.
It snagged Klitschko’s head, Wladimir felt the weight of it. The Ukrainian’s defence though was solid. He held his gloves high, defensive and quickly padded away the shots Fury flung at him. Tyson chalked up the first two rounds. Trying to shake himself out of the trance, Klitschko upped his tempo in the third round,
he had to. He closed in more quickly, the early signs of anxiety creeping over him. In their pre-fight encounters, Tyson had seemed the more agitated. Now the roles reversed.

The Wilmslow traveller did switch stances, picking his moment to do so. The fear was that this might open
him up to Klitschko’s heavy right cross. In practice it proved yet another move that disrupted the Ukrainian’s judgement of distance, allied to Fury’s troublesome reach and height. Wladimir came out quicker again in the fourth round, looking to land his left hook. But even in clinches, which Klitschko often resorted to, Fury would not be bullied. Tyson doesn’t have the same chiselled physique, but he hung strong on the inside. He shot a right after Wladimir, who backed off smartly to keep clear.

Klitschko’s jab, a weapon the great man has mastered, couldn’t find the mark. Hesitant with it, from there doubt seeped into him, corrupting the rest of his work. Rarely attacking the body, Wladimir did fire off jabs downstairs in the fifth round and locked Tyson up in a tight clinch. Generally Klitschko kept his gloves up and his eyes clear but he sighed deeply, taking in a breath. Before the halfway stage, this was already a struggle.

He was far too sparing with his cross and Klitschko admitted afterwards that he just wasn’t able to set it up with the jab.  “I couldn’t find the right distance to land those shots. Tyson was quick with his hands and his body movement and his head movement,” Wladimir said. “My right hand’s supposed to land after my left, so there should have been more right hands but after the left hand. So without the right distance, I couldn’t land the shots as I wished to.”

Fury tried to clump him with a right over the top but Klitschko’s cross finally caught Tyson’s chin. Unhurt, the Briton curled a left hook into his guard before hooking him with a hefty right.

Many of the rounds were close, neither man landed much but crucially Fury was throwing more punches. The scars of battle began to tell on Klitschko’s face. Cut under the left eye, that wound began to bleed more freely in the seventh round. Beyond the blood, his face looked curiously tired. He cut a diminished figure as his tormentor grew into the bout. Before the fight Wladimir had told us he wasn’t a machine.
He’d never looked more human, not hurt, not broken, but wearily trudging forward, searching for a way through.

Fury kept in touch with Klitschko, answering his shots with blows of his own. In the ninth round he slammed in a quality uppercut. Wladimir’s right struck back hard but Fury shook it off and fought on. Klitschko put his weight behind the right again but it sailed high and wide. Before the round was out Tyson leapt after him, his lead hook scoring.

In the 10th round Fury stepped round him, hard to catch, wild now with that left hook. Their heads knocked together and Klitschko was cut on his right eyebrow as well. Tyson ground forward, heaving in his hooks. He smelled the blood, sensed it was time to fight and kept Klitschko under that pressure.

A dramatic intervention from referee Tony Weeks in the 11th round saw him take a point off Fury, for hitting the back of the head. That could have been critical. Tyson attacked the 12th round, sweeping a left uppercut through. Klitschko fought back but just to contain him. As the bell rang to end it Tyson had his fists aloft first to celebrate.

His destiny though was in the hands of the judges in Düsseldorf. “It was a very anxious moment for me waiting on the decision, with a point off,” he said.

“I thought it would be quite close, closer than what it was. So you never can tell, but I was very, very happy when I got the result,” he said.

Cesar Ramos and Ramon Cerdan both scored it 115-112, Raul Caiz Snr 116-111, all for Tyson Fury. He claims the IBF, WBA and WBO heavyweight world titles and Klitschko’s place at the summit of the division.

“We were on a 27-year mission. Every left and right turn I take in my life had led to this moment and I wasn’t going to let it slip tonight,” he continued. “It’s not come easy. 25 fights now, three world title eliminators so I earned my right to be here tonight. I wasn’t given anything for free. I had to wait in line and earn the right to fight tonight. Just all the hard work has been rewarded with these belts, to record myself going down with the legends, calling myself the heavyweight champion of the world.”

The scale of his achievement has to be acknowledged. It was one of the biggest upset wins in the sport and one of the best results for a British boxer away from home, against the number one in his division. It didn’t turn into a heavyweight firefight but Fury and his team pulled off a tactical masterstroke and he proved he had the verve and the bravery to complete the job.

“I believe that everything’s destined to be in life. God has a plan for everybody,” he said. “I was always going to be the heavyweight champion, from the first moment I laced on a pair of boxing gloves.

Wladimir Klitschko has been a magnificent champion. Unbeaten in more than a decade, he’d won 19 consecutive world title fights and over the course of his latest reign had developed such a clever, technical approach, making full use of his dimensions, he’d begun to look invincible as he took care of all his leading challengers, including David Haye, Alexander Povetkin and Kubrat Pulev. Throughout he’s conducted himself with dignity and managed to do the same in defeat. “I congratulate him tonight. He won the fight,” Wladimir simply said.

But there is a rematch clause in their contract and Klitschko gave every indication he would invoke it, though it was too early for any concrete details. “We will see how the cookie crumbles,” he said. “We’ll work it out and let you know.”

“Defeat is a learning process,” he added. “I got defeated today. I lost the battle but I haven’t lost the fighter. The fighter’s still in there. It’s always been.

This loss will have wounded him. He has come back from crushing defeat before to reclaim the world title. He reinvented himself with Emanuel Steward to become a special champion. But that was a long time ago. He’d have to overhaul himself once again and he turns 40 next year. A near era is taking over the heavyweight division, the age of Fury.

“God gave me the victory so I hope to have many more defences of these titles in the future. If I could be half as good a champion as Wladimir Klitschko, I’d be very, very happy,” Fury reflected.

While Wladimir was a sensible, serious leader, expect Tyson to be a very different kind of king. “I’m bringing the fun back to the life of boxing,” he promises.

The world has a new heavyweight champion. And he’s British. Boxing better get ready, because it’s in for a wild ride now Tyson Fury’s in charge.