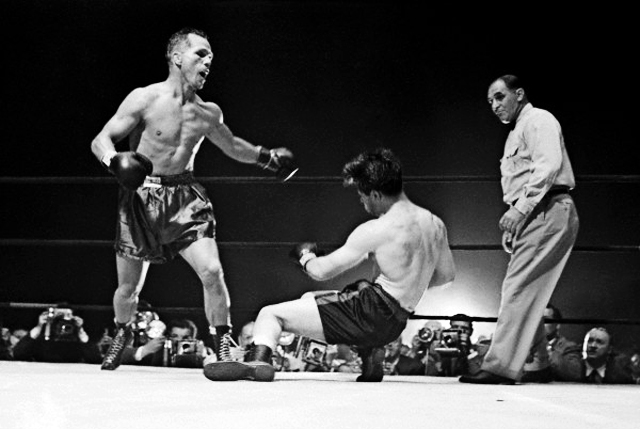 ON this day in 1948, Tony Zale stopped Rocky Graziano in three rounds during their third fight with each other, regaining the middleweight world title he had lost in their second meeting a year before.

After two thrilling contests, which both went six rounds with Zale winning the first and Graziano the second, this fight was much more one-sided with Zale dropping Graziano heavily in the first round before finishing things with a left hook in the third.

The fight took place at Ruppert Stadium in New Jersey in front of 21,497 fans, although the fight was originally scheduled for the day before but had to be pushed back because of rain.

Zale, the underdog, stormed out of his corner at the opening bell, flicking a jab into Rocky’s face before following up with a left to the body. He backed Graziano to the ropes and unloaded another two left hooks to his man’s abdomen, with Rocky responding with a hook upstairs.

Another body shot from Zale sent Graziano to the canvas, who rose at five but looked befuddled. Zale came tearing after the New Yorker, firing in hooks to his head and body. Graziano managed to fire back, but the two carried on fighting after the bell and Rocky came away with a slight cut on his forehead.

Graziano turned things around in the second, although was hurt in the first half by a left-right combination that landed flush. He then landed a left of his own, sparking a furious exchange which resulted in Graziano wobbling Zale with a series of shots. He continued the assault but Zale managed to hear the bell.

The third began with more vicious shots from both, but Zale hurt Graziano with a left hook to the head followed by a right to the body. The champion was pinned against the ropes and Zale floored him with a tremendous left hook which Rocky impressively rose from at seven. Zale followed up with another barrage of punches and Graziano went down again, this time for the full count.

After the fight, a numbed Graziano admitted he never fully recovered from the very first punch Zale landed.

“I never even remembered the last round,” he said.