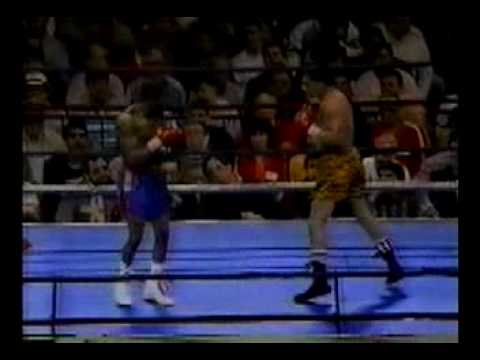 ROCKY LOCKRIDGE, from Tacoma, Washington, was making the third defence of his IBF super-featherweight title that he had claimed from Aussie Barry Michael in 1988. His challenger on July 23 1988, Tony “The Tiger” Lopez, would enjoy home advantage at the Arco Arena, in Sacramento, California.

ALMOST 11,000 turned up to roar on their greased-up hero who wore tiger skin shorts to match his nickname, and gelled his hair to match Danny Zuko.

THE IBF approved the 12-round distance, despite their ruling stating world title fights must be 15 rounds, because the state of California did not allow the extended distance.

LOPEZ, 25, started well, jabbing, moving, and countering with jarring right hands. But Lockridge – a former WBA champion – was always threat and forced the action, even after being tagged.

THE action was enthralling with Lopez, peppering the onrushing Lockridge from distance, in control by the halfway mark. The champion, bleeding from both eyes, made a breakthrough in the eighth round when he connected with a heavy right hand over the top of a Lopez left jab. The challenger went down heavily – the first time he had tasted the canvas in his career – before hauling himself upright at the count of three.

LOCKRIDGE tried desperately to finish matters, hurling maniacally for the remainder of the session, and punching non-stop through the ninth. But his energy understandably slowed, and by the 11th, Lopez was back in control.

GOING into the last, both warriors were exhibiting souvenirs of war. The wounds around the champion’s eyes had worsened, and Lopez’s right eye struggled for clarity beneath a deep swelling. Lockridge tried to finish strongly, but his wild efforts were punished, as the younger man picked holes in his defence and swatted his face with a right hand that removed his gumshield.

THE new champion admitted he was tired in the closing stages, “but I was going to keep punching until I stopped breathing.” The nature of combat demanded a sequel and the duo went into battle again in March the following year. Lopez was again the winner via unanimous decision, and went on to enjoy another world title reign at lightweight.

LOCKRIDGE soon succumbed to drug addiction, and after divorce from his wife, he was convicted of burglary in 1993. Following his release six years later, he again lost himself in lawless living, before he kicked his habits in 2009, and vowed to turn his life around.