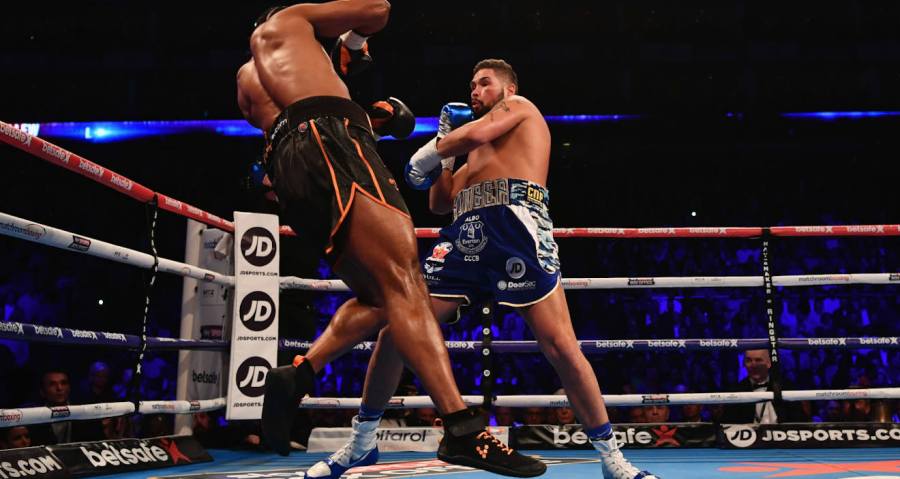 IN the 10th round David Haye stood in a neutral corner. He leant his gloves on the two taut ropes stretching out from the post. He had to hold himself up. He had shipped countless blows to the head, his ankle had collapsed beneath him, his right leg was now gone. It was a struggle to stand, let alone fight. In genuine pain, losing to a man he hadn’t conceived of being capable of beating him, Haye looked out over the crowd howling all around him. He could have quit. He could have called time at the end of the sixth round when his leg gave way. He could have surrendered during the pummelling he took in those subsequent rounds. He could quit now. Instead he turned back to Tony Bellew, to limp out to meet him and lose the fight.

This was not how it was supposed to unfold. Haye was bigger, much more powerful, a well-established heavyweight. Bellew, when he had called out David Haye, was a talkative cruiserweight world champion who had surely bitten off more than he could chew. The near universal expectation was that Haye would knock out his antagonist. Bellew is hardly a paragon of politically correct virtue but Haye’s low jibes, that these would be Tony’s “last days” and so on ad nauseam, were all the more distasteful since he was indeed going into this contest with all the advantages. The fear was that he would hurt the Liverpudlian.

Haye seemed to have no doubt of that. But he started the fight wildly. He swung heavy overarm shots from the first round, missing Bellew. His range and timing were out. Tony countered with a left hook that tipped David back on his heels for an instant. That might have instilled some respect. In the first half of the fight Haye became more measured. He clipped Bellew with almighty left hooks and a stunning right. The Liverpudlian remained patient, looking to stay clear and counter when he could. Indeed Bellew confounded many simply by reaching the sixth round.

That was when Haye sustained his injury. He slipped and immediately it was clear something was badly wrong. He wobbled, concern etched all over his face. Bellew lunged after him as the Londoner reeled away. Eventually Tony put him down. David just made it off the canvas at referee Phil Edwards’ count of eight. He survived a torrid round but finished shaking his head at the bell.

“In my mind I was thinking I’m going to be hit by a bus. And you know what, I was going to get up and run over it,” Bellew said. “I kept doing what I had to do. It’s just crazy.”

Haye’s own pre-fight boasts would haunt him. He did suffer. The Londoner struggled out for the seventh round, hanging on the ropes for balance. Bellew poured in punches hammering away at Haye. But he could not finish it then. The former heavyweight world champion endured the punishment, taking those hits. He fought on, creeping along the ropes in the eighth round, clipping a reckless Bellew with a left hook that he heaved across. But David had to punch with his arms, he could not twist his full body weight behind his shots now. Tony came back at him, slashing right hand punches down. Haye absorbed them as the Liverpudlian seemingly began to punch himself out.

By the ninth round, straining against the bigger man, Bellew was gasping for air. Haye, tottering away from the ropes into the centre of the ring, somehow managed to launch right hands. These were however desperate efforts, a search for one punch to salvage a victory that, until the middle of the fight that is, had once been inevitable. But it was not to be. In the 10th round Bellew was punching more freely once again. He finished the session landing a one-two, then left after left. Haye was reeling. But he would not yield.

The end had to come, not before time. In the 11th round, inexplicably given his ruined leg, Haye sprang forward to smack a cross into Bellew’s head. But the Liverpudlian came back at him, drumming in punches. The sustained attacked forced Haye into the ropes. Bellew flung hooks across and the weight of the blows drove David through the strands. Haye had to roll over and clamber agonisingly back into the ring. His corner finally had seen enough and trainer Shane McGuigan threw in the towel. The finish came at 2-16. David Haye had been humbled.

But for a man who had notoriously put his loss to Wladimir Klitschko down to an injured toe Haye was magnanimous in defeat. He held up Tony’s arm in victory and made no excuses. He would have surgery for a ruptured Achilles tendon the following day but said, “Tony was a great fighter. That’s what went wrong. I trained great, I felt good coming into the fight.”

“I did not expect him to have the chin and durability that he had. I gave it my best shot. My best wasn’t good enough tonight,” he continued. “I’ve never been in a fight like that before. And if the fans want to see it again, I’d love to do it again.”

It is however a serious injury that he needs to recover from, at 36 years of age, at the end of a career that was almost curtailed by a shoulder operation a few years ago. If this is David Haye’s last appearance in a boxing ring, then after this display of belated dignity, for me at least, he is redeemed.

Tony Bellew already has achieved more than most believed possible. A WBC world champion at cruiserweight this was a simply stunning victory at heavyweight, as unlikely an upset as we’ve seen in a British ring.

“This circus is going to keep following me now,” Tony said without enthusiasm. “I’ve done what I needed to do,” Bellew continued, the emotion audible in his voice.

“I’m far from Rocky. I’m an ordinary fella. Who just can’t give in. I can’t back down.”