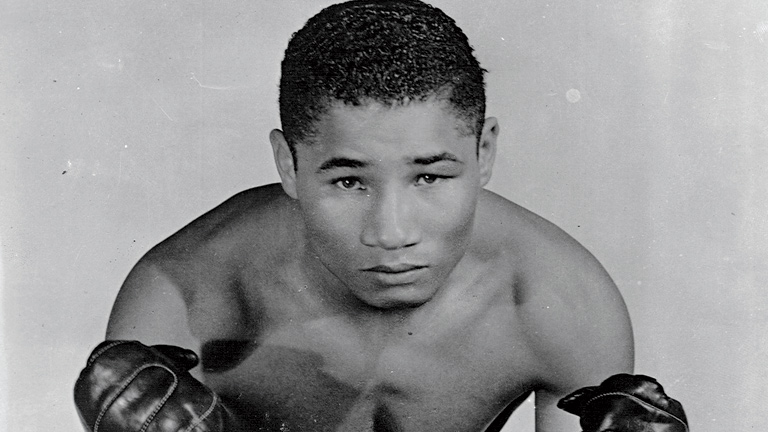 IKE WILLIAMS stopped punching the barely conscious Beau Jack and begged the referee to end the contest. But Charlie Daggert – seemingly transfixed by the slaughter – hadn’t seen enough and instructed Williams to continue. Jack’s head was soon under attack again, defenceless, bloodied, and bouncing around like a lottery ball. Eventually Daggert stepped in and ended the horrific 1948 encounter.

DID YOU KNOW?
Referee Charlie Daggert was the official who counted to 10 over a stricken Jersey Joe Walcott as he lost his world heavyweight title to Rocky Marciano.

“He got me pinned up in a corner and I couldn’t get away,” the battered loser understated afterwards. “Williams is a great fighter.”

And so was Beau Jack. A man of incredible will and courage, Jack’s crash-bang-wallop style lacked elegance but enthralled audiences and defeated most of his rivals. That mesmerising menace was developed early in life. Born Sidney Walker in Waynesboro, Georgia his grandmother nicknamed him ‘Beau Jack’ and by the age of 15 he was slugging away in “battles royal” (African-Americans brawling for the amusement of white spectators).

He polished the fury and became a professional boxer, aged 18, in 1939. By the time he landed the New York version of the world lightweight title with a stoppage win over Tippy Larkin just three years later, he was a major attraction and a staple headliner at New York’s Madison Square Garden. Bob Montgomery would take his crown in May 1943 but Jack claimed revenge in November only to lose it again to the same man the following year. It would be 1948 before he got a title chance again, and it ended where this story began, in a shellacking at the clenched fists of Ike Williams. But even after that gruesome demise, brave Jack wanted more. He and Williams engaged in three further battles but Beau, try as he might, failed to get a victory in any of them.

STING IN THE TAIL
Prizefighters like Jack should want for nothing later in life but Beau could not rest once he walked away from the ring. Despite enjoying a period as one of America’s most popular boxers he was forced to shine shoes for a living – a job he had before turning pro – after his 1955 retirement. Nine years after being inducted into the International Hall of Fame in 1991, Jack died from complications with pugilistic Parkinson’s syndrome.