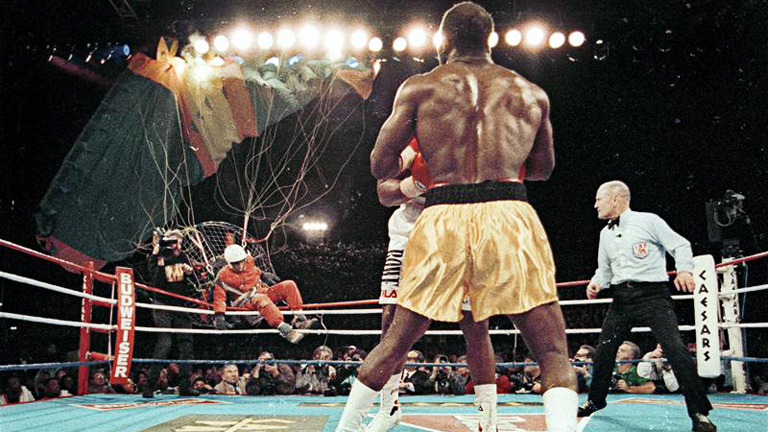 BOXING has never seen a stranger incident. About a minute into the seventh round of Riddick Bowe’s rematch with Evander Holyfield at the open-air Caesars Palace arena in Las Vegas on November 6, 1993, a “lunatic parasailer” crash-landed ringside to create “the most dramatic occasion in the history of boxing,” according to Harry Mullan’s ringside report.

James Miller, 30, disturbed what was a “magnificent championship battle” for Bowe’s WBA and IBF heavyweight titles. The delay took 22 minutes, and MC Michael Buffer kept the crowd of 14,242 calm by talking to them throughout.

When the action continued, Holyfield worked toward another unforeseen event by outpointing Bowe on a majority decision to become only the third man in history to regain world heavyweight honours, with Floyd Patterson and Muhammad Ali being the first two.

Holyfield’s performance in a thrilling fight made the night “unforgettable anyway,” besides Miller’s bizarre intervention.

Bowe had unanimously outpointed Holyfield the year before, leading Evander to be considered as the underdog heading into the rematch.

However, under new trainer Emanuel Steward, the 31-year-old outboxed and outgunned a “bloated” Bowe by sticking to a measured game plan, and the pair tried to continue scrapping after the final bell.

The third and final chapter of their fierce trilogy happened two years later, when Bowe became the first man to stop ‘The Real Deal’ Holyfield.