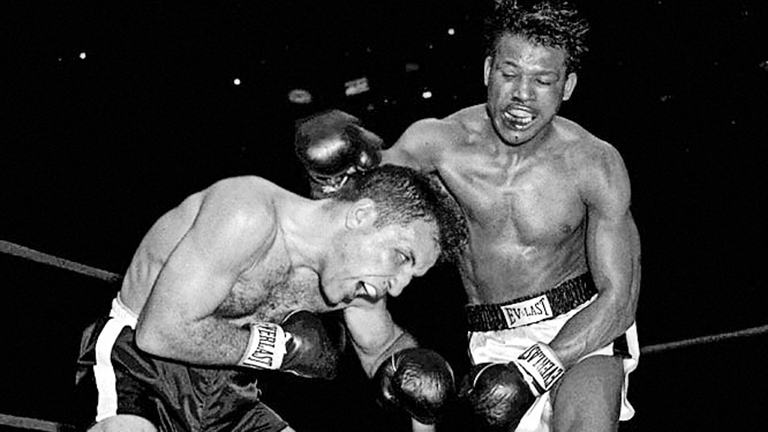 THE greatest ever, Sugar Ray Robinson, 30, was a 3-1 betting favourite going into the fight at the Chicago Stadium on February 14, 1951 against the 29-year old champion, Jake LaMotta, from the Bronx.

THIS was the sixth, and final, meeting between the pair. Robinson had won four of the previous five, but LaMotta was the first man to have defeated Sugar Ray in 41 fights back in February 1943.

IN our preview, Boxing News stated that this was the one great advantage in LaMotta’s favour – the fact that he was the only man to have beaten Robinson as a professional. Were Sugar Ray to win, it was expected that he would relinquish his 10st 7lbs honours and concentrate on the middleweight division.

BOXING NEWS stated in its fight report that LaMotta held his own during the early rounds and in the fourth fought back furiously, but the easy moving Robinson cleverly evaded LaMotta’s storming two-handed assaults to the body.

AFTER surviving a punishing two-handed barrage in the seventh and eighth rounds, Robinson cut LaMotta’s eye with a furious counter attack to the head and body in the following session. The champion made another desperate effort to break through in the 11th but Robinson, with cool, superb covering and countering, reduced LaMotta’s efforts to wild, unsuccessful bursts.

THROUGH the remainder of this round, and the following session, blood streamed from facial cuts as he groped round the ring lunging forward with powerless punches. Groggy, helpless LaMotta was sagging at the knees, desperately holding his rival in an effort to avoid a knockout defeat as Robinson punched away at will when the referee intervened.

AT THE TIME of the stoppage, referee Frank Sikora had Robinson ahead 63-57, Franklin McAdams had it 65-55 and Ed Klein scored it 70-50 all for Sugar Ray.

AS A RESULT of the beating LaMotta took in the later rounds, where he absorbed as severe a beating as any man had ever taken in the ring without falling to the canvas, the fight became known as the ‘St Valentine’s Day Massacre’.

IT was at the end of this battle that the groggy and defiant Bronx Bull muttered: “You never got me down, Ray” and later famously said: “I fought Sugar Ray so often, I almost got diabetes.” This win was the first middleweight title for Robinson, who would capture the title four more times over the next nine years before retiring in 1965 as the greatest fighter in the history of the sport.