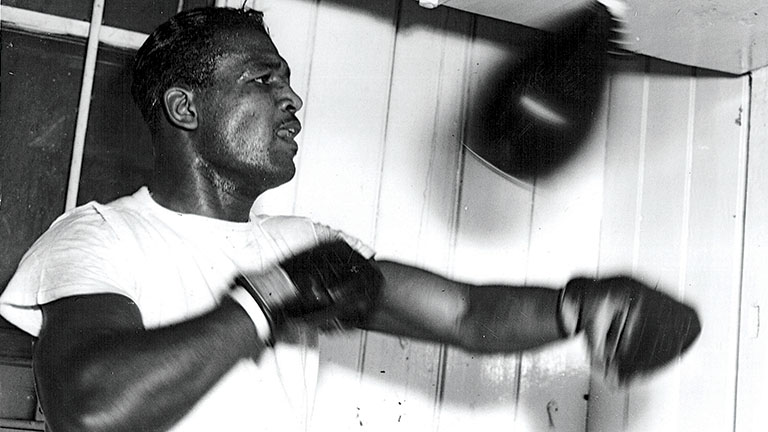 BELIEVE it or not, but when Sugar Ray Robinson was still competing the magnificent American wasn’t even hailed as the greatest ever welterweight or middleweight, never mind the finest fighter the sport has known.

It is, of course, harder to judge a man when he’s still fighting. But it wasn’t long after Robinson finally called time on a remarkable career before boxing folk recognised the super-smooth former two-weight world champ as being in a class of his own.

That reputation has gathered momentum and now, more than 50 years on since his final fight, it’s pretty unanimous in a sport full of questionable decisions that Robinson is the most complete fighter ever to set foot in a ring.

One can only marvel at his achievements: how he kept coming back to win the world middleweight title; had the audacity to challenge for – and nearly win – the light-heavyweight crown when he was effectively only a light-middle; took on the hardest men around during an era of painful bruisers and seriously classy operators; continued to box at a respectably high level to the end, losing in his final bout to the world’s top contender.

Of course, he lived and boxed in a vastly different period, when, for starters, television didn’t have the prevailing say on dates and opponents.

Had Robinson been around today – operating under the current constraints – he’d have made a fortune all right, but I doubt he’d have graced us with far more than 50 appearances.

Sugar Ray would probably have won world titles in five divisions instead of only two but boxed mostly on pay-per-view television.

Robinson shone when there were only eight weight categories and eight champions and to jump from one division to another often meant conceding about a stone.

It’s no real secret how he succeeded, because in any sport the combination of special talent with a will to succeed and solid work ethic brings considerable reward.

Whether he’d have been quite as supreme in today’s world, what with so many distractions and being limited by the number of television dates, cannot be known.

Robinson certainly preferred to stay active. In the early days he didn’t lose many, but wasn’t afraid of defeat or matched guardedly.

Mike Tyson is the only major American in recent times to have been groomed in the old-style fashion – fighting almost weekly on small club shows.

But while Tyson challenged for a world title in only his second year as a professional, Robinson had over 70 fights before landing his first opportunity and in 10 of the 25 years he boxed professionally had 10 bouts or more.

Nowadays, usually only those who pass their trade competing in four and six-rounders strictly as opponents reach the 100-fight milestone. But Robinson doubled that total and often by doing 10 and 15-rounders, so his exploits are bordering on the miraculous.

His longevity is what separates him from, say, Sugar Ray Leonard. But he shared with our other Boxing Heroes, Leonard and Muhammad Ali, that admirable ability to rebound from setbacks.

Repeatedly Robinson confounded those who thought he’d produced his final act of defiance, though that urge to achieve the improbable ultimately was self-destructive.

Again like Leonard and Ali, Robinson was a handsome man with charisma who looked the part in every way. Outside the ring he had presence and in it was sophisticated and brilliant.

He could take a man out with one punch or whip him to the canvas with a succession of hooks. He was prepared to go to war or put on a boxing exhibition.

Robinson was built perfectly for the job: tall, long-limbed and always trim. You can’t find a picture of him overweight. When he wasn’t in the gym, Robinson was usually in nightclubs dancing. But he fought so frequently he didn’t have time to indulge himself too much in misadventure. He was also prepared to travel. He fought all over the US and ventured to Europe and beyond, too, never fearful of conceding home advantage.

It is in Britain that he lost to Randy Turpin. Though Robinson was clearly more talented than Randy, the Brit possessed a style (and jab) that posed Sugar Ray no end of troubles. But if someone beat Robinson, Sugar Ray didn’t hesitate to fight him again.

So Sugar Ray Robinson’s record is filled with familiar names and I doubt anyone in the history of the sport has dared face so many capable and formidable adversaries.

His six-fight rivalry with Jake LaMotta is legendary. In fact, during a spell in February 1943 he completed three 10-rounders on successive weeks, two of them against “The Raging Bull”.

That same year Robinson also defeated another all-time great, Henry Armstrong, whose distinction is holding world titles in three divisions all at the same time and by then was hugely experienced and on a seven-fight winning run.
Within 12 months of going pro Robinson had licked Marty Servo, who was undefeated and went on to win the world welterweight crown, and Sammy Angott, who months later became world lightweight king.

Robinson was the master and if you didn’t know that already this article should help convince you.