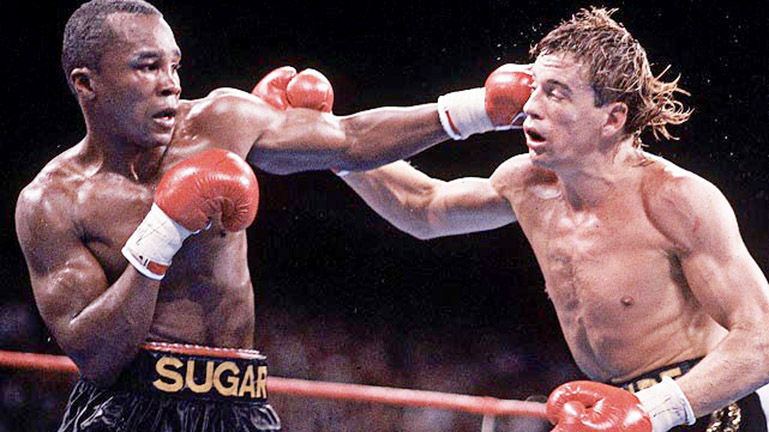 A historic night for the slowly fading Sugar Ray Leonard

ON November 7 1988, Sugar Ray Leonard took on Donny Lalonde in an attempt to become the second man after Thomas Hearns to become a five-weight world champion.

The two men clashed for the WBC light-heavyweight belt, held by Lalonde, as well as the brand new, inaugural WBC super-middleweight title at Caesars Palace in Las Vegas. Historians and fans scoffed at the new title, but no matter. It was Leonard’s first fight for 19 months, and just his third fight in seven years, but he was still expected to make around $15m.

It was also Leonard’s first fight without revered trainer Angelo Dundee in his corner. The two parted ways due to a money dispute and Leonard was trained by Janks Morton and Dave Jacobs for the upcoming fight with Lalonde.

Leonard weighed in at 165lbs for the fight – his heaviest ever weight – remaining in his warmup suit on the scales, whilst it was also revealed after that he also had silver dollars in his pockets when he took to the scales.

Lalonde weighed in two pounds heavier and taunted the legend saying, “I’m not only fighting an old welterweight, I’m fighting an old, fat welterweight.” Entering the fight though Lalonde was the underdog, as Leonard was the 3-1 favourite, but that didn’t faze the defending champion in the slightest.

Lalonde stamped his authority on the fight early, taking advantage of Leonard’s ring rust, as well as his natural size advantage and began to press and try rough Leonard up on the inside.

Lalonde kept marching forward, dropping Leonard in the fourth with a huge right cross. However, with that right cross, he only managed to bring Leonard back to his senses and took a hiding from that moment.

Leonard took control and then in the ninth, he went in for the finish. Lalonde went down first through a stiff left hook, rising on unsteady legs after a count, but Leonard could see he was there for the taking.

Immediately Leonard charged in, dropping Lalonde with a right cross and a left hook giving referee Richard Steele no choice but to stop the fight and “Sugar” Ray became the second man to win world titles in five weights, three days after Thomas Hearns achieved the original feat.

Leonard, would vacate his light-heavyweight belt immediately after the fight with Lalonde, and he and Hearns would clash in June 1989, both putting their super-middleweight belts on the line in a fight that ended a draw at Caesars Palace.

As for Lalonde, he was scheduled to take on Dennis Andries for the now vacant light-heavyweight title, also in June 1989, but he retired a month before the fight was meant to take place saying, “I can no longer justify hurting people for my own gain”.

He did return two years later in 1991 and fought on and off, before finally retiring in 2003, whilst Leonard was inducted into the Hall of Fame in 1997 and is one of the premier legends of the sport.

Sugar Ray Leonard was ranked No.5 in the Boxing News 100 Greatest Fighters of All-Time. Order your copy here