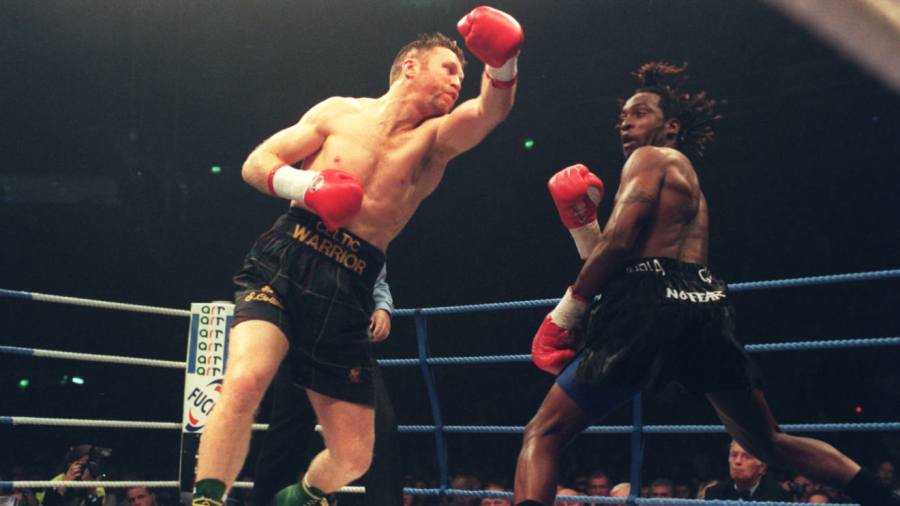 THE super-middleweight division has always been a favourite on these shores and in the early to mid-1990’s, three men enthralled and entertained the masses. Chris Eubank originally led the way, but Nigel Benn and eventually Steve Collins took over, with Collins holding two victories over both his rivals and on November 9 1996 Collins recorded a second victory over Benn; the last time we saw “The Dark Destroyer” in the ring.

The two men returned to the scene of their first fight, the then-named Nynex Arena in Manchester, where Collins had initially vanquished Benn in four rounds, when the slugger retired on his stool due an ankle injury.

Four months later we were back in Manchester with Benn looking for redemption and Collins looking for a definitive and more emphatic victory. Once again the WBO super-middleweight belt was on the line and once again, Benn retired on his stool, although this time there was no injury.

Collins was always relentless in his assaults, but Benn carried the knockout power which made him one of the most watchable and exciting fighters that Britain has ever produced.

Many fans hoped for one more standout performance from Benn, but his heart did not seem in it on the night and he took a systematic beating at the hands of “The Celtic Warrior”.

“The Dark Destroyer” maybe should have quit earlier, but he was never a man to back down from a challenge. Benn tried to trade with Collins, but nothing he tried worked and at the end of the sixth round he signalled that he wanted no more to referee Paul Thomas.

Benn retired following the fight, although there were rumours of a comeback, “The Dark Destroyer” was never back between the ropes, despite Collins’ assumption after the fight that he would be back.

Collins fought twice more in 1997, defending his title against Frederic Seillier and Craig Cummings, but an injury in training scuppered a fight with Joe Calzaghe in Sheffield later that year. It was Eubank who took the fight instead, where those in attendance witnessed the beginning of a legendary career at world title level.

But the fights between Collins and Benn, although not the barnstormers that were expected, are huge in British Boxing history and both remain iconic figures in the super-middleweight division.