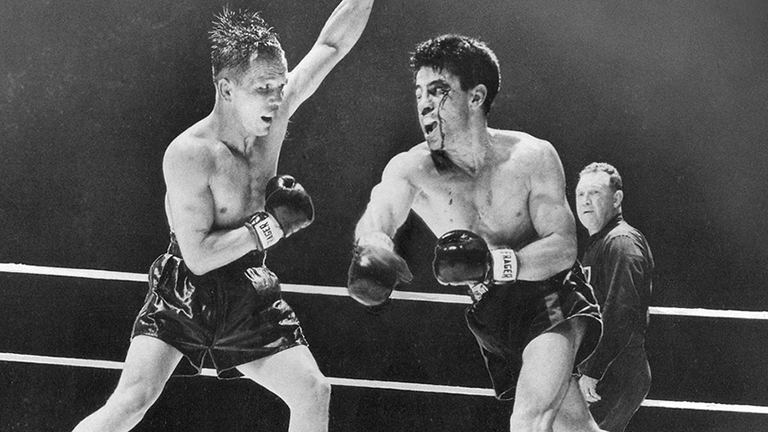 On July 16, 1947 Rocky Graziano and Tony Zale engaged in part two of their legendary trilogy, by George Zeleny

NEARLY a year after their first sensational clash, Tony Zale and Rocky Graziano met again in Chicago. A then-indoor record crowd of 18,547 turned out on a stiflingly hot night to see Graziano, one eye closed and cut, gain revenge by hammering Zale so unmercifully in the sixth round that the referee had to stop the mayhem.

The return matched their first encounter in its ferocity and crowd appeal. Zale took the fight to Graziano from the start, punishing him to the body and raising a lump over his left eye. In the second Zale switched his attack to the head, targeting the damaged eye. The wounded challenger hit back with his trademark smashing right and towards the end of the round caught Zale so hard the champion staggered and went to the wrong corner at the bell.

Zale got back on top in the third. His accurate shots bounced off Graziano’s head and he scored a flash knockdown. Rocky was hurt and took a pounding on the ropes as the round ended. Zale was now forging ahead on all the scorecards and Graziano spent the fourth wiping the blood from his damaged eye while hunting the champion down. Zale did go to the canvas but more from a slip than a punch.

Legend has it that Graziano’s trainer Whitey Bimstein took a coin to the swelling on his eye in the interval so that Rocky could regain some vision.

The heat was intense reaching 120 degrees under the ring lights and by round five the older Zale was showing signs of fatigue while the rampant Graziano came on. A right to the head steadied Zale and seemed to take the steam out of him. Graziano attacked relentlessly and after a brief comeback from the champion in the sixth a crashing right sent Zale reeling.

Rocky chased him across the ring and three more rights put him down for the count of three. The champion was in deep trouble and a furious fusillade of punches drove Zale to the ropes where he was pounded at will. “The Man of Steel” turned sideways and collapsed over the middle strand, his head hanging outside the ropes as Rocky kept punching. Referee Johnny Behr jumped in at 2-10 of the sixth round.

Graziano grabbed the ring microphone uttering the immortal line: “Hey Mom! Your bad boy done good. Somebody up there likes me.”