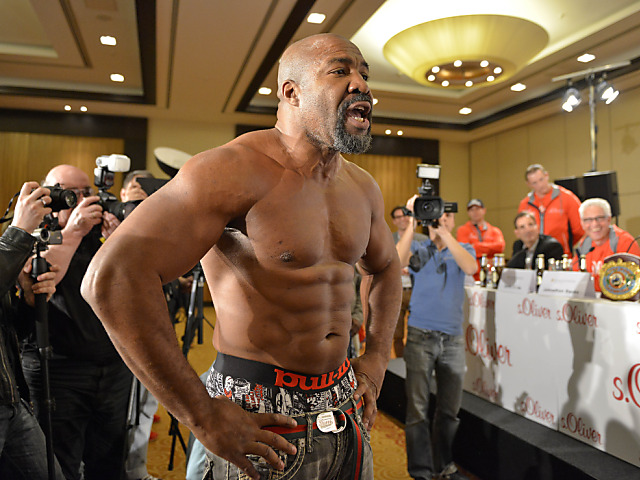 As he turns 43, Shannon Briggs explains why his comeback will deliver the goods this time

WHEN Shannon Briggs turned professional in 1992, a lot was expected of him. Built like a world heavyweight champion, and with a mouth to match, the charismatic New Yorker was watched closely by boxing fans as he feasted on poor opposition with ease. By 1996 he was 25-0. Along came Darroll Wilson, knocked out an exhausted Briggs in three, and the spluttering “Cannon’s” reputation was never the same again.

He would agree his career has, largely, been a disappointment. Briggs’ biggest victory – a 1997 points win over George Foreman – was so controversial, it may have well been a loss. He proved his bravery and durability, in a 1998 defeat to Lennox Lewis, and an emphatic 2010 drubbing Vitali Klitschko. In between there were smatterings of promise, the beatdown of an ancient Ray Mercer, the last-gasp win over Serhei Liakhovic to win the WBO title in 2006, but on the whole, despite his obvious talent and punching power, Briggs has not delivered on his promise.

Perhaps that’s why he’s back after a long four-year layoff, harassing Wladimir Klitschko in the hope of getting a shot at him. Perhaps he needs the money. Maybe it’s a bit of both. Certainly, Briggs’ return – whipping his overweight frame down to impressive shape and barking that he’s stronger than younger men – has all the attributes of a mid-life crisis.

But he will say otherwise. So let’s hear his take on his career, and comeback, as he turns 43. Happy Birthday, Shannon.

BN: Just over a year ago you started to get yourself into shape. What was going through your mind at that point in your life? Was a comeback the plan or were you just looking to lose weight?
Shannon Briggs: I wanted to come back. I was in a bad place physically and mentally. Spiritually I was down. After the Vitali Klitschko fight [October 2010] my life went in a different direction. To get to this point a lot of things had to happen. I went through dark and rainy days, but I had to find the perseverance to continue on, the will and the drive. What else could I do? I have three kids, a wife, I can’t lose everything. The biggest thing on my mind was my childhood when I was evicted and I lost my home. It was climbing over my back. What am I going to do now? After the Vitali fight I got a job, I started my own business, I got a job working for a marketing company. Things were chaotic, but that was life. It was like, ‘what’s next?’ What’s next was to win the heavyweight championship of the world. I had to get back in shape and I still had something left in the can.
Even though my career has lasted 20-plus years, I only had three or four really tough fights. I said to myself, I’ve always had this gift inside of me, so now it’s about showing it. I would hate my career to have ended and not showing the world what I had. I will show that gift when I knock out Wladimir Klitschko.

A lot was expected of you when you burst onto the scene all those years ago. Do you feel there is unfinished business? That you did not fulfil your potential?
Totally, totally. But not all of it was my fault. But that’s life. I didn’t always have the right trainer, the right manager, the right promoter. Not many fighters have it all, though, or the opportunities I had. Don’t misunderstand me, I’m not trying make excuses because it is what it is. That’s all in the past. I feel phenomenal, I’m in superb shape mentally, physically and financially. Everything is working out at the same time. Now I’m coming back to prove what Shannon Briggs is made of.

Why do you think you can put it all together now, when at certain points in your career, when you were a lot younger, you couldn’t?
(Pauses) It was circumstances. I was to blame for half of those, if not more. I wasn’t focused on boxing as a career, as a lifestyle. I’d have a fight coming up, then we’d get in shape, then we’d train for the fight. But boxing has evolved, in the way that man has evolved. Look at Floyd Mayweather on 24/7. Look at Bernard Hopkins getting ready for a fight. Damn, these guys stay in shape all year round. My career had its spots. That was it. But that’s the past, bro. Listen, I’m so happy about today with everything that’s going on. I run up on Klitschko yesterday and I have a ball. The whole world is talking about what I’m doing, about Shannon Briggs. I appreciate it. But I’ve got to show the world, and the world has got to see, that I’m forever talented.

I remember you telling me before the Vitali Klitschko fight something I thought was quite candid. You said, ‘I can always sell a fight but I may not win it.’ Again you are showing your ability to sell a fight, but do you honestly believe you can beat Wladimir Klitschko?
100 per cent. I could have beaten Vitali Klitschko. Come on. I fought him with one arm for 11-and-a-half rounds. While he was punching me, I would have been punching back. Come on. I was trying to defend myself and punch with one arm at the same time. That’s impossible, man. Look who I was fighting. The supposed best puncher in boxing. That would have been a war if I had two arms. Nobody is giving me credit. He retired on his stool after injuring his shoulder against Chris Byrd and gave up his world title. I stood and took a beating for 11-and-a-half rounds. I didn’t quit! And I didn’t get paid for it! Listen, I’m back now. I’m the lone wolf. I don’t have a manager. I don’t have a promoter. I have done this all on my own. Everybody turned their back on me. Look at me now. I’m a piece of steel. I’m made of iron, bro. I’m resilient.

Have you had any indication from Wladimir that he wants to fight you?
He wants the fight. He’s sick of me challenging him, of me harassing him. He’s annoyed by me. Now, I’m going to kick his ass.

What weaknesses do you see in Wladimir?
I see a lot. I can’t tell you everything right now because I’ve got to save some of this shit for him, you understand what I’m saying? He can’t beat me.

Do you wake up in the morning and think, ‘I’m going to go and harass Wladimir Klitschko today’ or is it all pre-planned?
I’ve been looking for him. He doesn’t live too far away from me so I try to catch him here and there, at the supermarket and shit like that. I throw shoes at him, oranges at him.

No offence, but none of your comeback opponents come close to the level of Klitschko. Is there a plan to increase your level of opposition?
There is no level of competition that can compare to him. I’m glad you asked this question. I’m 42 years old, why would I risk everything? Guess what? I already proved myself. I’ve been in this game for 27 years. I’ve had quick knockouts and I went 12 rounds [against Raphael Love] to show people I could go 12 rounds. It was a sparring match. I could have closed my eyes and knocked him out anytime I wanted but I needed the rounds. I got a title, a world ranking, it served its purpose. Why should I fight anyone to risk that when the man I want is sitting there. Who else is he [Klitschko] going to fight anyway? Look at his opponents. [Alex] Leapai? Who did he fight that was the calibre of Klitschko? Who will sell more tickets? Me or Leapai? Me or [Kubrat] Pulev?

There was a rumour that you were going to step in and fight Ruslan Chagaev at the last minute for the WBA title. Was that true?
That was true because I weighed it all up. He’s been around as long as I have, he’s a shorter guy, he hasn’t been active and I don’t think much of him as a fighter. He’s not terrible, he’s the WBA champion. I looked at the risk-reward, and it was worth it. But the money wasn’t there and at my age, for a fight like that, the money has to be there. Listen. I’ll be honest with you. This is a business. I like that Floyd Mayweather has educated the world about that. Boxing is a business. I know everyone says, ‘Go fight this guy, go fight that one’. They don’t understand that this is a business, and your body, is your body. My body might go for a thousand miles, it might go for a million. I have to be careful with my body, and I have to be smart about it.

So what’s the next move now? Are you going to wait for the Klitschko fight to materialise or do you plan to keep on fighting?
I’m going to be staying busy.

We’ve seen the videos of you and Wladimir. When the cameras stop rolling is there any camaraderie or jokes between the pair of you?
Not at all. This is no laughing matter. We ain’t friends. I want to kick his ass. I want all the belts.

One last thing. While getting fit you shaved your head. You replaced the dreadlocks with a bald head. Why?
When I cut my hair everyone was like, ‘Wow. Oh my god’. The next reaction was, ‘It’s over for you.’ They said my hair was my brand, my hair was my strength. Are you kidding me? And I was fat at the time. I ballooned up to 357lbs which was my all-time high. So when I cut my hair, I looked like a fat bald shitface. I looked like Homer Simpson. Everyone thought I was finished. So I got serious about the training. I was determined to look good. I ate and slept training. I changed my diet. I started to look better. Then I went into beast mode. Then people said, ‘Damn. This mother f***** looks like The Rock.’ Now I’m ready to go.