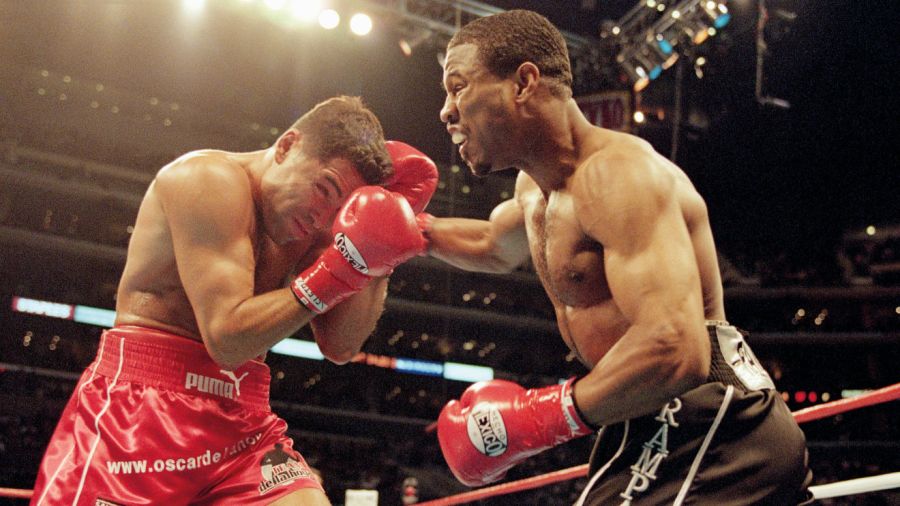 Sixteen years after they first fought as amateurs, Mosley and De La Hoya go hell for leather in Los Angeles

SHANE MOSLEY w pts 12 OSCAR DE LA HOYA
June 17, 2000; Staples Center, Los Angeles, CA
THOUGH Oscar De La Hoya’s 1999 disappointing and controversial points loss to Felix Trinidad fell below expectation, the “Golden Boy’s” clash with Shane Mosley exceeded it. Sixteen years before, as school boys, the two engaged in the first of many amateur rounds they shared. De La Hoya, the pre-fight favourite edged ahead in the first half before Shane, switching stance and utilising his jab, took control in the second half.

“The bad memories of the Trinidad fight has been erased, this has been a war,” Jim Lampley yelled in the last round as De La Hoya took a booming right hand. Indeed it had, and this time there would be no debate that the right man won.

DID YOU KNOW? Before the fight – the first boxing match to be held at the Staples Center – the crowd were treated to a track from Oscar De La Hoya’s recently released album. The song, With These Hands, was written by Diane Warren.

WATCH OUT FOR: Okay, it wasn’t quite Ward-Gatti, but the exchanges in the ninth round were loaded with skill, speed and spite.